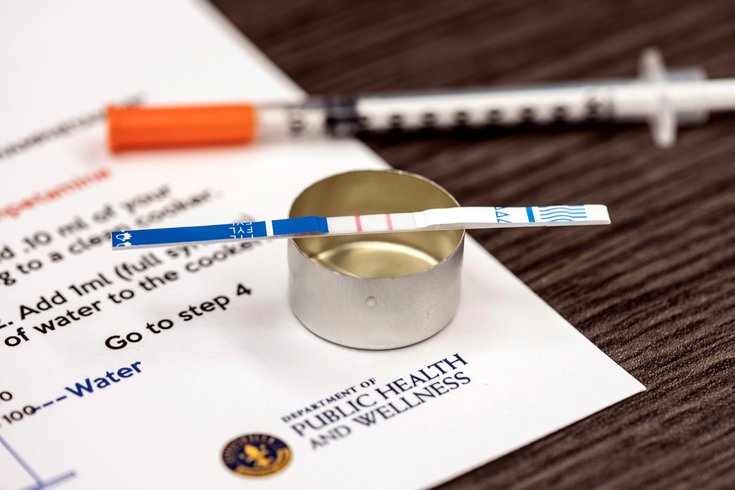 A bill that would decriminalize the use and distribution of fentanyl test strips advanced out of the Pennsylvania state House on Monday. Rep. Jim Struzzi said that his bill would 'reduce overdose deaths' by expanding the use of testing products, rather than classifying them as 'drug paraphernalia.'

A bill that would no longer classify fentanyl test strips as illegal paraphernalia was advanced out of the Pennsylvania House on Monday.

Originally introduced by Indiana County Rep. Jim Struzzi in 2019 and reintroduced in 2021, the bill seeks to reduce fentanyl overdoses by removing legal barriers around test strip use. Currently, many parts of the state criminalize using the test strips and possession can carry serious penalties.

Decriminalizing fentanyl test strips is another form of harm-reduction. Rather than punishing those experiencing addiction, the legislation aims to reduce overdoses by raising awareness of the dangers of controlled substances and providing resources to users.

The bill received unanimous approval from the House Judiciary Committee in May, setting the stage for bipartisan support of Struzzi's long-awaited legislation.

"Fentanyl is one of the leading causes of overdose deaths, and nearly half of our states have taken this course of action for individuals who are in the grip of addiction," said Struzzi. "I'm also glad to see the bill was amended to expand the definition of 'testing products,' as we anticipate the next wave of dangerous, controlled substances that could unfortunately impact our society."

The bill would completely remove fentanyl test strips and other testing products from the list of classifying drug paraphernalia, in an effort to reduce the number of overdose deaths in the state and enable those using opioids to be made aware of the amount of fentanyl found in their substances.

If passed, the definition of "drug paraphernalia" would not include "testing products utilized for personal use in determining whether a controlled substance contains chemicals, toxic substances or hazardous compounds in quantities which can cause physical harm or death."

In May, Attorney General Josh Shapiro released a special report warning the public that fentanyl is becoming the dominant and most prevalent opioid in Pennsylvania. The synthetic drug is more potent than heroin and has contributed to a significant rise in overdose deaths throughout the state.

Gov. Tom Wolf supports Struzzi's legislation as part of his administration's efforts to combat the overdose crisis throughout the state.

"The administration is supportive of this legislation and recognizes that harm reduction is an important part of our fight against the opioid and overdose crisis," said Elizabeth Rementer, the governor's press secretary. "The governor, who throughout his administration has prioritized addressing substance use disorder and preventing opioid overdoses, looks forward to signing this bill into law and also urges swift passage of companion legislation to legalize syringe services programs in the commonwealth."

Though fentanyl test strips remain criminalized throughout much of the state, some municipalities have begun to decriminalize them, including Philadelphia and Pittsburgh.

In August 2021, Mayor Jim Kenney officially decriminalized the possession, use and distribution of fentanyl test strips via executive order as a harm reduction strategy meant to encourage people to spread awareness of the amount of fentanyl in the substances they're using.

At the time, Kenney noted that that the city needed to utilize every resource and available method to save lives amid the widespread opioid crisis.

"We gain nothing by penalizing the distribution and use of fentanyl test strips, which are proven to help people assess and reduce their risk of overdose," Kenney said. "Fentanyl test strips are a life-saving tool that we encourage people to have, use and share with others."

Pittsburgh Mayor William Peduto later followed suit that month, signing his own executive order prohibiting arrests for the use or distribution of fentanyl test strips.

In his direct order, Peduto noted fentanyl was found in 77% of Allegheny County overdose deaths in 2020 and that the COVID-19 pandemic made things tougher on those experiencing addiction, with isolation often leading to increased substance use and frequency.

Struzzi's bill heads to the state Senate in the coming weeks for another vote.