Would a federal gas tax holiday help drivers? A decision may come soon

With soaring fuel prices, Pennsylvania and New Jersey are among the states weighing their own tax breaks 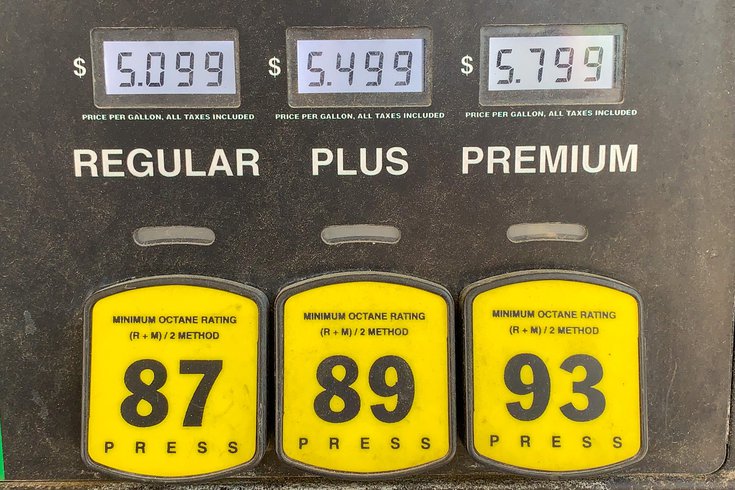 The price for a gallon of regular gas in the United State reached nearly $5 on Monday. President Joe Biden will consider the possibility of a federal gas tax holiday to provide relief to consumers.

President Joe Biden's administration is now weighing the possibility of a federal gas tax holiday, which would temporarily suspend the 18.4 cents per gallon tax that supports the nation's Highway Trust Fund.

The White House will consider this week whether such a move could provide measurable relief to U.S. consumers, who have been hammered by months of rising fuel costs and an economy marked by high inflation.

“Yes, I’m considering it,” Biden said Monday in Delaware. “I hope to have a decision based on the data — I’m looking for by the end of the week.”

Regular gasoline prices stood at a national average of $4.98 per gallon on Monday, with some parts of the country facing significantly higher prices. In Pennsylvania, the average price reached just over $5 per gallon. In New Jersey, the average price hit $4.99. Fuel prices have been rising since the second half of last year and accelerated after Russia's invasion of Ukraine in February.

Sens. Maggie Hassan (D-New Hampshire) and Mark Kelly (D-Arizona) introduced legislation in February to pause the federal gas tax, an initiative that hadn't gained much traction until this month. Suspending the tax requires Congressional action, but Biden's remarks on Monday mark the first time the administration has shown real willingness to push for the policy.

How do gas taxes work?

The federal gas tax is an excise tax imposed on producers, who are able to then cut fuel prices for consumers filling up their tanks at gas stations.

Since 1993, the fuel tax on regular gasoline has been locked at 18.4 cents per gallon and 24.4 cents per gallon for diesel fuel. These taxes are not adjusted for inflation relative to the rising material and labor costs associated with the federal transportation projects that they fund. More than 80% of the revenue received by the Highway Trust Fund comes from motor fuel taxes, which finance most federal government spending on highways and mass transit.

In addition to the federal gas tax, states impose a wide range of fuel excise taxes and other fees of their own, typically to support their own transportation funding needs above what the federal government provides for roads and infrastructure. In fact, the vast majority of highway and road expenditures come from state and local governments. Their fuel taxes combined usually are higher than the federal government's and hit consumers harder.

Since the federal gas tax is lower than most state gas taxes, the impact of a federal tax holiday would not be as noticeable to consumers as policies to suspend state gas taxes.

How much would a federal gas tax holiday help consumer prices?

The model attempts to take into account tricky questions about consumer demand for fuel, which remains relatively stable despite price changes. Producers may be less likely to pass a larger benefit of a tax holiday on to consumers if they are going to fuel up regardless of the price. This can vary from state to state based on the level of fuel dependency for the population's transportation needs.

If a federal gas tax holiday had been in effect from March through December, the PWBM estimated that per-capita gasoline spending in the United States would be lowered by roughly $47 during that timeframe. In a separate projection, which assumed only 41.2% of the tax decrease would benefit consumers, the model estimated per-capita gas savings of just $16 during the same period.

For those who drive more than the average consumer, a pause on the federal gas tax may generate more noticeable savings over the length of the holiday. Overall, compared to the bite it will take out of federal revenue, the impact may not be as great as intended.

"Consumers would benefit from the drop in gasoline prices, but the effects are small," Penn Wharton Budget Model researchers said.

Critics of the federal gas tax holiday legislation have argued that the policy has "no teeth" as currently written, Kiplinger reported last week.

"There's only a weak enforcement clause that permits the U.S. Treasury Department to 'use all applicable authorities to ensure that the benefit of the reduction in taxes … is received by consumers.' There are no specific fines or other penalties for failing to abide by the law," the business and personal finance forecaster noted.

U.S. Treasury Secretary Janet Yellen expressed support for the idea of a federal gas tax holiday during an appearance this weekend on ABC's "This Week."

“President Biden wants to do anything he possibly can to help consumers," Yellen said. “Gas prices have risen a great deal, and it’s clearly burdening households. So he stands ready to work with Congress, and that’s an idea that’s certainly worth considering."

The PWBM projection from April estimated that the impact of a federal gas tax holiday would be minimal at the consumer level, but sizable in terms of its aggregate impact on transportation funding.

A federal gas tax holiday modeled from March to December 2022 would reduce federal tax revenue by about $20 billion, a large chunk of the $138 billion balance in the Highway Trust Fund as of February. Since lower prices at the pump would increase consumption, however, state tax revenue would grow by between $100 and $300 million on average. This is one argument in favor of a federal gas tax holiday, since it could result in varying increases in revenue by stimulating some additional demand.

Critics of a federal gas tax holiday point to the long-term funding outlook of the Highway Trust Fund as a reason to be skeptical of the policy's overall benefit, particularly in the absence of wider reforms.

The Gas Prices Relief Act introduced by Sens. Hassan and Kelly calls for the Department of the Treasury to make general fund transfers to maintain the solvency of the Highway Trust Fund.

Do state gas tax holidays have a better chance of helping consumers?

The PWBM this month looked at three different state gas tax holidays that were implemented this year in Maryland, Georgia and Connecticut.

The PWBM found state gas tax holidays showed strong promise in reducing the consumer burden of fuel prices, in part because they are generally higher taxes.

"We find that the suspension of the state gasoline tax in Maryland reduced prices faced by consumers by 26 cents on average over the course of the gasoline tax holiday, which implies that 72% of the tax decrease passed on to consumers in the form of lower prices," the researchers said.

In Georgia, the PWBM found that the gas tax holiday reduced consumer prices between 16.85 and 18.77 cents on average in May — meaning between 58%-65% of the benefit went to consumers.

And in Connecticut, the PWBM estimated that 71% of the benefit of the state gas tax holiday went to consumers, though price reductions narrowed toward the end of the period the legislation was in effect.

More than 20 states are currently weighing a variety of proposals that would include suspending gas taxes to help consumers. In June, New York began a seven-month state gas tax holiday, suspending the 16 cents per gallon gas tax through the rest of 2022.

In Pennsylvania, Sen. Marty Flynn (D-Lackawanna) has a proposal that would lift the state's gas tax for the rest of 2022, relying on the state's federal relief funds to make up for revenue loss.

Gov. Tom Wolf has argued for a different approach, urging for the use of surplus federal funds to provide stimulus checks of up to $2,000 for Pennsylvania households with annual incomes below $80,000. Wolf supports a federal gas tax holiday.

Sen. Jake Corman (R-Bellefonte) also has proposed a partial gas tax holiday that lowers Pennsylvania's tax by a third through the rest of 2022. That would bring the state gas tax down from 58.7 cents per gallon to about 38 cents per gallon. Corman's proposal would use a combination of federal funds and a bond issue to make up for the revenue deficit.

In New Jersey, Democratic and Republican lawmakers have floated a number of gas tax holiday and rebate proposals for months without reaching a resolution.

In March, State Sen. Shirley Turner (D-Mercer) proposed lowering the state gas tax from 42.4 cents per gallon to 14.5 cents per gallon for 60 days. State Sen. Ed Durr (R-Gloucester) has consistently called for $500 rebates for New Jersey residents to address both high fuel costs and inflation, but the legislation has not found much support among Democratic colleagues.

A similar rebate proposal from Assemblyman Raj Mukherji (D-Hudson) calls for non-commercial vehicle owners in New Jersey to receive tax rebates between $400 and $800.

Members of the Biden administration are expected to meet this week with the CEOs of major oil companies to discuss rising fuel prices.

The president has become increasingly critical of leading oil producers, including Exxon and Chevron, for taking in record profits over the last year while failing to ramp up production — a lingering effect of the slowdown during the COVID-19 pandemic.

“I want an explanation for why they aren’t refining more oil,” Biden said.

To counteract the economic impact of higher fuel prices, the Biden administration already has released oil from the nation's strategic reserve and lifted restrictions on ethanol blends of gasoline during the summer months. These measures have not yet had a strong effect on prices.

"I understand that many factors contributed to the business decisions to reduce refinery capacity, which occurred before I took office," Biden wrote last week in a letter to the CEOs of the nation's largest oil companies. "But at a time of war, refinery profit margins well above normal being passed directly onto American families are not acceptable."