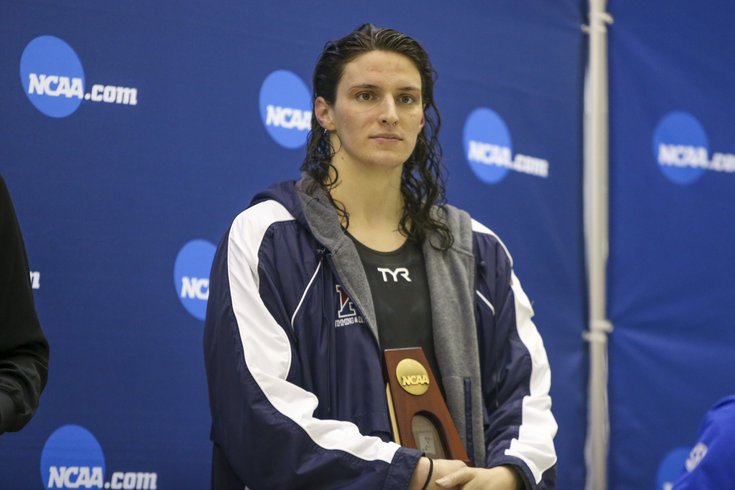 The world's governing body for swimming voted to effectively ban transgender athletes from participating in women's elite competitions on Sunday, shifting from a previous framework that determined eligibility based on the concentration of testosterone in blood.

FINA's new gender inclusion policy bars transgender women from competing if they transitioned after puberty, or began using testosterone-suppressing hormones prior to age 12. The organization asserts that post-pubescent transgender women have a "relative performance advantage" over women who were assigned female at birth.

The policy change also notes that cisgender women cannot feasibly bridge the gaps in perceived performance advantages through nutrition, exercise or the use of testosterone as a supplement, given that is it prohibited under the World Anti-Doping Code.

The change — which more than 70% of FINA's committee voted to approve — seeks to ensure "competitive fairness" among cisgender women.

In order for transgender women to qualify for women's swimming competitions, they would have to prove that they cannot or have not experienced male puberty. This can be shown through complete androgen insensitivity or the use of puberty-suppressants prior to age 12.

Those who are found to have more than 2.5 nanomoles per liter of testosterone in the blood may be retroactively disqualified or temporarily barred from competing.

The policy also includes the possible discussion of creating an "open" category for eligibility. This would enable transgender athletes who are ineligible to play in the women's category to still compete without having to participate in the men's class.

"We have to protect the rights of our athletes to compete, but we also have to protect competitive fairness at our events, especially the women's category at FINA competitions," said Husain Al-Musallam, president of FINA. "FINA will always welcome every athlete. The creation of an open category will mean that everybody has the opportunity to compete at an elite level."

FINA's policy change comes after months of deliberation among governments and sports organizations about transgender participation in sports. Much of the controversy surrounds Lia Thomas, a swimmer at the University of Pennsylvania who previously participated on the men's swim team prior to her transition, later joining the women's team.

Thomas' performance on the women's swim team has earned her several major accolades in recent months. Most notably, she was the first openly transgender athlete to win an NCAA Division I championship — she competed in the 500-yard women's freestyle — and put a spotlight on the issue of transphobia in collegiate sports.

"The new FINA release is deeply upsetting," Thomas told ESPN. "It is discriminatory and will only serve to harm all women."

Thomas has since become a major figure in the fight to allow transgender athletes to compete according to their gender identity. Still, she has also become a target of mostly-Republican lawmakers, using her achievements to boast legislation barring transgender women from competing in women's sports throughout Pennsylvania.

Earlier this year, USA Swimming — the national governing body for swimming — updated its policies on transgender participation. In it, the organization strengthened requirements for transgender women participating in women's swimming, primarily based on the concentration of testosterone in the blood.

The NCAA later updated its own policy that would focus transgender inclusion on a sport-by-sport basis, but later moved its implementation to this upcoming season after complaints that the policy change was directly targeting Thomas' participation.

Though FINA does not impact collegiate swimming, Thomas told "Good Morning America" in May that she intends to pursue the Olympic Games in 2024. According to this new policy, she would be unable to qualify based on her gender identity.

"It's very unfortunate that FINA has made this ruling," Joanna Harper, a medical physicist who has advised international sports federations and written extensively on gender in sports, told The New York Times. "Trans women are not taking over women's sports, and they are not going to."

It's unclear whether FINA's decision — which applies only to international and global swimming competitions — is going to impact national governing bodies to make similar decisions. However, experts on transgender issues warn that FINA's decision could have an impact on sports policies in the United States.

While the bulk of the policy change is based on transgender women participating in women's swimming, there are several added requirements for transgender men seeking to participate in elite competitions in the men's category. These include signing potential risk paperwork prior to participation in water polo or high diving, and submitting an exemption to continue using testosterone.