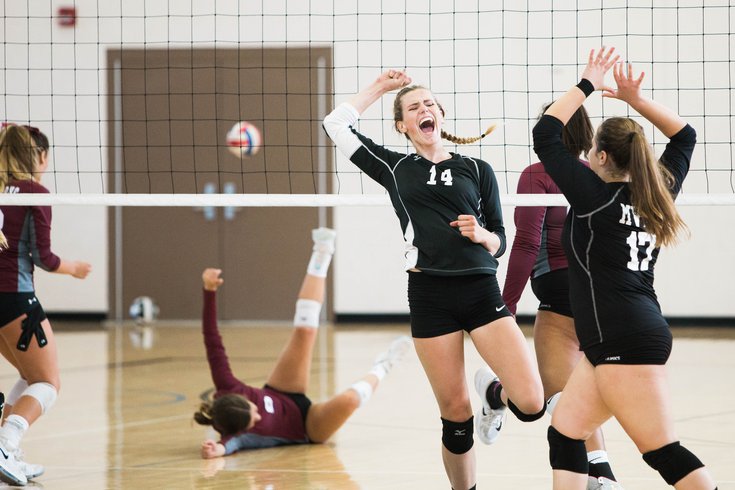 A Pennsylvania bill would bar transgender girls and women from joining sports teams at public schools and colleges. Above, a stock photo of a volleyball game.

Transgender girls and women would be barred from joining many female sports teams in Pennsylvania under a bill that passed the state House Education Committee on Tuesday.

The "Fairness in Women's Sports Act" would require public schools and colleges to designate their sports teams – including intramural and club teams – as male, female or coed based on biological sex. It would prohibit transgender girls and women from joining female sports teams.

The legislation was introduced in early 2021 by several Republican lawmakers, including Rep. Martina White, of Philadelphia. The committee vote came in the aftermath of University of Pennsylvania swimmer Lia Thomas becoming the first transgender athlete to win a Division I national championship.

The bill passed out of committee along party lines, with Republicans voting in favor 15-9. Gov. Tom Wolf, a Democrat, pledged to veto the legislation if it passes the General Assembly.

The legislation also would prevent local governments, accreditation programs and athletic organizations from hearing complaints or investigating schools that bar transgender women and girls from participating in female sports.

Students who believe they were deprived of an athletic opportunity because a team or school did not follow the law would be able to sue for "psychological, emotional and physical harm suffered." Schools and institutions also would be allowed to file lawsuits if they suffered harm as a result of a violation.

Wolf has stated multiple times during his two terms that he will not sign any legislation that promotes anything that he believes to be hateful. If passed, the "Fairness in Women's Sports Act" would be no different.

"Any legislation designed to deny opportunities is both disturbing and dangerous," said Rachel Kostelac, Wolf's deputy press secretary. "Transgender individuals should know that they belong, that they are valued, and that their participation in activities is welcomed."

"Having separate teams for men and women is the time-tested way to ensure everyone has the opportunity to showcase their talents and be champions," White said. "Just imagine how a young woman feels when missing out on a spot on team to a biological male. She loses more than just an opportunity. She loses potential friendships, competitive opportunities and life lessons gained through being part of a team."

Following the committee meeting, members of the House LGBTQ+ Caucus spoke in opposition of the bill, blasting it as part of a "nationwide effort to fuel a culture war over the existence of transgender people and to block their full participation in their own communities."

Rep. Brian Sims, a Democrat from Philadelphia and the co-chair of the LGBTQ+ Caucus, called the bill "another attempt to inflict harm on one of Pennsylvania's most vulnerable communities."

"This is a solution in search of a problem, and with the number of trans women and girls who play sports actually being extremely small, we must recognize this for what it is — an inflammatory move meant to spark a culture war, not a meaningful policy solution for an issue impacting working Pennsylvanians," Sims said.

The legislation has garnered support among Republicans in the state legislature, particularly following Thomas' swimming success this winter.

Her swimming success came amid hateful attacks from Penn students, including some of her teammates, as well as elected officials in Pennsylvania. In a Sports Illustrated profile, Thomas said that she is a woman and belongs on a women's team. She added that she wants other transgender people — particularly other athletes — to know that they are not alone.

The legislation is among numerous anti-transgender bills that have moved forward in state legislatures across the country in recent months. Two similar transgender sports bans were both vetoed by Republican governors last week.

On March 21, Indiana Gov. Eric Holcomb wrote a letter to the state's Republican House speaker to explain why he decided to veto the state's ban on transgender athletes in K-12 schools. He said there was no proof to support the implication of the bill – that there was an increasing problem that required government intervention.

The next day, Utah Gov. Spencer Cox wrote a letter to the state legislature's GOP leadership, saying he voted the ban on transgender girls playing sports correlating to their gender identify because there were so few transgender athletes playing sports in the state. He wrote that "of the 75,000 high school students who participate in sports in Utah, only four are transgender."

Cox went on to question why "so much fear and anger" has been directed at such a small population of people.

Pennsylvania's legislation was introduced in April 2021. In a co-sponsorship memo, state Rep. Barb Gleim, a Republican who represents Carlisle, Cumberland County, referenced the 1972 passage of Title IX, which protects against sex-based discrimination in any educational setting receiving federal funding.

She added that lawmakers introduced the legislation to "protect opportunities for women and girls in athletics" by making sure that they are not playing alongside "biological males playing on women's sports teams."

Gleim's memo also referenced a 1996 Supreme Court ruling in United States v. Virginia, in which former Justice Ruth Bader Ginsburg wrote that "inherent differences" among men and women "remain cause for celebration, but not for denigration of the members of either sex or for artificial constraints on an individual's opportunity."

That ruling found that a Virginia college's all-male admissions policy was unconstitutional as it failed to show "persuasive justification" for denying entry for female applicants.