The senior, whose achievements have led to a fairness debate regarding transgender athletes, won three individual events 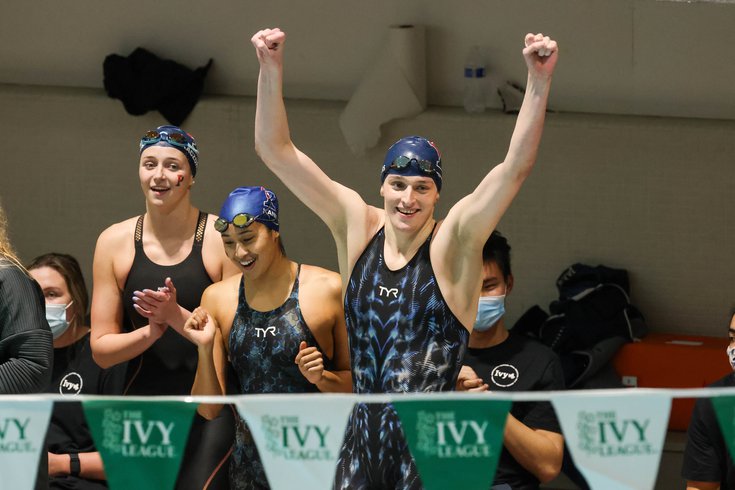 Lia Thomas was the highest-scoring swimmer at the 2022 Ivy League Championships after winning three individual events and breaking six records during the meet.

The University of Pennsylvania swimmer was the meet's highest-scoring swimmer, setting the stage for next month's NCAA championships, where she is favored to win the 200- and 500-yard freestyles.

Her performance came as she remained at the forefront of a debate on the fairness of transgender women competing in women's sports. Three of the records Thomas broke belonged to Miki Dahlke, a Harvard University alum who signed a letter supporting Thomas's inclusion earlier this month.

"I signed the letter because I believe Lia should have the same opportunity to compete in a sport she loves just like any other woman in the NCAA," Dahlke told ESPN. "I think it's important to create a safe space for all athletes in sport."

Thomas's first victory came in the 500-yard freestyle, which she swam in a pool-record 4:37.32. It was the eighth time a Penn swimmer has won the event at the Ivy League championships.

Thomas, 22, followed that by setting meet and pool records in the 200-yard freestyle with a time of 1:43.12. It was the sixth time a Penn swimmer has won the event.

Lia Thomas is the @IvyLeague Champion in the 200 free with a meet and pool record time of 1:43.12.#FightOnPenn 🔴🔵 pic.twitter.com/rNxanYF9bs

She capped her individual races by winning the 100-yard freestyle in 47.63 seconds, setting meet, pool and Penn records.

Lia Thomas is the @IvyLeague Champion in the 100 free with a meet, pool and program record time of 47.63.#FightOnPenn pic.twitter.com/1Ipo1U7LVO

Thomas also was part of Penn's winning 400-yard freestyle relay, which set pool and Penn records by completing the race in 3:17.80. It marked the first time Penn had ever won a relay at the championships.

Thomas was a member of Penn's 800- and 200-yard freestyle relay teams, as well as the school's 400-yard medley relay team. Those teams placed third, fourth and fourth, respectively.

Harvard University was the overall winner of the meet, held at Blodgett Pool in Cambridge, Mass. Penn finished third behind second-place Yale.

Earlier this month, the NCAA said it would not fully adopt USA Swimming's new rules on transgender athletes until the 2023-24 season, paving the way for Thomas to compete at the NCAA championships in Atlanta on March 16-19.

That ended several weeks of uncertainty about her eligibility to compete there.

In January, the NCAA had changed its policy on transgender athletes, allowing each sport's governing body to set its own rules. The NCAA's previous rule, which took effect in 2010, allowed transgender women to participate if they had undergone at least one year of testosterone suppression treatment.

USA Swimming, the national governing body for competitive swimming, then changed its policy to include additional requirements for swimmers who transition from male to female.

The concentration of testosterone in a transgender woman's blood must be less than five nanomoles per liter continuously for at least three years before she can compete. Additionally, a panel of three independent medical experts must determine whether a swimmer's prior development as a man gives her an advantage over her cisgender competitors.

The new rules could have prevented Thomas from competing in the NCAA championships, because she began hormone suppression therapy in May 2019. But she was in compliance with the NCAA's previous policy.

However, the NCAA is rolling out its new transgender policy in multiple phases.

The first phase affects championships held this winter and spring. To qualify, transgender swimmers must be in compliance with the 2010 policy and provide evidence of a one-time serum testosterone level below the maximum limit within four weeks of the event.

The second phase, which will be rolled out next season, will require swimmers to submit their testosterone levels at the beginning of the year and six months after. The third phase will incorporate the USA Swimming policy in the 2023-24 campaign.

Thomas spent three seasons on Penn's men's swimming team before completing her transition in 2020 and joining the women's squad this year. The Ivy League canceled its 2020-21 season due to the COVID-19 pandemic, postponing Thomas's final year of eligibility.

Thomas has said she realized she was transgender during the 2018 summer, but did not begin her transition until the following spring. She competed on the men's team during her junior year after having already started hormone suppression therapy.

Thomas' strong performances against her competition have sparked a national debate over transgender athletes and caused division among her own teammates.

A group from her team wrote in an anonymous letter stating Thomas has "an unfair advantage" over the competition and asked Penn not to challenge the NCAA's new policy on transgender athletes. Another set of teammates released an unsigned letter in "full support" of Thomas.

Penn has committed to supporting Thomas through the NCAA rule changes.