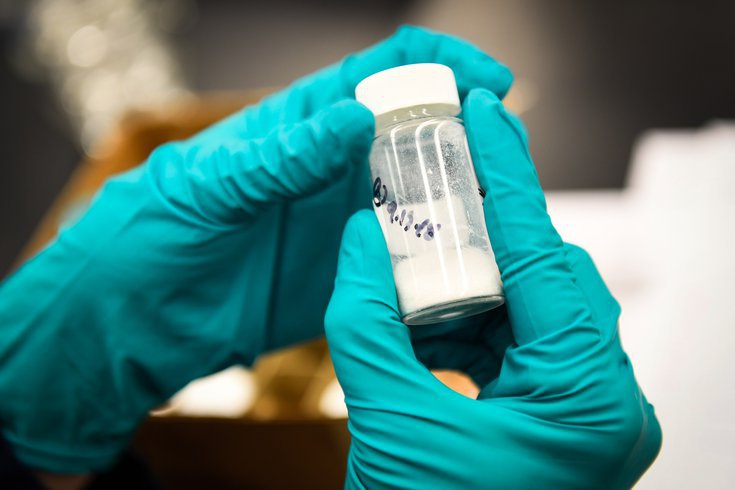 The Pennsylvania Attorney General's office reported a dramatic increase in the proportion of fentanyl seized in the state during the first three months of 2022. A significant share of these drug seizures include counterfeit prescription pills laced with the deadly synthetic opioid. In the photo above, a DEA chemist holds a vial containing a fentanyl sample.

More fentanyl was seized in Pennsylvania during the first three months of 2022 than during the entirety of last year, according to a new report from the state attorney general's office. The findings indicate an accelerated shift away from heroin in favor of the cheaper, deadlier synthetic opioid that has now become dominant in the state's drug supply.

For years, the opioid epidemic has been understood primarily in terms of heroin and prescription pills. The rise of fentanyl and other synthetic opioids, which are cheaply produced and often laced into counterfeit pills, has contributed to stark increases in reported overdoses and overdose deaths in Pennsylvania and across the country.

In 2020, overdose deaths in Pennsylvania increased by 16.4% from the previous year and rose another 6% last year to 5,438. Every day, an average of 15 Pennsylvania residents have died from an opioid overdose over the last year.

In Philadelphia, the DEA and PPD each have reported indications of a growing fentanyl supply in the city and a trend away from heroin in the past seven years. Submissions of seized drug samples received by PPD's Office of Forensic Science found a growing share of fentanyl from 2015-2021.

The increasing presence of fentanyl in pill form, often disguised to look like prescription drugs, now represents a growing share of seizures in Philadelphia.

Last year, the Philadelphia Department of Public Health warned that "fentanyl is in everything," citing sharp rises in overdose deaths from laced methamphetamine and PCP.

"Its presence in non-opioid drugs and counterfeit pills is especially concerning as individuals who prefer these drugs may have had little exposure to such a potent opioid and may be at an even greater risk for overdose," said Dr. Kendra Viner, director of the health department's Substance Use Prevention and Harm Reduction division.

The attorney general's report also noted the increasing presence of Xylazine, a veterinary tranquilizer used as a cutting agent for heroin and fentanyl, showing up in samples of seized drugs.

"The public must understand that the risk of inadvertent overdose is far higher with fentanyl than heroin and that with the prevalence of this powerful, and easy to conceal, synthetic drug, that risk is everywhere but is especially prevalent in counterfeit pills," the attorney general's report concluded. "Moving forward, efforts to combat Pennsylvania's heroin and opioid overdose epidemic must incorporate and respond to this new development."