Dayron Burney-Thorne, 16, is one of six suspects wanted in the Sept. 27 ambush that killed Nicholas Elizalde, 14, after football practice 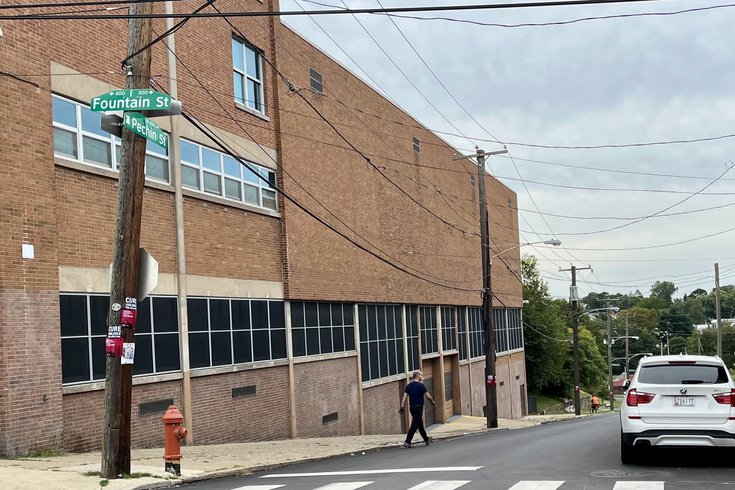 Philadelphia police released video and photos of three suspects in the Sept. 27 shootings outside Roxborough High School that killed Nicholas Elizalde and injured four others. This photo shows the back of school, along the 4700 block of Pechin Street, near where the shootings happened.

Philadelphia police released video and images of three more people wanted in connection with the Roxborough High School shootings on Wednesday, as the investigations continue to zero-in on potential suspects.

Video shared by police on Wednesday shows three masked males, each dressed in black, who were recorded by cameras at a gas station and a convenience store. They are believed to be among the five shooters who opened fire at Roxborough football players leaving the school's stadium and walking back to the high school after a scrimmage on Sept. 27.

The latest information from police comes after authorities issued an arrest warrant on Tuesday for 16-year-old Dayron Burney-Thorne, who is wanted on charges of murder, criminal conspiracy and related offenses.

Police did not identify the three suspects shown in the surveillance video released on Wednesday.

The Sept. 27 shootings happened along the 4700 block of Pechin Street, which runs between the back of the high school and the football field.

At around 4:40 p.m., five gunmen emerged from a Ford Explorer parked on Pechin Street and fired more than 60 shots at the football players. The SUV had been parked for six minutes in the run-up to the shooting, leading investigators to believe that the ambush was carefully planned, said Capt. Jason Smith, of the Philadelphia Police Department's Homicide Unit.

Nicholas Elizalde, 14, was killed by the gunfire, and police have said he was an innocent victim. Elizalde was a freshman at nearby Walter B. Saul High School, who played on Roxborough's junior varsity football team because Saul doesn't have a team of its own. Prior to this year, he had attended school in Havertown, Delaware County, but he had been accepted into the city's agricultural high school and his mother said they had intended to move to the city later this year.

Four other teens were injured in the shooting; three of them were Elizalde's teammates on the football team. The other boy is a 17-year-old who police believe was the target of the shooting. He is not a Roxborough High School student, police said.

After the barrage of gunfire, four of the five gunmen got back in the SUV, which sped away from the scene. The fifth gunman continued to pursue the 17-year-old, but ran out of bullets and fled on foot, police said, and a sixth suspect, the getaway driver, remained in the car during the shootings.

The Ford Explorer, which had a temporary license plate from Delaware, has been determined to have been stolen. It was found at a Southwest Philly parking lot the night after the shooting. A second vehicle, a Chevrolet Impala that police suspect was used to help transport the gunmen, also was recovered. It was found in North Philadelphia, police said.

Smith said Tuesday that the investigation is focused on a group of eight people, and among those, six were involved in the shooting. Police Commissioner Danielle Outlaw has urged the suspects to turn themselves, indicating that homicide detectives have identified them.

"We know who you are, we will find you, and we will take you into custody," Outlaw said.

The reward for information leading to arrests and convictions is up to $45,000. Anyone with information about the shooting can contact Philadelphia police by calling or texting (215) 686-8477. Tips also can be submitted anonymously online.