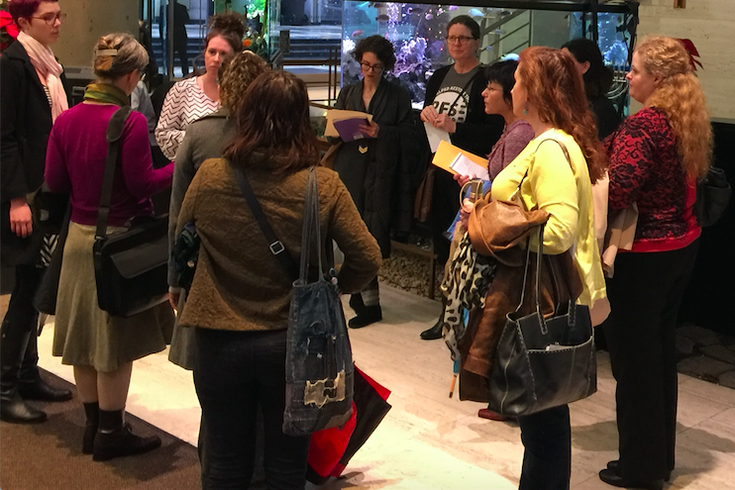 The 'Tuesdays with Toomey' crew meets up with Kate Schramm of U.S. Sen. Pat Toomey's Center City office (third from left) to let her (and, when it's passed along, him) know the issues they have with his silence regarding President-Elect Donald Trump's incoming administration.

They call their weekly effort “Tuesdays with Toomey.”

On this Tuesday, the group of 11 women – the crowd size varies from week to week – arrived at U.S. Senator Pat Toomey’s Center City office eager to have their voices heard.

They wanted to discuss issues related to the election, and what they’ve perceived to be their senator’s unwillingness to push back on matters that they consider non-partisan.

Their grievances date back to Toomey’s unwillingness to publicly state that he’d vote for Donald Trump, which he ultimately did an hour before polls closed.

Their urgency has intensified in the weeks since.

“Everybody has letters about their individual concerns,” explained organizer Angela York Crane as the group, spurred on by the private Pantsuit Nation Philadelphia page on Facebook, assembled outside in the rain. “Senator Toomey promised not to be a rubber stamp for the president-elect’s administration, but he’s been silent to the point that he has been a rubber stamp.”

Since they'd called ahead, and learned that a conference room wouldn’t be available for the exchange, the group was met by Kate Schramm, regional manager for Toomey's Southeast Pennsylvania office, in the lobby of 1628 JFK Boulevard.

Schramm dutifully – and receptively – took notes and accepted letters and other literature from group members, but couldn’t speak on behalf of her boss. The notes covered Trump’s appointments and conflicts of interest inherent to merging his new job with his business life.

“My (six-year-old) daughter never had to see a swastika painted on a building before this election.” – Caroline Tiger

Their exchanges, as they went around in a circle speaking, were as cordial as could be imagined under the circumstances, even when the talk turned to the “shameful, disgraceful, totally un-American” rhetoric surrounding a Muslim registry.

One woman talked about how her daughter – gay and Arab – “feels more comfortable living in Georgia than central Pennsylvania” thanks to the rhetoric and potential rollbacks of laws that protected her lifestyle and lineage.

Audra Wolfe, a historian who said she’s working on a book about the use of propaganda during the Cold War, said she’s concerned about things she’s seen from the Trump soon-to-be administration that runs counter to American values.

That includes incessant attacks on the free press, Trump allowing his daughter to sit in on a meeting with foreign dignitaries and “moderate Republicans doing nothing to stand up” and counter questionable moves.

Another spoke about the fearful nature of a president-elect who seemingly gets some of his news from a news-website (InfoWars) that maintained “9/11 was an inside job.”

“My daughter never had to see a swastika painted on a building before this election,” said Caroline Tiger of her six-year-old. “We need him to stand up against hatred and bigotry.”

Crane said the effort was all about letting Toomey know the group, and others, don’t think he should stand silently by as Trump “appoints a cabinet, and advisers, who are in no way representative of his constituency.”

“The campaign rhetoric has escalated to the point that people are feeling free to be bigoted against others,” she said. “We expect Senator Toomey to give us a voice.”

“This is just the tip of the iceberg.” – Sarah Roberts of West Philadelphia.

For her part, Rosalind Holtzman of Elkins Park said she had about “eight billion things” with which she could take issue with Toomey. She’s Jewish and married to a Mexican-American, which helps explain why she “feels like we’re in the crosshairs.”

Foremost among them was "Toomey not taking an unequivocal stand against hatred, bigotry and divisiveness that was incited by the campaign.”

She called on him to denounce the Bannon appointment, and included a Bible verse, in her correspondence. (It was Leviticus 19:16 which, in part, reads, "Do not do anything that endangers your neighbor's life.")

As the half hour meeting was coming to an end, the women spoke about how they’d return next Tuesday and subsequent Tuesdays until they feel as if they’ve been heard, and applicable action was taken by the senator.

“This,” said Sarah Roberts of West Philadelphia, “is just the tip of the iceberg.”

The women's notes and comments will be sent to the Washington D.C. office for compilation. An email to Toomey spokeswoman Melissa Ferdinand to gauge a tally of similar correspondences made to the senator’s offices was not immediately returned on Tuesday afternoon.