The dark comedy will premiere in select theaters Dec. 10 and on Netflix Dec. 24 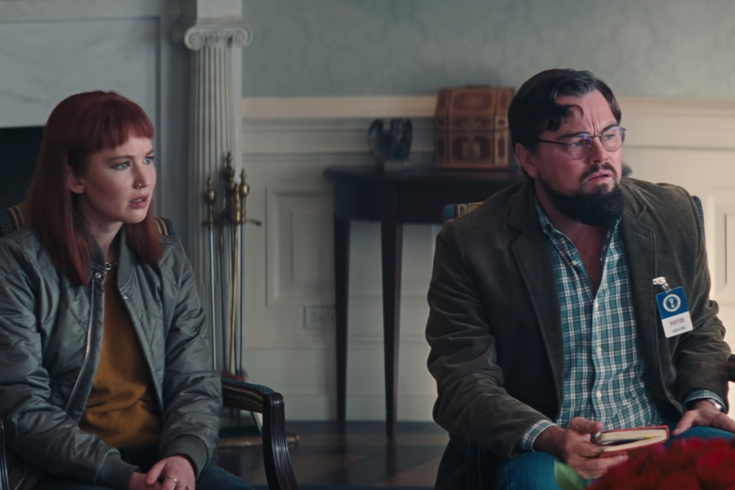 Adam McKay's 'Don't Look Up' stars Academy Award winners Leonardo DiCaprio and Jennifer Lawrence as a pair of low-level astronomers who must warn mankind about a planet-destroying comet heading straight for Earth.

Adam McKay is back with a new satirical film, and this time, the Philly native is making fun of an event that hasn't happened — yet.

McKay's latest project is called "Don't Look Up," a dark comedy film that mocks how the world could possibly end someday and the hurdles a group of scientists must overcome to convince a society unconcerned by the looming threat.

"Don't Look Up" features a star-studded ensemble cast that is headlined by Academy Award winners Leonardo DiCaprio and Jennifer Lawrence. DiCaprio and Lawrence play a pair of low-level astronomers who must go on a media tour to warn humans that a comet the size of Mount Everest will hit Earth within six months and destroy the planet. Except, the only problem is, nobody seems too worried about the apocalyptic threat.

Those who watch the film's trailer may find it similar stylistically to some of McKay's other projects like "The Big Short" and "Vice," in which he uses humor to analyze nonfiction events and characters.

McKay, 53, said in an interview with Netflix that he turned to classic comedy films like "Office Space" and "Network" for inspiration on his latest project.

"I knew the movie needed to be laugh-out-loud funny, not just clever or wry, so I turned to the all-time greats," McKay said. "Comedies like 'Office Space' and 'Idiocracy' that really capture the weird way we live in the modern world. But also movies like 'Dr. Strangelove,' 'Network' and 'Wag the Dog.' I've always been intrigued with the idea of finding a way to encapsulate these giant looming threats that we’re faced with in this world, but to show it in a way that has a bit of fun with it."

McKay is hopeful that his new film will give people an opportunity to detach themselves from the real world for a bit.

"In making this movie, there was this sense of everyone collectively exhaling in relief that we could finally laugh after the insanity of the last two years," McKay said. "And that’s not to say that laughter is the only way to deal with confusing or scary times, but I think this movie is really for all the people out there who have been living in this crazy ecosystem and just want to laugh at that and maybe have a couple of basic problems solved."

"Don't Look Up" will premiere in select theaters Dec. 10 and on Netflix Dec. 24.

McKay grew up in both Philly and Malvern, Chester County, where he attended Great Valley High School and Temple University. McKay said that it was in Philly where his love for movies began.

McKay served as the head writer at "Saturday Night Live" before moving on to write and direct hit Will Ferrell-led comedy films like the two "Anchorman" movies, "Talladega Nights: The Ballad of Ricky Bobby" and "Step Brothers."

In recent years, McKay has transitioned to more dramatic projects such as the aforementioned "The Big Short" and "Vice," as well as "Succession."

"The Big Short" earned McKay the Academy Award for best adapted screenplay in 2016. McKay then received three Oscar nominations in 2019 for "Vice." The hit HBO show "Succession" was awarded outstanding drama series at the 2020 Emmy Awards.