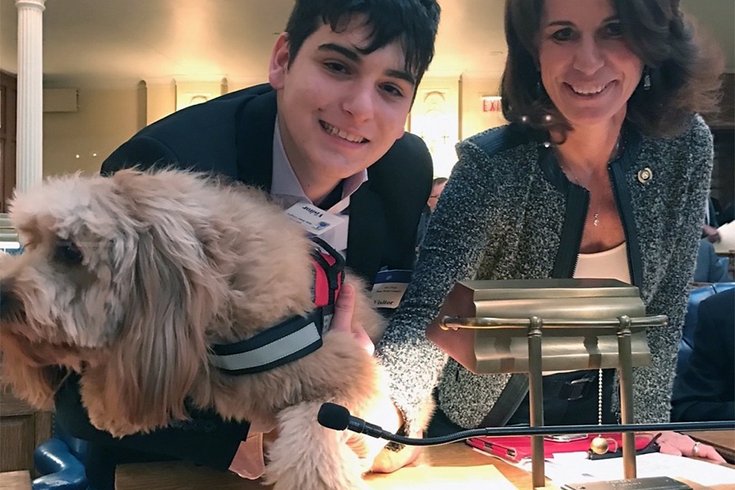 Cherry Hill East High School student Ben Shore, his service dog, Charlie, and Assemblywoman Pamela Lampitt cast a vote for Charlie's Law on January 24 in statehouse in Trenton. If approved by the New Jersey Senate and the governor, the law would impose penalties for interfering with the access of service dogs.

Ben Shore, a 16-year-old junior at Cherry Hill East High School, is going to school Thursday – and taking his service dog, Charlie, with him.

The school posted a notice Wednesday on its website alerting students and parents, and offering advice on how to properly interact with a service animal.

But the notice makes no mention of the months of wrangling it took for Shore to gain approval to bring his dog to school.

"I was surprised, but I think this is a good thing. It is confusing to me that they changed now," Shore said.

He credited coverage by PhillyVoice.com and other media for forcing the school to make the change.

"I think the school had no intention of changing. The media is an extremely important key for public education and for helping to gain public support," said Shore, who was home sick on Wednesday.

The district did not immediately respond to a request for an explanation of the change.

The student's father, Eric A. Shore, a lawyer, believes the district "had an opportunity to look at the Americans with Disabilities Act and state policy" on service dog access and finally realized the district's policy was wrong. "I think it was just ignorance."

Shore, who is on the autism spectrum and has issues caused by ADHD and anxiety, has had Charlie, a golden retriever and poodle cross, for about 18 months to help him cope with his multiple disabilities. They have never been allowed to attend school together.

In June 2016, the school district adopted a restrictive policy, including an outright ban of all service dogs from school buses. The total bus ban appears to violate federal and state protections for service dogs.

The district, which is working on revision of it policy, has declined to speak to PhillyVoice about its current proposal or its plans for change.

Shore, who challenged school officials at meetings and on social media, and was repeatedly told he should not bring the dog to school, decided Monday was the day to go to school with his dog for the first time.

He did so a week after the New Jersey Assembly voted to put civil penalties in place for those who interfere with service dogs. Charlie's paw was used to record the vote of a sponsoring assemblywoman.

But the state Senate and the governor must approve the legislation before it becomes law.

At least one other student in the district has a service dog.

His mother, Debbie Martin, who had sought to have her child attend school with his service dog, but she said school officials put her off. She had contacted a school official again about the issue on Tuesday, she said.

"I don't know what this means for my child who has epilepsy and autism," she said, noting the district has not reached out to her since telling Shore he could come to school with his dog.

"I hope this means he will be able to attend with his dog, which will keep him in district schools and help him to navigate his day," she added.

"Ben has been the biggest advocate for himself. I try and stay out of this. This is his battle. But I am very proud of him sticking to his guns and doing the research. I think the district made a mistake. But there is a bigger issue here; it is not just my son," who needs a service dog, said the elder Shore.

The mother of a child with severe dog allergies has raised concerns about service dogs, though that student does not attend the Cherry Hill East school.

"We're happy that Ben is able to bring his dog to school," said Ashley Misinkavitch. "I have requested but not yet received a copy of the new policy.

"But one disability should not be pushed aside for the needs of another. Ever. And we never asked for Parker's disability to push aside anyone else's. Period. What we asked for was consideration... there are disabilities that conflict.

"A compromise needed to be made and I'm hoping that compromises are outlined and beneficial to all parties," she concluded.