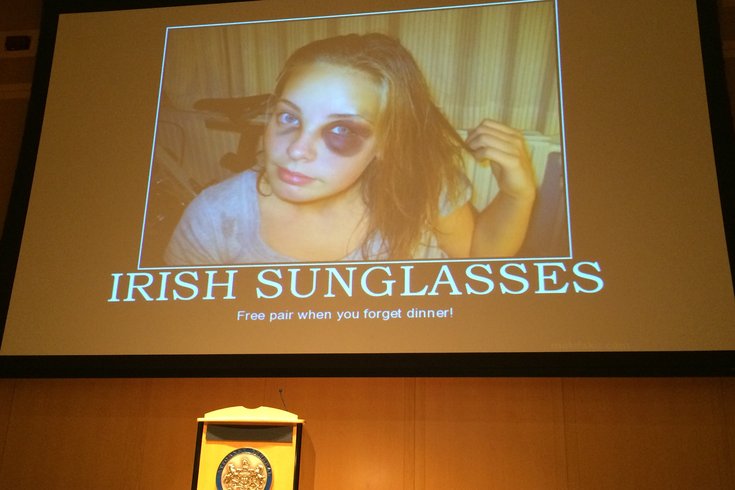 An example of one of the images that was supposedly shared by government employees through email.

Embattled Pennsylvania State Attorney General Kathleen Kane on Tuesday named a former Maryland attorney general to head up her office's investigation into what many are calling "Porngate" – an investigation into objectionable and questionable content in emails said to have been shared by state employees, including judges and state prosecutors, on government owned computers.

Kane named Douglas F. Gansler, who served as Maryland attorney general from 2006 to 2014, and a small group of lawyers as a team to lead an independent investigation into the emails allegedly shared by government employees. The announcement was made during a news conference held at the National Constitution Center in Center City Philadelphia.

The event was preceded by a slideshow presentation of a sample of some of the emails at issue, some of which included racist statements such as showing African American teens in prom photos with captions saying: "There's a Buick with missing seat covers somewhere in the 'hood."

One photo showed a woman with a black eye, with a caption that read "Irish sunglasses: Free pair when you forget dinner!"

Another photo shown was of a white man holding a bucket of fried chicken while surrounded by African Americas. The caption read "bravery." 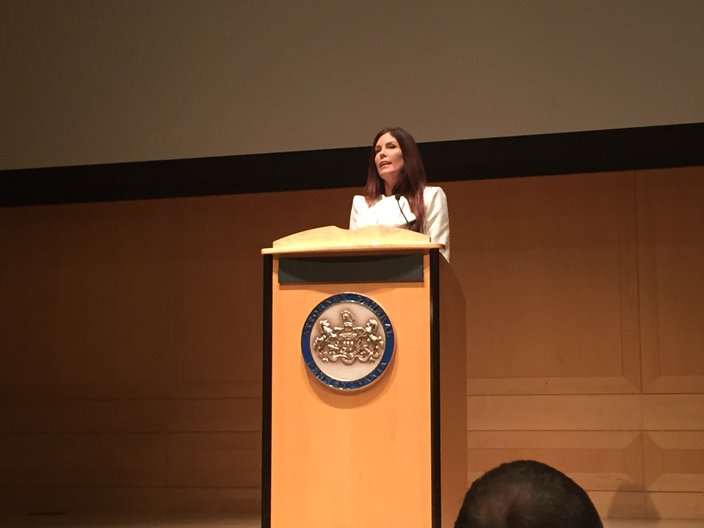 PA Attorney General Kathleen Kane announces the appointment of former Maryland Attorney General Douglas Gansler to head a team investigating improper emails allegedly shared by state employees. (Hayden Mitman / PhillyVoice)
"This behavior violates the constitution of Pennsylvania," said Kane. "We've reached a point in Pennsylvania where some government leaders have lost their sense of dignity, of duty and of stability. We've stopped progressing as a society, but have regressed to the 1950s and the 1960s."

But Kane's office has not publicly released all of the emails in question and just what the extent of the potential crimes – if any have been committed – is yet unknown.

Still, during the press conference, Kane suggested that the emails may have been shared by individuals who were racist white males and "women haters."

"No African American should walk into a courtroom where the judge or prosecutor or defense attorney mocks and ridicules him or her behind a closed network because of the color of their skin," said Kane. "No woman should go to work and be subjected to consistent treatment of disgusting indignity from women haters."

Gansler said neither he, nor any of his team, have yet viewed any of the potentially offensive emails and he said he couldn't speculate on just what crimes may have been committed through the email exchanges.

"We just don't know what's in those emails," he said.

Gansler said he doesn't believe his team is on a wild goose chase, and will be looking for any violations to criminal or civil laws as well as any possible issues of ethics violations.

The team will have the power to have individuals arrested if laws are found to have been violated, he said.

"This is far more than a fishing expedition," said Gansler.