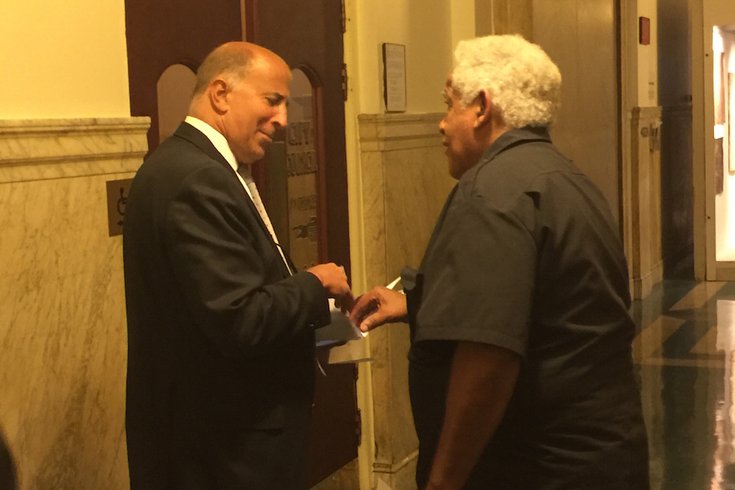 A Porngate campaign championed by one T. Milton Street Sr. made its way into the world of Philadelphia City Council on Thursday as several councilwomen supported a push asking District Attorney Seth Williams to fire three employees for their roles in the scandal.

Williams had previously assigned the trio to sensitivity training when word of the scandal broke.

“A culture of misogyny and racism that permeates the highest levels of government is evidence of gross misconduct,” read the resolution they planned to introduce on Thursday. “We stand together to urge [Williams] to respond to this matter with the utmost urgency.”

"They determine what cases will be prosecuted, who stands trial and they really determine the fate of people’s lives. In my opinion, they cannot stand on behalf of women and people of color based on accepting, receiving and, in some cases, sending these emails." – City Councilwoman Cindy Bass

Around the same time, Street was across the hallway in Council Chambers distributing dozens of four-page informational packets that included a letter he had written to Williams, an announcement of a yet-to-be-scheduled press conference and two raunchy pictures found during the Porngate investigation.

Seeing a groundswell of activity behind him – Bass said the council move wasn’t related to Street’s work, though she appreciates anyone supporting that mission – the former state senator and mayoral candidate said he plans to ramp up his efforts, and in a rather aggressive fashion.

“We are going to hand these out to Seth’s neighbors, all around his community, outside his church. This has to be corrected. We are not going away. This will blow the community’s mind,” Street said moments before handing a copy to City Councilman Mark Squilla. “When the press writes about this, it’s not the same as people seeing it. When they see it, they'll take action.”

Street said he’s worried that the council resolution can only do so much, which is why he’s trying to galvanize community outcry over an issue that’s seen two highly anticipated press conferences postponed due to inclement weather.

“The only way Seth is going to do anything is if his career’s threatened,” Street said.

Bass took a much more measured tone when discussing the impetus behind the resolution.

“We are very much upset and displeased with the way this matter is being handled,” she said. “These are people who should be held to a higher standard because they stand in judgment of others. This is what they do day-in and day-out. They determine what cases will be prosecuted, who stands trial and they really determine the fate of people’s lives. In my opinion, they cannot stand on behalf of women and people of color based on accepting, receiving and, in some cases, sending these emails.

“We really just can’t have it. It diminishes the public’s respect, support and confidence in the District Attorney’s Office if you have these guys on the payroll.”

Williams issued a statement in regard to the press conference, as well.

"While I appreciate and understand the concerns of the city councilwomen and NOW over the content of the emails, I have reviewed this matter and the individuals involved have been disciplined," it read. "Additionally, I have reached out to NOW on multiple occasions to sit down and discuss this matter in greater detail and to date, they have refused.

"I agree that the material in question was offensive, but I would remind everyone involved that this behavior never took place in the Philadelphia District Attorney's Office. My office has remained fully committed to doing the important work of making Philadelphia streets safer every day." 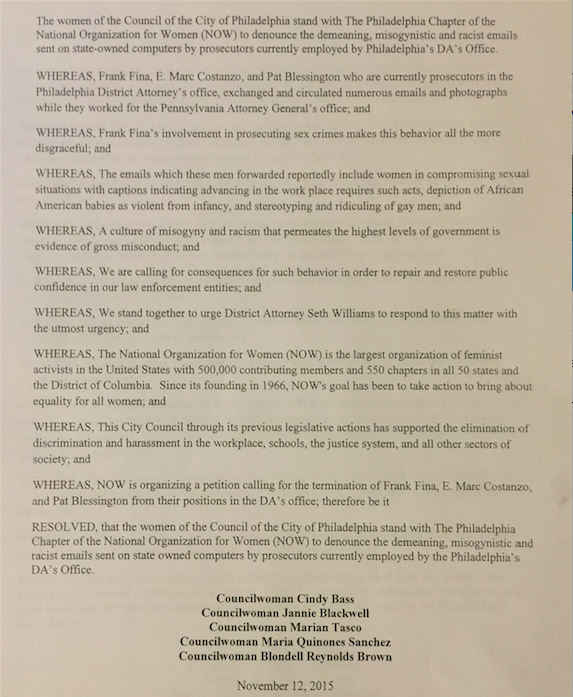