The staffers will get to keep their jobs, District Attorney Seth Williams said 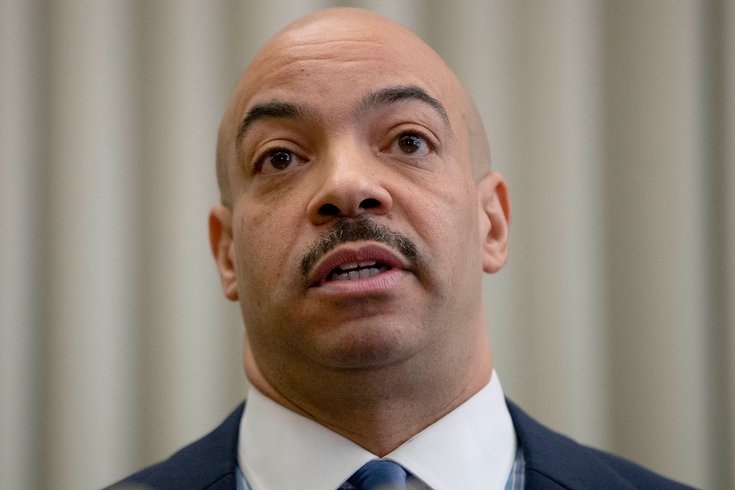 The sexually explicit and racially insensitive e-mails, unearthed shortly after state Attorney General Kathleen Kane took office, surfaced during her investigation of the handling of the case against Jerry Sandusky. They were released last Wednesday at the urging of Kane, who claims that they were the motivation for the perjury, conspiracy and other criminal charges filed against her.

The documents implicate the three staffers in Williams' office – Frank Fina, Marc Costanzo and Pat Blessington – as participants in the circulation of the e-mails during their time working in the state Attorney General's office. Williams, after reviewing the documents and contacting former colleagues, decided not to discipline the employees, instead ordering them to undergo sensitivity training.

Kane, charged with unlawfully leaking secret grand jury information, is alleged to have acted in retaliation against Fina, whom she claims leaked information to the Philadelphia Inquirer to reveal that she had secretly shut down an undercover bribery investigation in Philadelphia.

In his statement, Williams says that his review determined "none of the e-mails in question were created or originated by these three employees, and none were circulated to or by them while employed in my office."

The full statement from Williams is republished below:

"I’ve looked at the e-mails released, and yes, like everyone else, I could see immediately that they are offensive. They contain numerous graphic images with captions that are derogatory towards women, a few that have racist connotations, and a smaller number with negative comments about gays. As the father of three daughters, as an African-American, as a law enforcement official, I was disappointed, and angry, that these messages were considered acceptable.

"As I began my review, I found that many people I talked to in the community over the last few weeks didn’t know all the facts – they assumed from press reports that hundreds of e-mails were released, and that they were generated by a small group of employees here in my office.

"I take my responsibilities in this situation with gravity. The easiest reaction would have been just to fire anyone named in the press, without any inquiry. Instead I assembled my senior staff, consisting of blacks and whites, women and men, and we carried out a thorough process to make sure I got all the information necessary to make serious decisions.

"In choosing what, if any, action to take, I considered my obligations. The first is to my conscience – to make the best decision possible. The second is to the citizens of Philadelphia – they deserve wise, well-reasoned actions by their elected officials, especially the chief law enforcement officer. The third is to the very hard-working women and men who seek justice every day as my colleagues in the District Attorney’s Office. Finally, I have an obligation to the subject individuals – to fair and individualized treatment.

"My process had several elements. The three employees in question – Pat Blessington, Marc Costanzo, and Frank Fina – were individually interviewed by a panel. We also questioned people they worked for, people they worked with, and people who worked for them, both in the District Attorney’s Office and in the Attorney General’s Office. We reviewed all e-mail communications still available from their time in my employment. We looked at the work of the Philadelphia investigating grand jury assigned to the “sting” case, which reviewed internal documents from the current attorney general’s office relating to charges of racism, and which heard testimony from employees of the current attorney general. I personally contacted and spoke with prosecutors and other elected officials around the country, with Fortune 500 executives, and with leaders of non-profits and community groups.

    "We found that none of the e-mails in question were created or originated by these three employees, and none were circulated to or by them while employed in my office. The large majority of the released e-mails – there are 20 altogether – date from five to six years ago. They were part of address chains covering literally hundreds of employees in the Pennsylvania Attorney General’s Office, who received and radiated the same images in widening circles.

"None of those hundreds of employees – who were colleagues of the three prosecutors now working in my office – were ever disciplined for improper e-mail activity during the years in question, either by the previous or by the present attorney general. At least one AG employee, who served as a central hub for the e-mail distributions and who continued those activities even after the current AG took office, has actually been promoted and given a substantial raise.

"We found no evidence or suggestion of any inappropriate e-mail behavior by these three employees during their time to date in my office, but if we did I would certainly terminate them.

"We found that the derogatory elements appearing in the attorney general e-mail chains were not reflected in the work relationships of the three specific employees who have been the focus of the attorney general’s filings. On the contrary, the employers, employees, and colleagues with whom we spoke – and who included both women and blacks – described these employees as hard- working, dedicated prosecutors who were never disrespectful to them as females or minorities.

"We reviewed the findings of the Philadelphia grand jury investigating the “sting” case. Before deciding whether charges were appropriate, the grand jurors, who represent the diversity of Philadelphia’s citizens, examined public claims that the original “sting” investigation was the product of racism on the part of the prosecutors now employed in my office. The grand jurors had access to internal documents generated under the current attorney general, and heard sworn testimony from many of the individuals who were involved in the original investigation. The grand jurors concluded that allegations of racism against these prosecutors “were simply false.”

"Finally, I have spoken to the employees in question myself, face to face. I believe they have regret and remorse for the conduct of which they were a part. They recognize that the e-mail chains in which they participated were demeaning, unprofessional, and wrong.

"Under all the circumstances, I have chosen awareness and education over termination and am directing these employees to attend sensitivity training. Insensitivity often has its genesis in unfamiliarity. That’s why diversity is so important. I have worked to make sure that my office reflects the diversity of the city we serve. We have strong human relations policies, more African- American attorneys than any law firm in the Commonwealth, and as many women as men both in the ranks and in leadership positions. In the year 2015, the times of winking at racism, sexism, or homophobia are over. On my watch, I won’t tolerate it."