Al Morganti: Serena Williams may have been wrong, but that doesn't make the umpire right 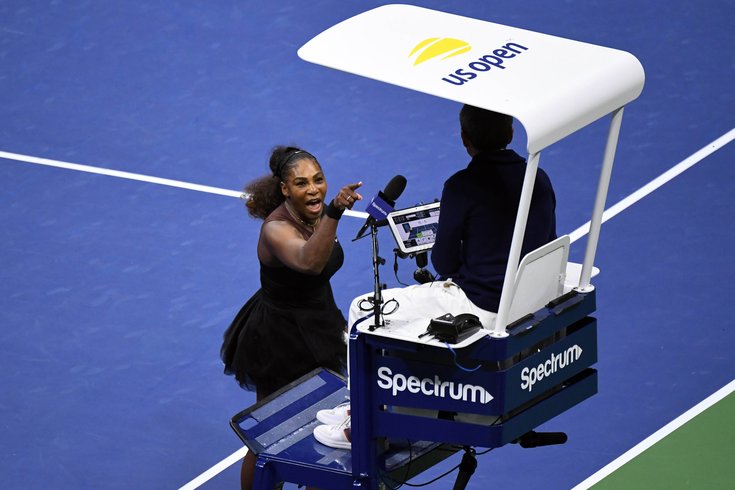 The Serena Williams meltdown at the US Open — and the resulting discussion — is only further proof of the lack of respect for women in sport, especially when it comes to Williams.

There are many parts to this story, and many facets of both right and wrong.

The entire sequence was set in motion when the umpire decided to penalize Williams for a coaching infraction — the whole ugly spectacle began right there when he decided to make that decision, a decision it's still hard to believe was even made at the finals of the US Open, not to mention against a legendary player such as Serena Williams.

After that, Williams lost her cool — and the match — and started a conversation concerning the lack of respect for women in the sport.

Was Williams was wrong to go to the extent she did on the court? Sure. The tantrum took attention away from the brilliant effort of her opponent, Naomi Osako, the rising 20-year old star who handled the situation with class and deference to the legacy of Williams.

The whole matter could have been handled better, and that starts with the umpire, who should have gone out of his way to do everything possible to make sure he did not become the story and allow the championship to be settled on the court.

Although there have been suggestions that the same coaching infraction would have been called against a top tier male player, it’s hard to believe that would have been the case in a Grand Slam final featuring Rafael Nadal, Roger Federer or Novak Djokovic, or, even more implausibly, back in the day John McEnroe and Jimmy Connors.

Williams was outraged by both the call and, presumably, the lack of regard she given, appearing horrified at the suggestion of cheating. However, none of that could excuse a tantrum that went over the line and showed a lack of respect for the game and the opponent.

Williams did recoup her cool when it was finally over, as she was complimentary to the winner, but make no mistake that the competitive fire that has driven her throughout her career was still burning. Her biggest point is that her conduct would simply be viewed as intensity if she were in the men’s bracket, but because she's a woman, it was seen as an emotion collapse.

Point taken — but she was still over the line in her conduct. The shame is that somebody who wasn’t even playing the game started the whole ugly scene.

There's no excuse for the debacle the Phillies presented on Monday night, when a game had to be postponed because of poor field conditions. And it had nothing to do with the weather on the day of the game, or even the day before. Or the day before that.

The whole mess began on Friday, when the Phillies put their faith in a weather report that called for only light rain overnight. Instead, there was a Biblical downpour.

There are times when common sense should take over questionable information. If you are driving by GPS and you are headed into a lake, you should probably stop and take another route.

Well, anybody with a window last Friday would have realized the weather reports were wrong. By dawn you could have sailed Noah’s ark in the infield, which by the way, had never been covered.

The lasting impression will be an organization that sent its grounds crew out with blow torches to try to dry out the field — and isn’t that appropriate?

The Phillies' season has been blow torched by a late-summer swoon that began in mid August and has continued through September. The Phillies came into the last stages of the season with every opportunity to keep pace with the Atlanta Braves and then close the deal with seven head-to-head games at the end of the season.

Instead, the team has fallen apart, and the manager Gabe Kapler sounds ridiculous when he attempts to put a positive spin on the situation. Very simply, the Phillies have not stood up and met the challenge.

Night after night, game after game, there are base running mistakes and defensive disasters. There are times it appears the players in the field don’t actually believe in the laws of gravity, or the baserunners seem genuinely confused by the concepts of distance and time.

The manager and coaching staff will have to answer as to why basic stuff hasn’t improved as the games became more important. Perhaps there is something to the argument that there are too many players who are out of position, not the least of which is Rhys Hoskins in left field rather than first base.

Time is quickly running out on this particular edition of the Phillies, and you have to know it truly hurts ownership to see hopes of a full building during a September pennant run quickly turning into a dreadful scene of a near empty building.

It is not a pretty picture, especially if you add in the video of the blow torches being used to dry the field on Monday night.

The long term fallout will go past this season. No matter what the final outcome, there's no doubt Kapler and general manager Matt Klentak will be under a whole lot more pressure going into next season. On the good news on the front – watch for a mad dash toward the free agent market.