Kapler's Phillies are 4-7 in August, and are fading fast in the National League wild card race 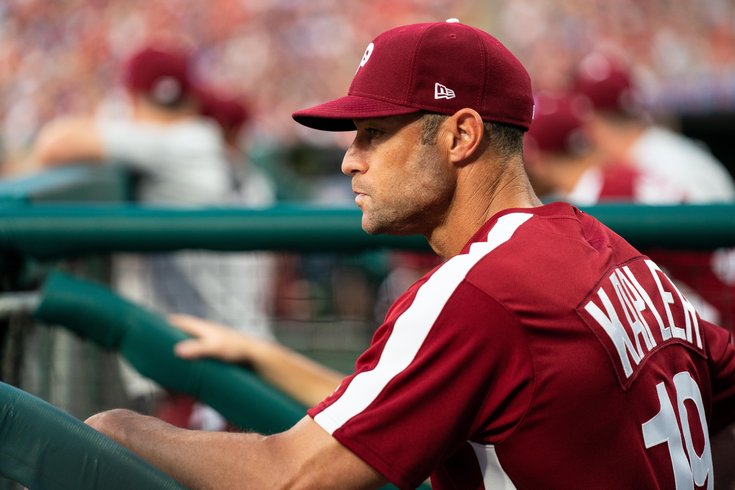 Alex Rodriguez chided Phillies manager Gabe Kapler for "careless managing" in a 9-6 loss to the Giants.

The Phillies lost to the Giants, 9-6, Sunday night on national television. The Phils have lost five of their last six games, and have lost three straight series as their playoff hopes tumble into oblivion.

As the world crumbles around the Phillies' 2019 season, former All-Star and current ESPN commentator Alex Rodriguez chimed in during Sunday night's broadcast with an appraisal of second-year manager Gabe Kapler.

After Kapler chose to let Nick Pivetta pitch to a red-hot Kevin Pillar in a tie game in the eighth inning, including with a 3-1 count, Rodriguez decided he'd seen enough of Kapler's managerial decisions.

"A silly, careless pitch here with a fat, fastball right down the middle. No need for it. 94, center cut. You have a base open, the struggling [Brandon] Crawford,"  Rodriguez said. "And there's no need for the hot Pillar to get a pitch this good in this situation. Walk him. Pitch to Crawford. That's a mistake by Gabe Kapler. And now you walk Crawford and now you get to face Panda. Careless managing. Even more careless pitching for the Phillies."

The Giants went on to score two more runs in the inning, including driving Pillar home.

Unsurprisingly, some local voices (and plenty of fans) heard Rodriguez's laments, and echoed what he had to say:

Im not a big fan of ARod the broadcaster, but, my God, he’s done a great job tonight of identifying and skewering everything Klentak and Kapler have done to screw up the @phillies.

The Philadelphia Phillies embarrassed themselves on Sunday Night Baseball. Gabe Kapler totally exposed himself as being in over his head. ESPN’s Alex Rodriguez called Kapler out. ⚾️⚾️🤔🤔

ARod was spot on with calling out Kapler on that Pillar AB with Craw on deck. Came back to kill them...

me normally: i hate arod's commentary

me listening to arod commentate for two minutes: you know what? he's right. gabe kapler owes everyone an apology.

Kapler's second year hasn't inspired heaps of confidence from the Phillies' faithful. The team has, for the second straight season, surrendered a first-place spot in the NL East and failed to find momentum in the back half of the schedule.

USA Today's Bob Nightengale reported last week that Phillies executives believe Kapler's job will be safe, even if the team misses the playoffs. But maybe that changes if the cacophony around Kapler's performance grows louder still.