So is the legendary shock rocker’s new album, which he plays tonight in Camden 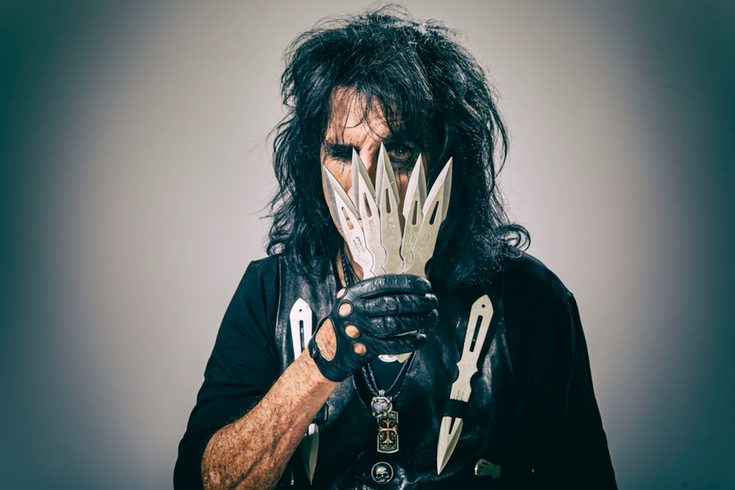 “Remember, I never quit touring. It’s been like 45 years, non-stop. I know how to do this – pace myself," said Cooper.

Age may be just a number, but, in Alice Cooper’s case, it is barely even a fraction. At 69, the always-gigging, always recording shock rocker is currently touring for the release of his new album, “Paranormal.” He performs at the BB&T Pavilion showcase tonight with Deep Purple and Edgar Winter and outpaces everyone around him when it comes to endurance and staying power.

RELATED READS: Roger Waters creates an 'Us + Them' scenario with current tour | Ghost: seeing past the metal and the mask | Howard Jones: it's just a new wave of EDM

Talk to him about recording and co-writing three of the strongest songs on “Paranormal” with Michael Bruce, Dennis Dunaway and Neal Smith – his high school buddies from Arizona with whom he came up in the glam rock ranks and made platinum smashes (“School’s Out” and “Elected”) – and Cooper sounds both like a kid and a drill sergeant.

“You know when I went off and started my solo thing (with 1975’s "Welcome to My Nightmare"), nothing was wrong. We didn’t leave each other with bad blood. There were no lawsuits. Nothing awful happened. We were just creatively exhausted after doing seven albums in a row, and their tours, without stopping. We just got tired,” he said.

But the foursome stayed great friends and golf buddies. (Yes, there’s an Alice Cooper Gold Tournament in Phoenix. Recently, during a 18-hole stretch, Smith told Cooper that he was writing with Bruce, which left Cooper curious to hear the fruits of their labor; which he did before inviting Dunaway down to the studio.

“Next thing you know, we’ve written three of the best songs on “Paranormal,” Cooper said of men he hasn’t worked with since 1974.

“But I told them straight away – you don’t just get to write them. You have to play them in the recording studio – 9- to 10-hour stretches – and now, we’re doing this thing on the road with my regular band.”

“My regular band plays. They cut my head off. The curtain comes down, and when it comes back up, it’s the original band and me doing five songs, some old, some new. It’s great. I’m really putting these guys to work.”

Lest you think that Cooper is only doing this to old friends that he grew up with, take what’s happened with his other band – the Hollywood Vampires – with actor Johnny Depp and Aerosmith guitarist Joe Perry. During that band’s last tour, Perry got sick and had to sit out shows, with Depp also looking worse for the wear. Alice? He ran around the stage, singing and spinning and looking fresh as a daisy, runny mascara and all.

“I’m older, but I’m in better shape than those guys,” said Cooper.

“Remember, I never quit touring. It’s been like 45 years, non-stop. I know how to do this – pace myself. And I really am in better shape since I don’t smoke and haven’t had a drink in 35 years.”

I know how to do this – pace myself. And I really am in better shape since I don’t smoke and haven’t had a drink in 35 years.”

As soon as Cooper’s “Paranormal” showcase is done in December, he’s heading back into the studio with Perry, Depp and whole new set of fresh songs for yet another Hollywood Vampires record, which they’ll tour in 2018.

“My whole career has been ‘paranormal’ – beyond normal – and not like anyone else’s, with every album of mine having its own flavor,” he said.

The spice that defines this newest album is that it is multi-flavored, one without a definite or singular theme – a rarity for the man whose every record is a wanton, rock soap opera or a psychologically ferocious soliloquy.

Unlike many of his rock icon contemporaries, Cooper has never stopped recording new material and therefore, has something fresh to offer every time he steps out into the touring market. Major label or independent, big budget epic sounding affair or lo-fi garage rocker, Alice Cooper will not cease.

“I have like 300 self-penned or co-penned songs that I have released, which means I have like 1,200 songs in the garbage can,” he said with a laugh.

“I’m picky. But whether I write or somebody else writes a song and gives it to me – I rate it as to whether it has potential or not. I don’t care who writes it. You could write it.”

“As long as I can turn it into an Alice song, I will work with anybody. Look, if you asked Paul McCartney or Bob Dylan if they’ve written their best song, they would say no. Same thing with me. I have not yet written my best song, or performed my best show. I still want to write that one song that turns the world around. I can’t wait to make the next album. When I get to the point that I don’t feel like that, I really should retire.”

Don’t quit Alice, at least not until I write that song with you.