Roger Waters creates an 'Us + Them' scenario with current tour 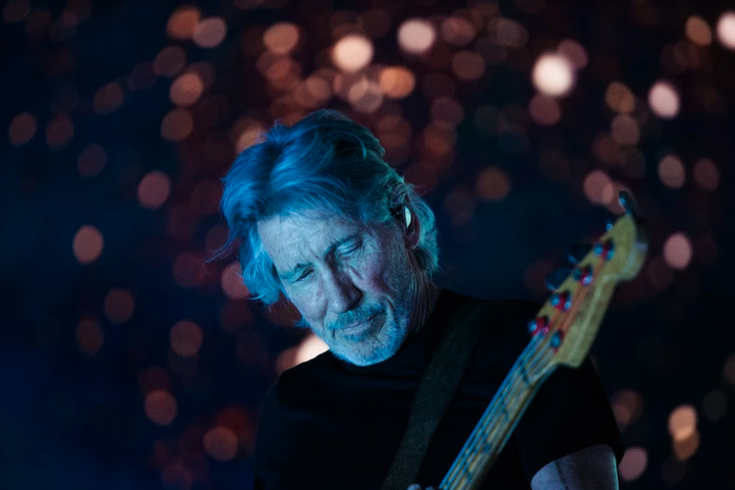 Roger Waters brings his "Us + Them" tour to the Wells Fargo Center in South Philly Aug. 8, 9 and 11.

Anyone who has been a fan of Roger Waters in the past knows that he’s not a man to pull punches, whether his jabs are particularly popular maneuvers or not. Since co-founding Pink Floyd in 1965 (and leaving it, in tumult, in 1985), Waters has refused to shy from controversy and activism – showing support for Chelsea Manning in 2013, all-but-spearheading the Boycott, Divestment and Sanctions (BDS) movement against Israel since 2011, and now – with his current "Us + Them" tour which lands at Philly’s Wells Fargo Center August 8, 9 and 11 – playing old songs and new (“Is This the Life We Really Want?” was released in June) with a live show that leans heavily on anti-Trump-ian sentiment.

A 23-song dress rehearsal at the Meadowlands Arena in East Rutherford, N.J. on May 21 was a perfect first look at the spectacle that is the wooly, tech-heavy, new Waters showcase: all quadrophonic sound, LED screens and giant floating inflatable props – each with its own relevance to Waters’ days-gone-by such as a laser pyramid dedicated to 1973’s “Dark Side of the Moon" use of the handshake imagery from 1975’s “Wish You Were Here,” the flying pigs motif used on 1978’s “Animals,” and more than a few bricked-up references to “The Wall” of 1979.

Beyond such frippery, however, it was the deeply human element of the songs and their master’s voice that mattered most. The 73-year-old Waters appeared in great shape – physically, vocally – as he led a backing nonet of male musicians (a new band including one-time Beck drummer Joey Waronker) and female backing vocalists (the ladies of Lucius wearing tortured platinum Sia wigs) through an epic evening of accusatory, yet tenderly emotional song.

While the newer tunes – a windy “Déjà Vu,” a crunching “Picture That” – fit into Waters’ Pink Floyd sound with ease, it was those aged (but poignantly relevant) classics that had the greatest effect; and not just due to their familiarity. The loud, cash register ring of “Money” acted as a slap in the face to those without. The floating hogs – featuring some radical, rude anti-Trump imagery – only truly worked during the taunting “Pigs” track, when Waters repeated the words "charade, charade," damming the current President in a way that neither CNN nor The New York Times could. “Another Brick in the Wall (Part II),” performed with a choir of grade-school aged children, baited teacher-student relationships toward solid change, not complacency.

As the lush, art-damaged jazz of “Us + Them” (complete with saxophonist Ian Ritchie’s tense romantic solo) blared throughout the cavernous room, what was once intended as an intimate look at the breakdown of a relationship grew larger and colder, embracing the heartache that exists in all levels of societal division. Still, by the time Waters and company – an ensemble whose eerie elegance had as much in common with the sonic boom of Radiohead as it did his own Floyd-ian legend – came to its encore with the swooshing “Bring the Boys Back Home” and a grandly blistering “Comfortably Numb,” the singer and bassist had brought it all back around, by making our struggles, failings, and ills his own in a show of empathy and grace.