The bluegrass star talks record-making, early influences and with eight albums under his belt, he's nowhere near done 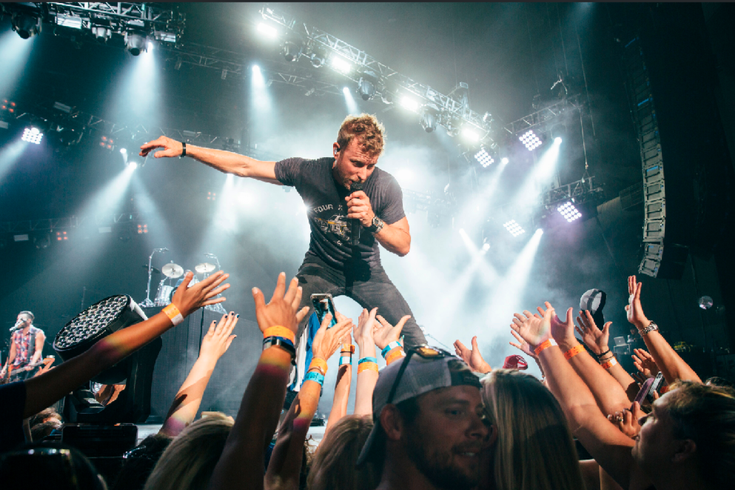 "I don’t want to leave what I’m feeling in me. I need to get it out," said Bentley.

Since the recording industry is in shambles, the harsh reality is that recording artists make their money touring. It’s not about albums anymore. Some veteran acts refuse to make albums, which cost time and money, since, some would argue, there is little return.

And then there’s Dierks Bentley, who focuses on his releases as much as his concerts. One of those concerts takes place this Saturday, Aug. 5, across the river in Camden.

“I want to go out and make the best records I can make,” Bentley said.

“Who knows how many more records I’ll be able to make. So I give it my all every time I’m in the studio.”

Bentley, 41, who co-writes much of his material, has evolved with each album.

“I was young with the first album and that one was about the musicians,” Bentley said.

“But each album has gotten deeper. They each reflect where I was. Early on, it was about being single, and then the albums got deeper once I got married and had a child.”

His latest album, “Black” is darker and more poignant than any prior release. The new tunes are slower and the grooves bigger.

“I grew up with records being played all the time,” Bentley said. “That was what it was all about.”

While coming of age in Phoenix, Bentley was all over the map in terms of music.

“I just fell in love with concerts at that point. And it just got better when I saw Dwight Yoakam, U2 and Garth Brooks. And then I caught Bruce Springsteen. What all of those recording artists have is the ability to turn it up during live performances. They're all great live entertainers. Springsteen is off the charts. He can play three hours and not even scrape the surface, but then there [are] us mere mortals. If I can do 90 minutes and hit them hard, I did good.”

Bentley has released eight albums since making his debut in 2003, which is crazy prolific for a country star.

It’s good to be inspired. I don’t want to leave what I’m feeling in me. I need to get it out.”

“I’m compelled to make music,” Bentley said. “That’s where my passion lies. If it weren’t, I would focus on touring.”

The laid back family man has made his most serious album. However, many of his fans come out to see Bentley belt out such lighthearted fare as “Drunk on a Plane” and “What Was I Thinkin.”

“There’s a place for the fun, up-tempo songs,” he said.

“I almost didn’t put “Drunk on a Plane” on the album, but I’m glad I did because it’s so much fun to sing every night. You look out and everybody is singing it. I can’t deny how much fun that is.”

Bentley is focusing on his tour, but he’s already thinking about making his next album.

“It’s on my mind because it’s important to me. I want to make music. I have a lot to say. It’s good to be inspired. I don’t want to leave what I’m feeling in me. I need to get it out.”