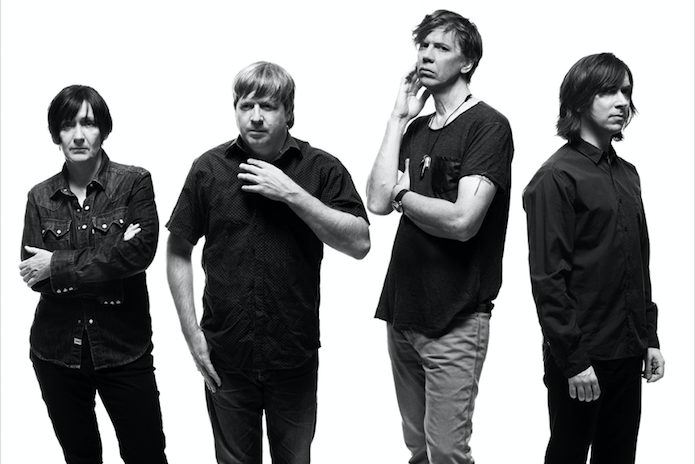 “At this point, and with so much weirdness afoot, it is impossible to see what’s going on in the old crystal ball. There are just so many smoke screens and falsehoods,” said Thurston Moore.

The name “Thurston Moore” has forever stood for the most honorable objectives where the American alternative rock continuum is concerned. From the latter-day 1970s into the present, he’s been an icon of No Wave atonality, indie rock leadership, abstract poetry, marital bliss (then its polar opposite as he was married to his partner in Sonic Youth, Kim Gordon, until they split), educator and innovator. Despite all that, being “conscious,” active, or activist beyond art and music never seemed a part of Moore’s socio-cultural diet – until now.

Moore’s newest solo album, “Rock N Roll Consciousness,” and his most recent tour, which brings him to Underground Arts on Saturday, July 22, shows audiences just how much he’s grown since his first Sonic Youth Album, 1983’s “Confusion Is Sex.”

“Yoko Ono once told me something about activism in music,” said Moore.

“She thinks that you go out and you talk about people with the energy of good will in terms of humanitarian concerns and that you don’t ever name the enemy. Once you name the enemy, you become the enemy. I took that to heart. That’s a curious, yet constructive way of thinking.”

Working from both a broadly political and an intimately concerned, interpersonal standpoint, Moore has never written with such love or concern. In one way, you can blame his having a daughter – the now 23-year-old Coco – for helping shift his aesthetic point of view, or at least focus its wafting abstractions.

“Any person working in any creative discipline gets changed having children, in terms of activism as an artist,” said Moore, thinking of new songs such as “Cease Fire” and his tribute to the then-imprisoned, now-released Chelsea Manning with “Chelsea’s Kiss.”

“I think it’s my age, you know? At near-60, I’m motivated by wanting to be in opposition to an ideology that borders on fascism. To articulate it as a writer means more than just saying it to myself.”

It’s not as if the one-time New Yorker, who now lives in London, wished to write about the particulars of the election cycle or Trump’s presidency. Far from it.

“The whole of my new record steps away from such direct commentary,” said Moore.

“Yes, there is honor in opposition, but I didn’t want it to have that dark energy. I wanted the sound of beauty, something beatific here – but with genuine melancholy, which is always part of the human condition.”

I wanted the sound of beauty, something beatific here – but with genuine melancholy, which is always part of the human condition.”

Looking for the beauteous meant, for Moore, new songs such as “Aphrodite” and “Exalted,” both of which speak to feminist energies and oracles. The extended, 10 minutes-plus jam of “Turn On” is meant to do just that. So, there’s a lot of love, passion, and worship of the feminine mystique that takes place within the psychedelic folksy finesse of “Rock N’ Roll Consciousness.”

“At this point, and with so much weirdness afoot, it is impossible to see what’s going on in the old crystal ball. There are just so many smoke screens and falsehoods,” he said.

“I mean, I am still very much an American. I did not renounce my citizenship. Still, it’s hard to watch my country being poisoned by racist and sexist inanity. Who wants to be defined by a president who uses the language of rape culture and the manifestation of hate speech? That’s disturbing.”