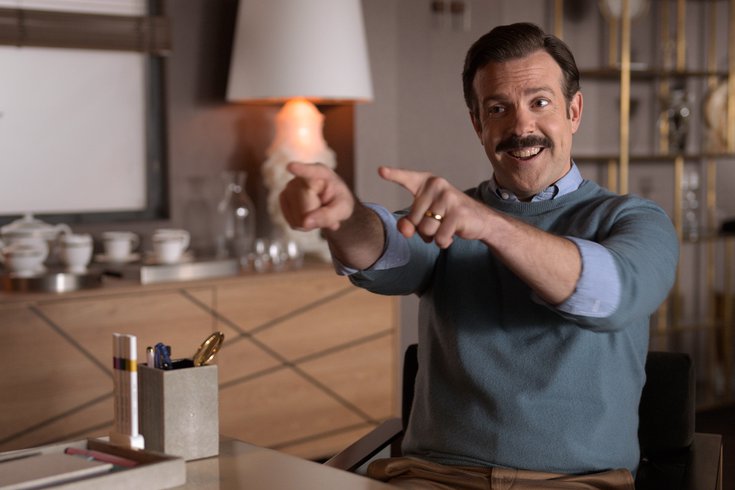 Jason Sudeikis will return to 'Ted Lasso' for a second season on July 23 streaming on Apple TV+. In Season 1, the series made an unmistakable reference to NBA Hall of Famer Allen Iverson's 2002 practice rant.

Apple TV+ has gotten firm footing among viewers over the course of the coronavirus pandemic, earning praise for several series, including "Servant," "The Morning Show," "Mythic Quest" and "Ted Lasso."

The success of "Ted Lasso" was a bit a surprising. The show was built from a series of NBC Sports commercials in 2013 and 2014, when Jason Sudeikis played an American soccer coach who was out of his depth. The whole point seemed to be that it's difficult to make soccer appealing to American audiences.

But Sudeikis teamed up with series co-creator Bill Lawrence — the mind behind "Scrubs" and "Spin City" — to craft a hilarious show that explores the life of an American football coach recruited overseas to lead the fictional AFC Richmond soccer club in the English Premier League.

The first season is filled with Sudeikis' bumbling wit and foolhardy cheer as he attempts to take command of his team, but one of the standout moments was a near word-for-word homage to Allen Iverson's infamous 2002 practice rant.

The moment came in the sixth episode as Jamie, a member of Lasso's team, told the coach he would sit out of practice due to an injury. Lasso recently had benched Jamie for failing to support his teammates.

One YouTuber spliced clips together from Iverson's press conference and "Ted Lasso."

In a recent interview with Indiewire, Sudeikis explained that he chose to include the tribute because he grew up in Virginia and followed Iverson's career from high school through the pros. He knew there was depth behind the practice rant. Iverson's outpouring of emotion had been influenced by the start of a murder trial for the death of his best friend, Rahsaan Langeford, who had been fatally shot seven months earlier.

"The reference by no means ever played to me as funny," Sudeikis told IndieWire. "Maybe somebody would say the moment is clever, but it was repurposing what I feel was a protest song by Allen Iverson in that moment and turning it into an opera, charged with more emotion."

Sixers head coach Larry Brown implied that Iverson had possibly been drinking before the press conference, an angle that got renewed attention in Ken Babb's inflammatory 2015 book, "Not A Game: The Incredible Rise and Unthinkable Fall of Allen Iverson." Iverson disputed that claim, but generally has embraced the fanfare surrounding the press conference as a piece of his unique NBA legacy.

The part of the press conference that's most often omitted is more important than anything Iverson said about practice.

"I'm upset for one reason — because I'm in here," Iverson said. "I lost. I lost my best friend. I lost him, and I lost this year. Everything is just going downhill for me, as far as just that — you know, as far as my life. And then I'm dealing with this."

Sudeikis said he felt Iverson's handling of the press conference has been misinterpreted over the years, though the 2014 documentary "Iverson" examines the issue more closely.

"He was angry about being asked about practice — and he says this right then and there — but he's also dealing with the death of a very close friend," Sudeikis said. "It's put him in a box in many people's minds. (…) It's, 'Oh, he wasn't a practice player,' and no, he's one of the hardest competing people in sports. To be 6'1" and dominate as he did at that time in the NBA is astounding. He was like, 'Why are you asking me about this? I'm dealing with real pain, and you're asking me about practice.'"

In the context of "Ted Lasso," Sudeikis considered the scene a calculated risk to connect with an audience that might relate to the reference on a deeper level. Some may have understood it as a pop culture shoutout, but those who know the full story behind the rant might interpret a more meaningful intent in the scene.

"Ted Lasso" will return to Apple TV+ for a second season on July 23 and already has been renewed for a third season.