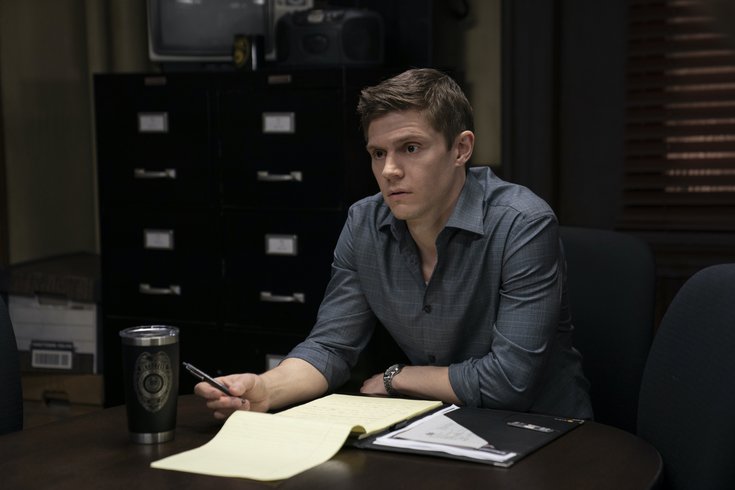 Evan Peters said he listened regularly to a 20-minute tape of 'this guy named Steve' to help comprehend the Delco accent.

One of the many aspects that made "Mare of Easttown" such a good show was the authenticity of the characters' accents, which accurately portrayed the unique dialect of the Philly region.

From Kate Winslet's titular role as Mare Sheehan to Evan Peters' performance as detective Colin Zabel, the distinct Delco accent could be understood and heard clearly throughout the seven-episode limited series on HBO.

Winslet said earlier this year that accurately adopting the regional dialect was important to her, even if perfecting it made her "throw things" due to the difficult nature of the accent.

In an interview with the Los Angeles Times that was published Tuesday, the 34-year-old Peters credited the murder-mystery show's dialect coach and the Philly-area filming locations for helping the talent nail the dialect. But Peters also unveiled a technique he used during production that helped him get the accent down.

"I also had a recording of this guy named Steve," Peters said. "It was about 20 minutes long and I’d listen to it every morning. He’s talking about his [chrysanthemums], his job and his wife. His brother, Pete. I felt like I really knew this guy. When the pandemic hit, we [shut down] until September. I thought, 'Oh, my God. I have to keep listening to Steve talk about the mums he planted?' So I didn’t listen to it every day — just a couple of times a week."

When preparing for the role of Zabel, Peters revealed that he took part in a police ride-along in Marple Township, Delaware County upon arriving in the region for filming.

"[The ride-along] consisted of helping to unlock someone’s car, then a 16-year-old was driving with her mother and she accidentally sideswiped someone’s side view mirror, and then, I believe, there was a lost St. Bernard at one point," Peters said. "I thought, 'Small town. Small town police.'"

Peters said that he also leaned on his St. Louis roots to tap into Zabel's character.

"I grew up in a small suburb outside of [St. Louis]. I understood the dynamics of the characters, the way everybody interacted," Peters said. "I always say that St. Louis, it’s all about the people. Everybody there is so nice and friendly, and nuanced, very interesting and real. I think we made [Zabel] a little bit more bumbling than we originally set out to. I was always tripping on things, dropping things. You know he’s not as good of a detective as Mare is. He’s just a little bit behind the curve."

Of course, Peters also shared his thoughts on Wawa after Winslet revealed that she and Peters frequently visited the convenience store chain during production. While Winslet favored Wawa's coffee, it was the Thanksgiving-themed Gobbler hoagie that caught Peters' attention.

"[Wawa's] got great coffee, hot food, chips, they got all of it," Peters said. "Most importantly, they have this [hoagie] around Thanksgiving called the Gobbler. It has all of the Thanksgiving accouterments. Turkey, cranberry sauce, stuffing, gravy. You don’t even need to cook Thanksgiving dinner. You can just [eat] the Gobbler."

Wawa and "Mare of Easttown" have all but become synonymous at this point. The show's wardrobe was based largely upon customers in Wawa checkout lines. Wawa coffee and hoagies can also be seen throughout the seven-episode series.

The convenience store chain rolled out a limited edition "Mare of Easttown" spicy cheesesteak at locations across Delaware County earlier this month in honor of the show.

Set in Philly's western suburbs, "Mare of Easttown" followed Winslet's character as she sought to solve a murder investigation and two missing persons cases while navigating through struggles in her personal life.