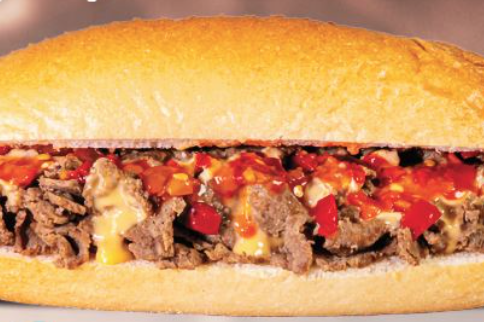 It was only a matter of time, but the Philly region is officially getting a "Mare of Easttown" cheesesteak courtesy of Wawa.

Starting Thursday, the convenience store chain is rolling out a spicy cheesesteak in honor of the whodunit HBO drama. The hoagie is made on a shorti roll with steak, cheddar cheese sauce and spicy cherry pepper relish, which Wawa said is "a nod to how spicy the show is."

However, it only will be available from June 10-17 at 42 Wawa locations across Delaware County.

From Thursday through Sunday, fans can share their favorite "Mare of Easttown" moment on social media for a chance to win a Delco celebration fan kit that consists of a limited edition Wawa Delco t-shirt and a $25 gift card to taste test the show's official cheesesteak.

The first "Mare of Easttown" spicy cheesesteak will be given out Thursday morning to Chester County detective Christine Bleiler, who served as actress Kate Winslet's inspiration for the Mare Sheehan character.

This isn't the first hoagie created in honor of the show, either. Don's Deli & Catering in Boothwyn serves up "The Mare," a massive hoagie with roasted turkey, cranberry sauce, stuffing and mayonnaise on a long Serpe & Sons Bakery roll.

The rollout of the limited edition cheesesteak is just one of several things Wawa has planned for its "Mare of Easttown Day" festivities this Thursday.

Wawa said that the day-long event will "celebrate the authenticity of the show as it depicts the culture and resilience of a community that stands by one another during good times and bad, and shines a light on everyday heroes who go to great lengths to serve their community."

In honor of the show's "commitment to raising awareness about mental health issues," Wawa is donating $10,000 to CHOP to fund a web series that will educate families and caregivers on how to identify behavioral health concerns in preschool through college-age children through the pediatric institute's Healthy Kids, Healthy Minds program.

The convenience store chain will also donate $1,000 to the Upper Darby police and fire department's charities of choice in tribute of "their ongoing commitment to serving our community, just like Detective Mare Sheehan did in the show."

Wawa's "Mare of Easttown Day" will also celebrate the convenience store chain's new location at 418 West Baltimore Pike in Upper Darby. The new store has been relocated from 502 South Oak Ave. in Primos.

The new location will open Thursday morning with free coffee, as well as limited edition Wawa Delco shirts for the first 100 customers.

Wawa played an integral role in the production of "Mare of Easttown." The show's wardrobe was based largely upon customers in Wawa checkout lines, director Craig Zobel said. Wawa coffee and hoagies can also be seen throughout the seven-episode series.

Additionally, Wawa was a popular spot for talent to refuel while filming the show. Winslet frequented the convenience store chain for its coffee during production. Evan Peters, who played the role of detective Colin Zabel, became obsessed with Wawa's Thanksgiving-themed Gobbler hoagie.

Set and filmed in Philly's western suburbs, "Mare of Easttown" followed Sheehan as she sought to solve a murder investigation and two missing persons cases while navigating through struggles in her personal life.