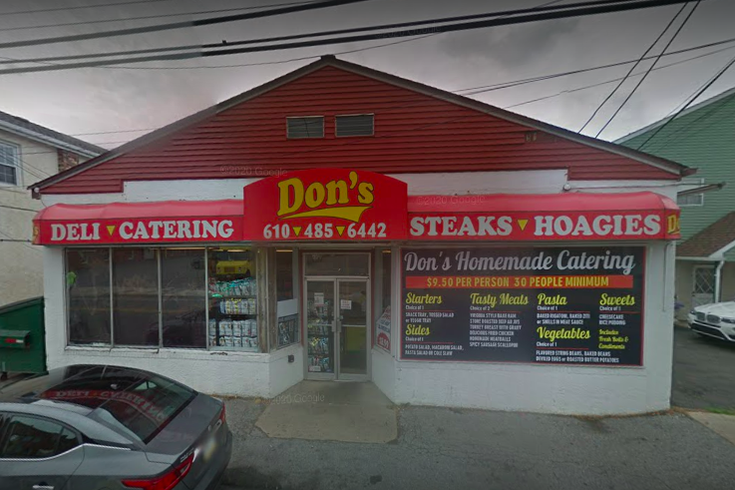 One of the filming locations of the hit HBO show, 'Mare of Easttown,' created a house speciality to celebrate its role in the show. "The Mare" is a hoagie with roasted turkey, stuffing, cranberry sauce and mayonnaise.

Fans of the Delaware County-based HBO crime drama, "Mare of Easttown," can now order "The Mare" — a hoagie inspired by the popular show — at Don's Deli & Catering in Boothwyn.

"Mare of Easttown" follows Mare Sheehan, a small-town suburban Philadelphia detective played by Kate Winslet, as she attempts to solve two murder cases. The show has received praise for its authentic portrayal of Delaware County, including local Easter eggs like Wawa and a spot-on Delco accent.

The 62-year-old Don's Deli was one of the series' filming locations, and owner Michael McKinney Jr. said they created a sandwich to celebrate it, PHL17 reported.

"The Mare'' is a massive sandwich comprised of roasted turkey, cranberry sauce, stuffing and mayonnaise on a long, fresh Serpe & Sons Bakery roll.

"The ingredients of The Mare are similar to other sandwiches in our area, like the Gobbler and the Bobbie," McKinney told The Delco Times. "We chose this type of sandwich because it’s ‘a Delco thing’ and we named it after Delco’s favorite girl!"

McKinney said when HBO location scouts visited the deli in 2019, the employees thought it was a joke at first.

"This was a huge opportunity for us. The store gets a lot of attention, it's been here for 62 years," McKinney said.

Filming took place on Nov. 4, 2019, and the show later premiered in April of 2021 after COVID-caused production delays. Set designers, producers and staff were eating at the deli during the filming process, he said.

"Featuring Don’s Deli & Catering in the series was such a brightener for this area — it brought such a good vibe to our whole town," Amy Kilgore, McKinney's sister and the office manager at Don’s Deli, told the Delco Times. "It’s been a once in a lifetime opportunity for all of us. We are so grateful to HBO!"

The deli hosted an all-day viewing party on May 16 for episode five of the limited series, which was supposed to feature the deli. They had a red carpet, cardboard cutouts of the stars and raffle drawings for prizes like iPads and a TV.

However, the scene ended up getting cut from the episode at the last minute.

"This was a once in a lifetime opportunity, for which we're beyond ecstatic and thankful," according to a Facebook post from the Deli. "Sometimes you end up on the cutting room floor. That's showbiz baby!"

The deli is apparently featured in future episodes. After hearing about the viewing party, Kate Winslet sent a personal video message to the local fans apologizing for the cut and thanking them for supporting the show, PHL17 reported.

The show has sparked lots of conversation online, from the quality of Winslet's Delco accent to local landmarks like Wawa, where costume designers visited to get inspiration for the show. It was even spoofed on SNL earlier this month in a sketch called "Murdur Durdur."

Don's Deli, located at 1509 Meetinghouse Rd. in Boothwyn, is a Delaware County staple. It serves up weekly specials for its cheesesteaks, hoagies, milkshakes and more. McKinney, who was born and raised in the area, purchased the deli from its previous owners, Jen and Jim Evans, in July 2019. The original owner, Don Horton, founded the deli in 1958.