Will history repeat itself during American Revolution Beer Pong?

The Museum of the American Revolution, which is set to open in Philadelphia in spring 2017, will host American Revolution Beer Pong on June 23. The game will take place at New Liberty Distillery's historic venue in Kensington. Once again, the Blue Coats will be up against the Red Coats.

The tournament will recreate five key battles of the American Revolution on the pong table, which will actually be a converted whiskey barrel.

Below is the gist of how the game will be played (Patriots, start practicing. Let's not let America down). 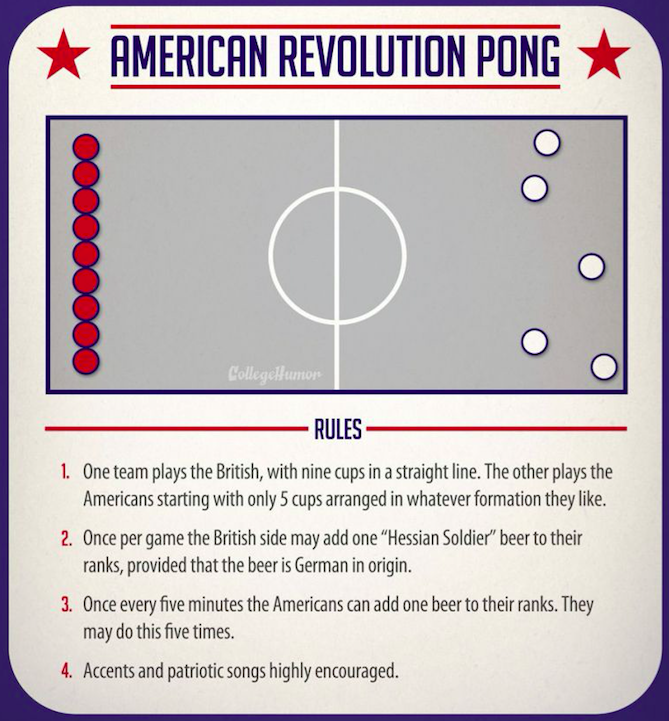 Courtesy of Museum of the American Revolution/Collegehumor.com

Here are the rules for playing American Revolution Beer Pong.

When not on the table, enjoy beer and cider tastings from Sam Adams and the Boston Beer Company, along with appetizers and small bites from Corner Bakery, Campo’s Deli, Di Bruno Bros., Brûlée Catering and Starr Restaurants.

To really get everyone into the revolutionary spirit, Art in the Age’s “Philadelphia Fish House Punch,” a recipe that can be traced back to 1732, will be served.

A cash bar of New Liberty specialty cocktails will also be open to aid thirsty players through the night.

Tickets for the event, which kicks off at 5:30 p.m., are $20 per person. The prize pack for the tournament's winning team includes Phillies tickets, gift cards and other goodies.