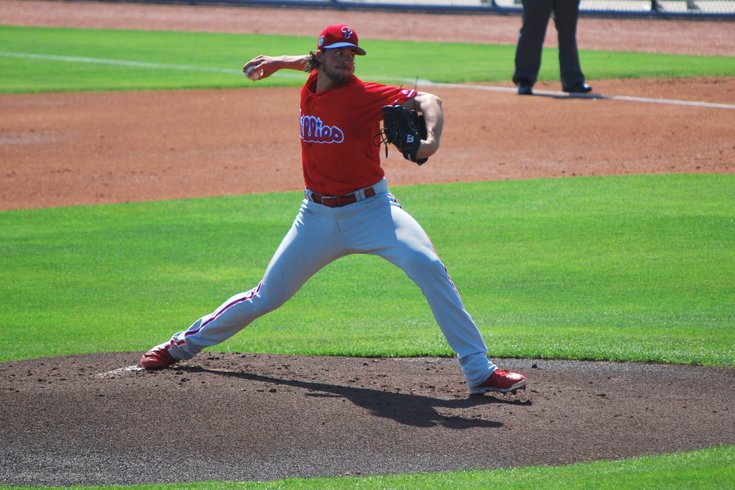 Aaron Nola throws a warm-up pitch before his first inning of work in Dunedin, Fla. Nola, in his first game action since July, held the Toronto Blue Jays to one hit in two shutout innings on Thursday.

DUNEDIN, Fla. – Spring Training radar guns often run as hot as the Florida sun in March, but it still must have been encouraging for general manager Matt Klentak, manager Pete Mackanin, and every other Phillies personnel to see the number “94” flash up under “MPH” on the scoreboard of Dunedin’s Florida Auto Exchange Stadium on Thursday afternoon.

The man suppling the mid-90s fastball was none other than Aaron Nola. And if anyone has any hopes of the Phillies being competitive in the next two seasons, there may be no more important player among the 63 in camp than Nola.

Even Nola himself was able to enjoy a little satisfaction with the fact that his fastball was humming in his first game of the exhibition season, a time when most pitchers are still building up strength and stamina.

“I think that just comes from my body having rest and doing what I needed to do strength wise and conditioning wise in Spring Training,” Nola said. “I’m just trying to maintain that and get stronger before the season starts.”

Really, everything was encouraging from Nola’s first Grapefruit League start of 2017 and his first time in a game of any kind since July 28 at Turner Field in Atlanta.

He threw two scoreless innings, struck out one batter, Jarrod Saltalamacchia on a fastball, and saw just one batter reach base. Jose Bautista jumped on a 3-1 fastball and ripped it high off the left field wall for a single.

And now your Debbie Downer moment-slash- reality check:  all of this occurred on March 2. Even if things continue to progress positively in the next month, Nola will not pitch in a game that matters for at least five more weeks.

And Nola will probably be reminded each time he pitches for the next five weeks, and into the regular season, too, that he missed the final months of the 2016 season with an elbow strain and, because it didn’t require surgery, that people are at least somewhat concerned that his arm woes may resurface.

“I try to throw all the negative stuff that happened last year out the window and focus on the positives and focus on this year,” Nola said when asked if proving people wrong fueled his adrenaline (and his fastball) on a humid afternoon in Dunedin. “It’s a new year and I’m just going to focus on it right now and maintaining my body and keeping it healthy.”

No score in Dunedin in the bottom of the 3rd. pic.twitter.com/Ytm5EomlSC

It is a new year, but even Nola's manager hasn't forgotten last year. Pete Mackanin can be included among the aforementioned people at least somewhat concerned about the issue resurfacing. After praising his pitcher's performance, Mackanin was asked when he would feel "totally comfortable" that Nola's elbow problems are a thing of the past.

"I’d feel totally comfortable if we get into June and there aren’t any issues," Mackanin said. "To be honest with you, I don’t foresee any, but you never know. I don’t know if the workload will catch up to him or not, and if it doesn’t, then we have a heck of a good pitcher there.

"But it’s always going to be an issue. I’m always going to wonder if he comes in one day and says it’s bothering him. But right now I’m staying positive and hoping he has no issues."

If Nola continues to pitch as he did on Thursday, the concerns will dissipate with each passing start. If the 30 pitches (16 for strikes), becomes 60 in two weeks, and then 90 by the end of the month, and he’s still popping fastballs in at 92-94 MPH and flipping his curveball over with ease to baffle opposing batters, he'll silence the doubters with his arm.

Perhaps the extended rest was all Nola needed, even if sitting on the sidelines felt more painful than his elbow did on that July night in Atlanta.

“Sometimes we take it for granted,” Nola said. “I’ve never been hurt or on the disabled list before. It kind of brought me back to don’t take it for granted because it really sucks to be taken away from when you can’t even throw. So I just tried to embrace everything during rehab and right now I’m not taking anything for granted.”

The result was an admittedly “amped up” Aaron Nola. He let it fly. He was able to do that because he has the faith and confidence in the health of his right arm.

“It’s a relief,” Nola said. “It’s definitely great to get back in a game situation again. … It felt all of seven months. I didn’t really know how long it was until I counted. It felt like forever.”