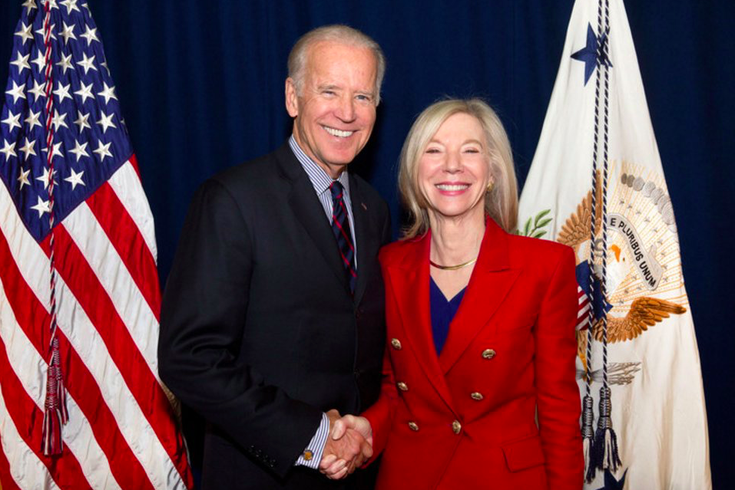 Amy Gutmann, who has been nominated to serve as U.S. ambassador to Germany by President Joe Biden, oversaw the rollout of the Penn Biden Center for Diplomacy and Global Engagement in Washington in 2017.

President Joe Biden earned his undergraduate diploma from the University of Delaware and his law degree from Syracuse University. But one could argue the educational institution that he has become most affiliated with, at least in recent years, is the University of Pennsylvania.

Those ties only strengthened Friday when he nominated Penn President Amy Gutmann to serve as the next U.S. ambassador to Germany.

Gutmann is Biden's first ambassador nomination to a Group of Seven nation, according to the Associated Press. She would be the first woman to serve as U.S. ambassador to Germany if confirmed by the U.S. Senate. Senate hearings on Gutmann's nomination have yet to be scheduled.

When Biden won the presidency last November, rumors circulated that Gutmann might be in line for a role in his administration, potentially as education secretary. Her qualifications, and his connections to the university, spurred the speculation.

In 2017, the university had opened the Penn Biden Center for Diplomacy and Global Engagement in Washington. The center, which has continued amidst Biden's presidency, has focused on diplomacy, foreign policy and national security.

Gutmann, who oversaw the creation of the center, previously called Biden "one of the greatest statesmen of our times" and credited him for "his unsurpassed understanding of diplomacy and far-ranging grasp of world issues."

"In [Biden's] distinguished career of service to our nation, he has demonstrated a unique capacity to bring people together across divides and to craft constructive responses to some of the toughest and most important policy challenges of our day," Gutmann said in 2017.

Before running for president, Biden served as the university's honorary Benjamin Franklin Presidential Practice Professor. He was based in Washington, but kept an office on main campus. Biden also had joint appointments in the Annenberg School for Communication and the School of Arts and Sciences, along with a secondary affiliation with the Wharton School.

Biden's connection to Penn began on a personal level. His late son, Beau, and his daughter, Ashley, have each earned degrees from the Ivy League school. So has his granddaughter Naomi.

Gutmann has welcomed Biden to campus several times as a guest speaker. On one occasion, she invited Biden and former Republican presidential candidate Jeb Bush to participate in an immigration forum, where they were asked to hammer out a compromise on the issue. Like Biden, Gutmann has stressed the importance of compromise, making it the focus of one of her 17 books.

Gutmann, 71, who became Penn's eighth president in 2004, will remain in her position until confirmation hearings begin. Her contract expires in June 2022.

"I cannot overstate what a meaningful and extraordinary honor it is to be nominated by the president for this important position of service to our country," Gutmann said in a statement released Friday.

"As the daughter of a German Jewish refugee, as a first-generation college graduate and as a university leader devoted to advancing constitutional democracy, I am grateful beyond what any words can adequately express to President Biden for the faith he has placed in me to help represent America's values and interests to one of our closest and most important European allies."

During her 17-year tenure, Gutmann also has served as the Christopher H. Browne Distinguished Professor of Political Science and as a communications professor at the Annenberg School for Communication.

Gutmann's focus on global initiatives also led to the creation of the Penn Wharton China Center in Beijing in 2015 and the school's Perry World House on its University City campus in 2016.

Along with having a close relationship to Biden, Gutmann also has been an outspoken critic of former President Donald Trump, slamming his administration's immigration policies as "inimical to our values."

In 2018, Fortune Magazine named Gutmann one of the "World's 50 Greatest Leaders."

Gutmann previously worked at Princeton University, where she served in a variety of roles, including provost and faculty dean. Gutmann also has worked at Harvard University's Kennedy School of Government and the University of Maryland.