The white supremacist organization, founded after the 2017 'Unite the Right' rally, spews a vile ideology under a thin veil of American patriotism 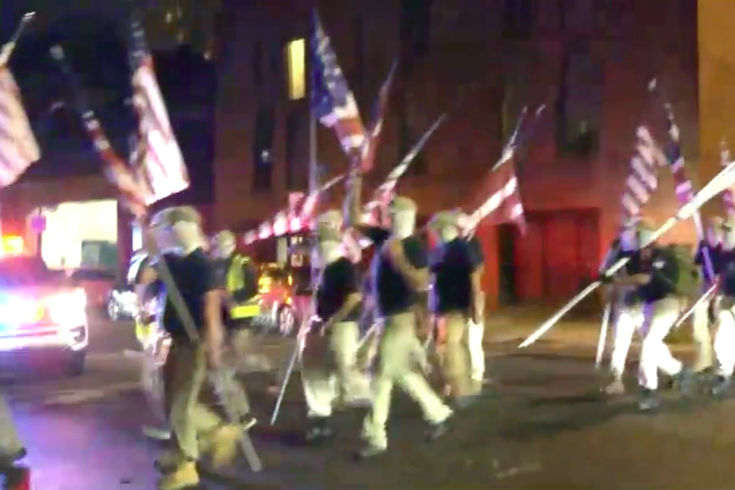 The hate group Patriot Front marches in Philadelphia on July 3, 2021. The white supremacist group carried flags and shields while chanting as they walked from the Benjamin Franklin Parkway to Old City.

The white supremacist group that marched through Center City on Saturday night is the same organization believed to have vandalized several George Floyd memorials throughout the United States, including a mural in the Olney section of Philadelphia.

About 200 masked Patriot Front members marched from the Benjamin Franklin Parkway to Old City, carrying shields as they chanted and waved flags, according to multiple media reports. They also scuffled with a group of bystanders who confronted them as they were loading their vehicles along Columbus Boulevard. Police later stopped the group's vehicles for safety purposes.

"They started engaging with citizens of Philadelphia, who were none too happy about what they were saying," Philadelphia police officer Michael Cram told 6ABC. "These males felt threatened, and at one point somebody threw a smoke bomb to cover their retreat, and they literally ran away from the people of Philadelphia."

There were no reports of injuries or property damage, police said. They did not say whether anyone was arrested.

Mayor Jim Kenney said he was "disgusted" that Patriot Front decided to demonstrate in Philly, calling white supremacy and racism "the greatest scourges" the U.S. has faced.

"While we respect everyone's right to exercise free speech, our administration stands against everything these groups represent," Kenney said in a statement to Fox29. "I'm personally appalled and disgusted these groups chose Philadelphia as the place to demonstrate their open hatred. Racism, intolerance, and hate have no place in Philadelphia."

The demonstration came on the eve of the city's Fourth of July celebration. The group, which also marched in Washington on Saturday, appears to have increased its activism in recent weeks.

In early June, a Floyd mural in North Philadelphia was spray-painted white and covered with Patriot Front's name, website and slogans. Several other memorials to Black people killed by police — including Floyd statues in Brooklyn and Newark, New Jersey, and a "Say Their Names" mural in Louisville, Kentucky — were vandalized in a similar manner later last month.

Both the Anti-Defamation League and the Southern Poverty Law Center classify Patriot Front as a hate group. It evolved from the neo-Nazi group Vanguard America following "Unite the Right" rally in Charlottesville, Virginia on Aug. 12, 2017.

During the rally, James Alex Fields Jr. drove his car into a group of counter-protesters, killing anti-racist demonstrator Heather Heyer. Fields had stood shoulder-to-shoulder with Vanguard America, carrying a shield bearing the group's fascist symbol, but the group has denied he was a member, according to the ADL.

Afterward, some Vanguard America members rebranded as Patriot Front in an effort to appear as mainstream, patriotic Americans and appeal to conservatives. The change was made under the leadership of Thomas Rousseau, who was photographed in Philadelphia on Saturday.

Rather than using Nazi imagery, Patriot Front shifted to an Americana aesthetic, but has maintained a "staunchly white nationalist" ideology, according to the SPLC. The group's manifesto calls for the formation of a white ethnostate and explicitly seeks to exclude people of color.

Patriot Front sought to chart a new path for white nationalists, according to ProPublica, which examined the hate group's origins in a November 2019 story. The group worked to recruit members "worried about a nation overrun by immigrants and world controlled by Jews." It avoids talking about guns and violence online, but its tactics include a mixture of vandalism and intimidation designed to create anxiety.

While many white nationalist groups were alienated from mainstream politics following the "Unite the Right" rally, Patriot Front has found success thanks to its branding, the SPLC says.

"Patriot Front is an image-obsessed organization that rehabilitated the explicitly fascist agenda of Vanguard America with garish patriotism," the SPLC says. "Patriot Front focuses on theatrical rhetoric and activism that can be easily distributed as propaganda for its chapters across the country."

Patriot Front, based in Texas, has sought to spark localized outrage through its activism, which previously has included the distribution of racist and anti-Semitic flyers on college campuses throughout the country, according to the ADL. The group is known for stenciling its name onto telephone poles and other public property.

The hate group also has held flash mobs, like the one in Philadelphia, where members demonstrate while wearing blue polo shirts, khaki pants and masks. They often uses smoke bombs, signal flares or torches.