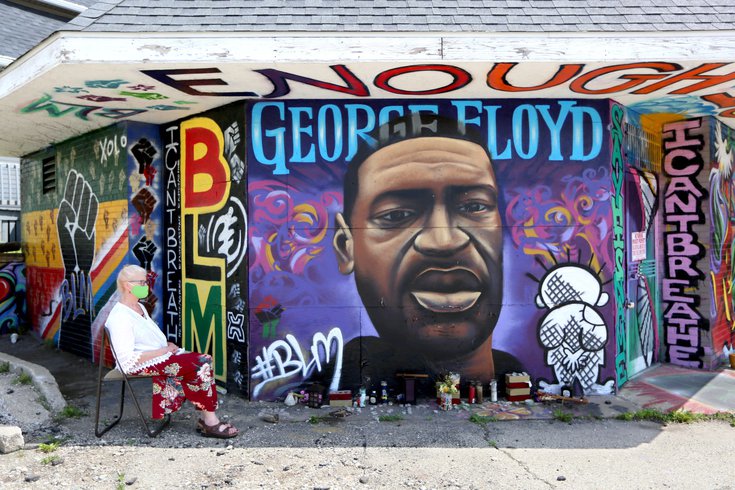 A mural in Philadelphia honoring George Floyd was defaced with white supremacist graffiti on Friday. Above is a file photo of a mural of Floyd Floyd in Milwaukee, Wisconsin, at the corner of North Holton Street and East North Avenue.

A mural in North Philadelphia honoring George Floyd was defaced with graffiti bearing the name and logo of a white nationalist group on Friday, prompting a police investigation into the hateful act of vandalism.

The mural, located at North Fifth Street and West Olney Avenue, was commissioned by the North 5th Street Revitalization Project. The nonprofit was founded in 2005 and promotes reinvestment and businesses in the community and organizes events to keep the neighborhood clean and safe.

The vandalism was first reported Friday by 6ABC. A photo showed the mural painted with the words "Patriot Front," the url for the hate group's website and other slogans, including one that said, "To Ourselves and Our Posterity."

The Anti-Defamation League lists Patriot Front among U.S.-based hate group, detailing a history of the organization and its activities.

"Patriot Front espouses racism, anti-Semitism and intolerance under the guise of preserving the 'ethnic and cultural origins' of their European ancestors," the ADL says.

A Philadelphia police spokesperson said the incident is being investigated by Northeast Detectives.

Floyd's murder while he was in the custody of Minneapolis police last May ignited a wave of protests and civil unrest across the United States, including multiple nights of demonstrations and an aggressive police response in Philadelphia that led to promises of reform from the department.

Derek Chauvin, the officer who knelt on Floyd's neck for more than nine minutes, was convicted of murdering Floyd's earlier this spring. Three other officers who were at the scene will go to trial in March after their cases were delayed amid new charges filed by the federal government.

The defacing of the Philadelphia mural comes a day after Minneapolis officials removed barricades and memorial displays at the intersection in that city where Floyd was killed. The area has been renamed George Floyd Square and was closed to traffic since his death. The memorial had been vandalized multiple times over the last year, including an incident in May when a man damaged the site with an ax.

Philadelphia police did not provide any additional details Friday about the investigation into the Olney incident.