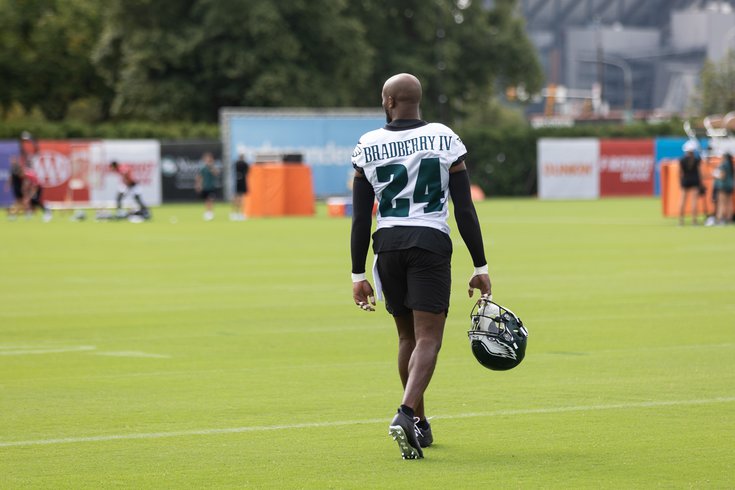 Howie Roseman and the Philadelphia Eagles' front office made their share of splashy additions this offseason, improving the team's roster, at least on paper. Here we'll take a look at how the those new players are fitting in with the team on the field so far in training camp.

• WR A.J. Brown: A.J. Brown is good. #Analysis. He is big and strong, and can outmuscle defensive backs on contested catches, and then get yards after the catch. Of course, if you watched him play in Tennessee, you already knew that. In practices, I have also been impressed by some of the subtle aspects of his game, like his route running, and his ability to show "late hands," not tipping off corners when passes are arriving, which only adds to his contested catch prowess. He has very quickly become Jalen Hurts' favorite target this summer, as he has dominated target share among the Eagles' wide receivers throughout camp (it should be noted here that DeVonta Smith has missed the last four practices). He is everything as advertised so far.

• EDGE Haason Reddick: Reddick has almost exclusively faced off against Lane Johnson in 1-on-1's, and Johnson has largely dominated those matchups, as he would against pretty much anyone. Early in camp, we saw Reddick dropping into coverage quite a bit, which raised concerns about his usage in Jonathan Gannon's defense, but more recently he has mostly been sent after the quarterback. Reddick's speed will add an element to the Eagles' pass rush that they didn't already have, and I imagine that facing off against other offensive tackles will feel a whole lot easier after squaring off all summer against Johnson.

• DT Jordan Davis: Davis has won with power and quickness both in 1-on-1's, and in 11-on-11's. You can look at his listed height and weight at 6'6, 340 pounds and know that he is enormous, but it's a different experience to actually see him in person. He makes guys like Fletcher Cox and Javon Hargrave look like undersized linemen. His combination of size and power is going to translate immediately in the NFL, and I have not yet seen any hints of stamina issues, which were a concern for some during draft season.

• CB James Bradberry: Bradberry has gotten his hands on a lot of passes, and has been Brown's best competition in camp, even more so than CB1 Darius Slay. He will likely match up against opposing teams' bigger receivers. Steven Nelson was a perfectly fine CB2 for the Eagles last season, but Bradberry is very clearly a significant upgrade.

• C Cam Jurgens: Jurgens started out camp strongly, showing that he could anchor against bull rushes, a concern for a smaller center at 6'3, 303 pounds. More recently, Jurgens has lost some leverage battles and has been pushed back into the pocket on occasion. Overall, there has been more good than bad. Jurgens will get a ton of first-team reps going forward with Jason Kelce having surgery on his elbow.

• LB Nakobe Dean: Dean has not yet stood out in camp, either in an obviously good or bad way. We've mentioned in our practice notes that so much of Dean's game is predicated on being the smartest player on the field, which he was on Georgia's elite defense. While he may become the highly instinctive linebacker that he was in college, for now he's trying to learn the defense at two different positions (MIKE and WILL), so it's reasonable to expect that it may take some time to see production from him, while the other linebackers on the Eagles' roster  — notably T.J. Edwards, Kyzir White, Davion Taylor, and Shaun Bradley — have all had standout moments.

• LB Kyzir White: White has good speed, and has flashed the ability to run sideline-to-sideline. He seems to make a lot of plays outside the tackles. If you'll recall in Week 2 last year, the 49ers were having no success running the ball between the tackles, so they adjusted and starting calling a lot of pitch plays to the edges, helping negate Javon Hargrave and the Eagles' DTs. The Eagles could have probably used White in that game.

• WR Zach Pascal: Pascal has only been a full go for three practices so far after missing the first week-plus with food poisoning. He lost a lot of weight due to his illness, and I'm still waiting to get a closer look at him as he gets back into playing shape.