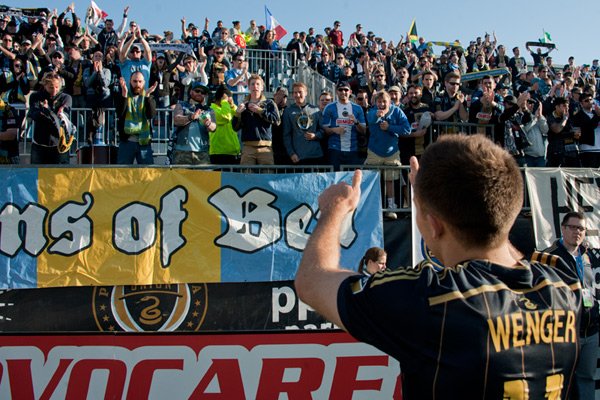 Lancaster native Andrew Wenger played more than 50 games for the Union over the course of two seasons.

Nothing about Andrew Wenger's MLS career has been easy.

Think back to day one, when the Duke standout was selected as the top overall pick in the 2012 SuperDraft. Everybody had a different opinion about what position he should play. Was he a forward? Was he a center back? Could he play in the midfield?

Montreal saw him as a striker, but those early years were fraught with inconsistency, much of which Wenger couldn't control. The Impact cycled through three head coaches in three years, and the Lancaster native soon found himself headed home to Pennsylvania in the 2014 Jack McInerney trade.

John Hackworth also saw Wenger as a striker, but that was short lived. Jim Curtin moved him over to the left wing when his predecessor was let go two months after the trade. That change seemed to spark Wenger, who finished the season with eight goals and four assists in all competitions.

For whatever reason, that form disappeared in 2015. Wenger seemed hesitant and unsure of himself, and the assertive winger that we saw the year before was nowhere to be found.

The Union traded Wenger to Houston last offseason in a package deal that also included midfielder Cristian Maidana. Wenger has been much better this season, bagging four goals and two assists in 16 games. He scored in last week's loss at Portland, then added a quality assist in the 3-1 midweek Open Cup win against Kansas City.

Wenger spoke with PhillyVoice about facing the Union for the first time since the December trade.

PhillyVoice: Thoughts on playing your former club this weekend?

Andrew Wenger: Yeah, it's exciting. I have lot of great friends there and it's good to see Philly doing well. But I play for the Houston Dynamo now, and we're looking for points right now and we need them desperately, so it should be a good game.

Was it the same feeling when you played against Montreal as a member of the Union?

We never really got to talk to you about the trade. It happened in the offseason and they sent you down to Houston with Chaco. Obviously Sheanon Williams was already down there. How did you feel about the trade?

We all know I didn't play very well last year. A lot of that is my fault and I understand that. It's good to have a fresh start. Either way, I was looking forward to this year, no matter who it was with. It was great to land in Houston.

Why do you think you didn't play well last year?

I really don't know. Sometimes you just get into a bad bit of form personally, things follow, and then before you know it, it's not going very well. But those things happen over time and you just try to get out of it as quickly as possible.

Maybe we abuse the term "change of scenery" in the media, but do you think that's played a part at all this year?

I think that always is helpful. I think it's also, as a person, just about evaluating what's going on and making that change personally. I mean, they go hand in hand. Obviously a change in scenery, like you said, can help stimulate that (personal side of things).

I don't know if bitterness is the right term, but were there any hard feelings about leaving Philadelphia via trade?

I mean, yeah, probably a bit, because I enjoyed playing there, and whenever someone thinks that you're better off somewhere else, or at least that you're not part of the group, then there's a little bit of bitterness there. But it's a business, and I understand what's going on. It's worked out for me, but I think anytime you've moved on from a place, you have to evaluate that.

Some players say that they like playing close to home, or in their hometown. Others say it can be a distraction. Can you look back on your time in Philly and make a judgment on that?

I enjoyed it. It was great to see my family and friends and play in front of them. It was nothing but a positive.

Let's talk about Houston. How do you feel about recent team performances? What was your take on Owen Coyle's departure, and how has Wade Barrett done since taking over?

I enjoyed playing for Owen. He gave me another chance and gave me a lot of confidence. But we weren't getting the results. You look at the table, and we weren't getting the results we needed to be successful. Since Wade has come in, he's given us a bit of form and discipline, and that's been helpful. He's given us a platform to go and get points, which we still need to do, and do consistently.

You had a nice assist in the recent Open Cup win, plus that goal in the Portland road game. How do you feel about your recent individual performances?

It's been good. I think anytime you can get on the scoresheet, one way or another, that's helpful. I think I've been putting in good work on both sides of the ball for the majority of the year. Obviously there's a poor game here or there, and you can always get better, but I feel good about the way I've played this year.

The @HoustonDynamo's @AndrewWenger skips past his defender w/ ease in one of our favorite #MLS goals of the weekendhttps://t.co/45e98NhP02

Going back to March, I think you had two goals and two assists in the first two games. Maybe it tailed off a bit afterward, but how important was it to get off to a strong start this year, considering how 2015 went?

I feel like I prepared well last year, but maybe had a couple poor bounces early on in the season and I guess I didn't take that well. That's something I need to do better in the future. It was helpful to get off to a good start (this year).

Do you still keep up with the Philly players?

Yeah, I do. I mean, some of my good friends aren't on the team anymore, but it's always good to keep up with them, and say hello, especially with the staff as well.

And how about meeting your new teammates in Houston? Did you and Sheanon and Chaco stick together initially?

We definitely hang out with each other, but I think, as a group, we're all pretty close together. Maybe it's helpful to have a familiar face and understand how they're playing, but we have a good group here.

How about this game then? How do you feel about Philly this season and the job that Jim Curtin has done? What do you guys have to do to get a win?

Philly has been good, man. They're finding goals in all sorts of places. And Andre has been unbelievable. Anytime you have that going for you, that's helpful in getting points. So, it's going to be a tough game. We're going to have to find some opportunities and be strong defensively.

Thank you to @PhilaUnion org., coaches, and my teammates for making my time in Philly enjoyable. Best of luck in the future! @SonsofBen