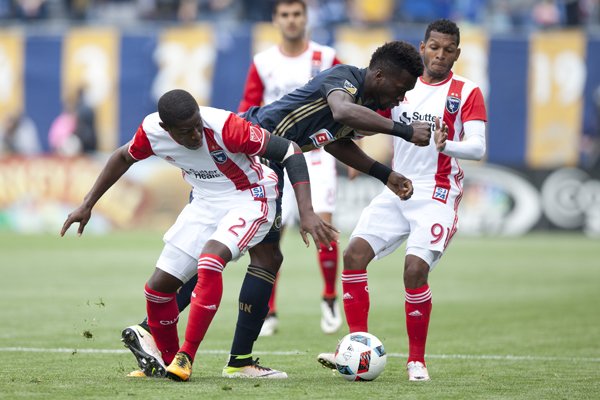 C.J.Sapong has missed four straight games with an ankle injury he suffered on earlier this month.

Union striker C.J. Sapong hasn't trained with teammates since going down with an ankle injury in the second half of a 3-2 win against Columbus back on June 1st.

Relegated to individual sessions, the club's top forward has spent the last 26 days trying to regain the ability to cut, jump, run, turn, and push off under the full weight of his 185 pound frame.

He's just not there yet.

"I can do everything half to 75 percent," Sapong told reporters following Monday morning's training session. "Just the way I play, I do everything a hundred percent, so maybe it's those cuts (that are noticeable), and sometimes I land awkwardly. It's those little things that don't seem like they matter when you're okay.

"But when you get a little tweak or an injury they matter a little bit more. I'm just trying to make sure that I cover all of my bases and when I come back, that I'm back for good. I don't want to come back, tweak it again, and be out for more time."

Say what you will about the Union missing Vincent Nogueira... they really miss C.J. Sapong. #PHIvVAN

Sapong worked to the side with sports science director Garrison Draper on Monday morning. Media members only caught about 20 minutes of straight-line, start-stop running as the rest of the team took part in short-sided scrimmages.

Later, Sapong worked very briefly with Maurice Edu in a light, one-on-one scenario. The striker would pick up the ball and dribble at the injured Union captain, who was able to turn and backpedal in defense.

It might seem insignificant, but any type of activity involving another player can only be a positive step.

"I guess you would consider it low ankle," said Sapong of his injury. "At this point, there's a lot going on, as far as other muscles feeling sore, and trying to catch up. So it's hard to pinpoint one area (that hurts), which is actually kind of the good, because the last three or four weeks (the pain) has just sort of been heavily (focused) in one area. It's looking good now and I'm optimistic about stepping on the field really soon."

Union are a much lesser team without Nogueira & Sapong. I expect @NYCFC to do well today, but maybe false positive.https://t.co/6c9BNlFI0G

Sapong didn't give an exact estimate on when he might return, or how many training sessions he might require to get back to full health.

He's second on the team with five goals and tops the Union depth chart at the striker spot. Most important, though, is his work rate and movement. Sapong is a prototypical center forward who does a lot of excellent things that might not show up on the stat sheet.

"I'm feeling optimistic," Sapong said. "Still trying to do everything that I can to make sure that I'm not only paying attention to my ankle, but all the other things that might go (along with it). You're not competing but you're doing a lot of stuff for four weeks. My head is in a good place, and I know that when I'm back I'll be at a hundred percent. I'll be back in a place where I can provide impact and help my team again."