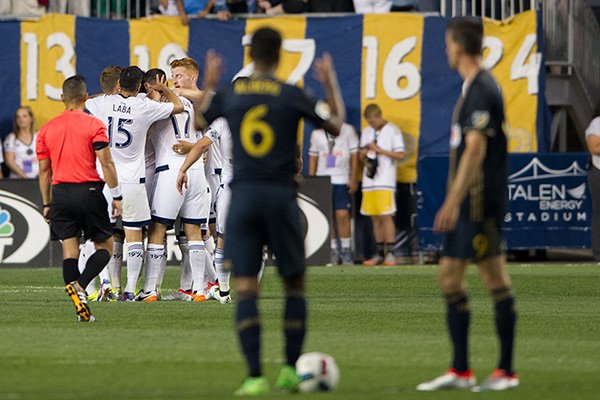 Before the Copa America break, the Philadelphia Union had one of the best defenses in Major League Soccer.

A young back four conceded just 16 goals in 14 games, and they were helped out immensely by goalkeeper Andre Blake and the commitment to team defense from a pair of savvy holding midfielders and two hard-working wingers.

But since the Centenario, Jim Curtin's club has shipped a whopping nine goals in three games. That 1.14 goals against average has skyrocketed to 1.47.

It's a mind-boggling contrast for the Union, who fell for the first time at Talen Energy Stadium on Saturday night. Visiting Vancouver scored from a goalkeeping mistake and a counterattack before adding a late goal and staving off an even later Union push. The Whitecaps snapped a ten-game home winning streak dating back to September of last year.

Philadelphia is now 0-3-3 vs. the western conference and faces a tricky U.S Open Cup match against the New York Red Bulls, before heading to Houston on short turnaround next weekend.

Anatomy of a goal

Let's start with a positive.

The first Union goal was one of the better sequences I've seen this franchise put together.

If Fabian Herbers could have put that ball in the top corner, it would have been a top ten all-time Union goal.

Early on, the trio of Roland Alberg, Tranquillo Barnetta, and Ilsinho was really buzzing. The movement was free, the vision was excellent, and the skill was top level.

Maybe the best part of the goal was the variety of techniques and ideas that were incorporated into it, from one-touch passing, to a brilliant layoff and a back-shoulder peel.

Here's how it went down:

Everything about this goal was excellent. It really was the perfect blend of skill (one touch passing, and beating players off the dribble), with hard work and commitment to finish the play (Herbers keeping himself onside, Le Toux and Alberg crashing the box).

We're starting to see a team that can pass the ball as well as anybody and create highlight-reel goals that other Union teams just couldn't pull off.

Anatomy of conceding a goal

The issue for the Union is that this personnel grouping doesn't provide as much defensive cover as the starting eleven that we saw earlier in the year. Vince Nogueira brought a certain balance to the side, and while he wasn't a defensive machine, he was very smart about timing his forward runs and keeping the shape of the team.

Watch how easily the Union are caught on this Vancouver counterattack.

Barnetta loses the ball at the top of the box, and the Whitecaps are quick to outlet and play a line splitting pass that leaves Brian Carroll chasing in open space. Keegan Rosenberry busts a lung to get back into the play, but he's in a tough starting position. This basically gives you a 4v3 with two Union players trying to catch up. Josh Yaro makes a mistake in reading the play and Kekuta Manneh scores.

More on Yaro in a moment, but first take a look at the turnover that started the sequence.

Look familiar? It's almost the same exact positioning that the Union had on the great goal that they scored. Barnetta is at the top of the box, Ilsinho is hovering to his right, and Herbers picks the same spot next to Jordan Harvey to try to get inside. This time, Barnetta loses the ball, and Alberg isn't in the play, so five Union players, plus a sixth who is out of picture, get stuck in the attacking third and can't recover in time.

Remember, Nogueira's departure means that Barnetta is the number eight in the Union formation. He doesn't have the freedom of movement that he had while playing in the ten spot, which now belongs to Alberg. Barnetta is absolutely encouraged to get into the box while playing as the eight, but he just has to be smart about it, since it leaves Carroll by himself in transitional scenarios like this one.

Alberg, meantime, looks to be on the left flank in this sequence and isn't really part of the attack or the counter.

As for Yaro, he's hung out to dry against Manneh, who is one of the fastest players in the league. The rookie takes a quick step, but realizes he won't reach the ball and ends up back pedaling. Instead of making a play on the ball, he takes a stab and Manneh easily rounds him.

Yaro was good enough to stick around and take questions after the game. He admitted his disappointing on this play and explained that it was a matter of judgment, and not an issue of keeping up with Manneh's speed.

"Yea, I definitely thought I was going to (reach it), then I missed it," said Yaro. "It's decision making. I don't want to go down and maybe foul him because I thought I was the last guy. Early in the game I didn't want to take a red card and hurt my team. It was judgment, and that's part of playing. You mistakes that cause a goal like that. It's not great, but there's nothing I can do about it now. I just have to let it go and move on."

His movement was much better in this game. He's starting to learn that spacing and holdup play are two of the more important aspects of playing as a lone striker.

It's not always going to be about making that back shoulder run or trying to find gaps in the defense. Sometimes it's about the center forward helping the midfielders, and not the other way around.

He plays a role in the first goal with that nifty inside move to get past Matias Laba.

The issue with Ilsinho is that the end product just seems to be missing right now. He's always in good spots and he's always capable of pulling off something incredible, but he's not impacting the score sheet. He has zero goals and one assist in 500+ minutes, which is the same exact contribution as Warren Creavalle, Ray Gaddis, and Leo Fernandes.

Excellent on the buildup play and the goal, he really looks like a true “second striker” out there. His ability to get into good positions and get off high-percentage shots makes him indispensable at this point. He's tried 13 (!) shots in the last two games. Some players don't even take 13 shots in an entire season.

The issue with Roland is that his inclusion unbalances the team. Other guys are going to have to recognize their defensive roles, because while Alberg does get back on occasion, he doesn't do it like Barnetta did at the number ten spot.

Put in a hard shift without much end product, though he somehow earned an assist on the first Union goal.

Seba's touch let him down at times on Saturday night, and he does look a bit out of place surrounded by all of those skilled attacking players. Still, his commitment to team defense is unmatched, and that's why he keeps earning minutes for Jim Curtin.

He had a golden chance within four minutes, but couldn't shove the ball through a David Ousted and Jordan Harvey sandwich.

Later, he was the facilitator on the opening goal, but also had the turnover that lead to that Vancouver counterattack.

What do you do if you're Jim Curtin? You've got two excellent choices at the number ten position in Barnetta and Alberg. You can't play both guys at the same spot. Someone has to be deeper, or in a wide position, or on the bench, right?

The best case scenario is that Barnetta learns the defensive nuances of his new role and restores some balance to the shape.

Carroll played a really nice game. He was smart in his decision making, smooth in his passing, and didn't allow himself to get into any situations that could exacerbate his lack of foot speed.

Yes, he couldn't do much on the Manneh goal, but it's not his fault that he was left on an island by his teammates.

He was rightfully applauded for his full-sprint effort in breaking up a Vancouver counter around the 39th minute of play.

Fabinho was incredibly composed on the ball and just looked really confident out there. This was one of his better games in a Union shirt.

I don't think he bears any responsibility for any of the goals. For the most part, he played his typical, no-nonsense defensive game.

Offensively, he actually had two great looks in this game. The first was a lunging effort on a Barnetta restart that maybe he could have done better on. The ball ended up taking a bounce before being punched away. Towards the end of the game, he found himself in on goal after a recycled set piece and appeared to toe poke and/or shank a shot well wide of goal.

You don't expect a center back to bury those chances, but Marquez might have found himself on the score sheet with just a bit more sharpness.

What can you say about the second goal?

Yaro is a rookie and he'll work out the kinks. In his words, the inability to make a play on the ball was a matter of “judgment”, not an issue of keeping up with the speed of Manneh. I believe him, because we've seen on other occasions how he's able to put out fires with his athleticism.

His biggest contribution to this game might have been the long throw, which actually lead to two very good scoring chances.

As a right back with innate offensive skills, Keegan looks much sharper when Ilsinho plays in front of him. He isn't going to get as much defensive help from the Brazilian as he does from Sebastien Le Toux, but the combination play and clearing of flank space allows him to get higher and into more dangerous positions. He was definitely more threatening in this game.

It looks like Andre is going through a bit of a post-Copa hangover, but his teammates are right; they need to start bailing him out.

He made a mistake on the first goal. The second goal goes in off the post. The third goal takes a deflection. That's a frustrating night for any goalkeeper, let alone one who deserves to be in the all-star game.

He had a great chance to equalize in the 72nd minute but ripped a side volley over the bar.

Later, he got his goal by finishing a set piece play through veteran play recognition and positioning.

Not much from Restrepo in a brief cameo, who had one decent run and cross down the right flank. I'm not sure what he brings as a two-way player, but I like his natural winger skill-set.

Denied a goal after heading Le Toux's set piece off the post.

Tim Parker may have got away with a yellow card on that clash of heads with Herbers. Otherwise, he probably missed Le Toux's handball but correctly waved off two Union shouts for penalty kicks.