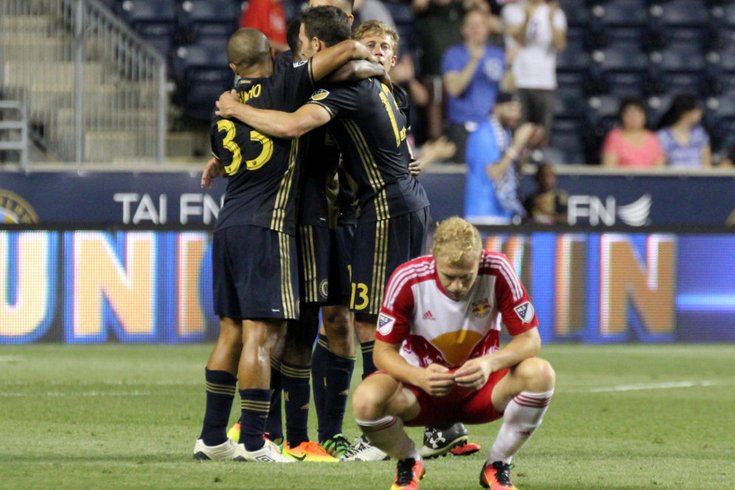 Chris Pontius scored a brace in the Union's 2-1, comeback win against New York in the U.S. Open Cup on Wednesday night.

It wouldn't be a U.S. Open Cup game without some sort of memorable insanity.

This one featured a come-from-behind Union win and the ejection of two coaches, one who kicked a soccer ball onto the field, and the other who grabbed two more balls, spiked them in front of the Union bench, then exited the field to a chorus of boos and expletives.

Jesse Marsch was right to be upset, but more on that later.

“A tale of two halves” is a tired cliché, but it couldn't be more true to describe this game.

The Union were out-shot 13-1 in the worst 45 they've played since the season opener in Dallas. Ilsinho was off the pace, Tranquillo Barnetta was in the wrong positions, and Roland Alberg was wasting time yelling at the referee.

They looked like England at Euro 2016, which is to say that they were insipid and uninspired.

The second half, then, saw the Union play a lot more like Iceland. The urgency reappeared. They started to win their challenges. The heart and desire was evident and they played like a team.

Two gashing movements up the right flank put the Union in front, and the defense clamped down for a deserved 2-1 win.

Got me under pressure

New York is probably the best pressing team in Major League Soccer, and that's why the Union struggled in the first half.

To complicate the matter, Philly is learning how to play without Vincent Nogueira, who had a pressure-breaking skill-set. He could drop deep to get on the ball. He was very good at switching fields. He had the mental celerity to recognize opposition movement.

In the first half, Tranquillo Barnetta just wasn't getting on the ball enough to help alleviate that pressure. Warren Creavalle was often left ito work with the back line on cycling the ball left and right, and even when the team tried to go direct, they weren't winning any aerial duels with Sebastien Le Toux getting sandwiched between Aurelien Collin and Ronald Zubar.

This passage is a good example of the first half struggles.

In this case, the Union try to get the ball inside to Creavalle, who is quickly closed down. Josh Yaro cycles it to Richie Marquez, who thumps a ball up the field. Collin cushions a header for Connor Lade, and New York regains possession.

In this one, the Union regain possession and roll the ball to Marquez. He plays Fabinho on the left, who doesn't have any options. The ball goes back to Marquez, who is closed down by Bradley Wright-Phillips. Richie hoofs one up the field and out of play.

It's hard to pick out Creavalle and Barnetta in this sequence. Pontius is covered and pointing for Fabinho to play the ball backward. Marquez is bracketed and doesn't have anywhere else to go. In the end, they give possession right back to the opponent.

For whatever reason, Jim Curtin seems to do his best coaching during the Open Cup.

In the second half, he instructed his players to break pressure by moving the ball sideways instead of vertically.

Here's the explanation from the coach himself:

"The biggest thing in what the Red Bulls were very good at, is all ten of their field players will be in literally a 30x30 segment of the field, and they press in such a way that they bait you into playing passes," Curtin said. "If you try to dribble out or try to beat one guy, you’re going to get your pocket picked by the next guy. They have a good way of squeezing you on one side. I think it started when Chris Pontius plays the one left-footed ball, almost blind where you just clip it to the other side because there’s literally no one there."

When Curtin uses the word "blind," he's talking about a blind switch, where you feel the opposition collapsing and whip a ball to the other side of the field to alleviate pressure.

This is the play that Curtin is talking about in that quote above:

You can see Chris Pontius first play a pass for Yaro that doesn't come off, and forces the rookie to chase. But when Pontius gets the ball back, he senses pressure on his back and plays a really nice, "blind" left footed pass to pick out Fabinho and break the pressure by going side-to-side instead of vertically.

"We talked about that (blind switch) at halftime," Curtin continued. "Guys executed. We did it about five or six times, and what that does is that their whole group now has to run 70 or 80 yards and now there are holes that start to open up. When Ilsinho and Alberg can find holes, it’s dangerous. I think in the first half it was too much just direct long-ball, where we’re not even giving our guys a chance to move our line, it was just straight out of bounds and then we’re in a cat-and-mouse game, and they have a good team. They’re a very good team, I think that was probably the biggest adjustment; the confidence to just almost hit a blind ball to our outside backs to give our offense to that side of the field. It lets us breathe and gives us everyone a break."

In addition to that blind ball, the Union just did better in tight spaces in the second half.

The buildup on the equalizer starts with a nifty triangle between Yaro, Barnetta, and Rosenberry. The right back outlets smartly for Le Toux, who then hustles to get back into the play and free up space for Ilsinho.

When Sebastien played as a lone striker in 2011, the Union were a more vertical team. They would get Roger Torres and Mike Farfan on the ball and boot it into space for Le Toux to chase, which really did work for a time.

Seba has never been the guy to win a header, or hold the ball up, or do any of those center forward-type of things.

But the one instance in which it worked perfectly was the first Union goal, which you saw above. By pulling wide to the touchline, he brilliantly helps Rosenberry relieve pressure. Then, Le Toux continues forward with this little serpentine drag run, which pulls Ronald Zubar diagonally and opens up a gap for Ilsinho to roll the ball through.

He was really, really off the pace to start the game, beginning with that early sequence where he found himself at the edge of the box and just didn't know what to do with the ball.

Later, he had a bad turnover in the middle of the field that led to a half-chance at the other end.

But his second half performance tells me a lot about what type of player he is. A lot of guys would come out in the same funk and then exit the field around the 60th minute. Ilsinho pressed with his team, made smart choices with the ball, and just looked more assertive overall.

The tricks and flicks and nutmegs are great, but two assists in six minutes is even better.

I think he was somewhat marginalized in the first half because Barnetta was playing higher up the field and crowding his space. Plus, it's not like the Union were getting much of the ball in advanced positions anyway.

Later, he started to get on the ball more and had some nice combinations outside of the penalty area.

He got a bit distracted with the fouls he was receiving, which maybe hurt his rhythm. Mentally, he can't let that stuff bother him. Now that defenders know he's a dangerous goal-scorer, they will start to be more physical and edgy.

In addition to two brilliant finishes, he was one of maybe three players who actually showed up in the first half.

It feels like the Union always get consistent, two-way performances from Pontius.

His spacing and movement and press recognition were poor in the first half.

However, much credit to 'Quillo in the second half. His starting positions were excellent. His vision and decision making were exponentially better. He played like a true number eight and his effort on the second goal should go in the Union's 2016 highlight reel.

Creavalle was a bit shaky in the first half when the burden of breaking the pressure was put on his shoulders. He's better when he's the one doing the pressing and the challenging.

Like most of the starting eleven, he was so much better in the second half. The Union's ability to relieve pressure allowed him more freedom and allowed him to settle in rather comfortably.

His best play was the tackle he won on Mike Grella inside the box after the winger had made a nice cut to push into a dangerous chunk of space.

Most of the Union attack came down the other side of the field, but Fabinho had himself another solid two-way game in this one. He was one of the two or three guys that played well in the first half.

Marquez wasn't happy with the goal that he gave up, and that's just the kind of person he is. The Union could go out and win 15 to one, but Marquez would still talk to you post-game about how disappointed he was to concede.

That's the kind of guy you want on your team.

That goal aside, he was strong in other areas. He had a big block early in the game, then had another massive tackle to keep Wright-Phillips off the board in the second half,

Richie to the rescue! 🙏 pic.twitter.com/G4KpLoHVz2

Smart and safe, he made all of the plays that he needed to make.

He didn't have it in the first half, but really turned things around in the second half, pressing smartly and getting forward into the attack.

On the first goal, he makes himself available for Barnetta, then outlets perfectly to Le Toux on the touchline. You're not going to find many rookie right backs who feel comfortable using their weak foot to push a one-touch pass about 15 yards up the flank.

Three days after making his first big mistake of the season, Blake looked like his normal self in this game.

He came in to play center forward, which surprised me and probably everybody in the stadium.

But he did well in that spot and tried to hold the ball up and facilitate for his teammates. It's not his best position on the field, but he did some nice things in a short-handed situation.

Mop up duty for Carroll, who came in at the six and allowed Creavalle to push into the eight spot for the final 15 minutes.

I want to see more of him, but who comes off the field?

He didn't use his cards early and seemed to favor the Union in the second half. Jesse Marsch was right to be upset about those calls going against his team. The whistle on Wright-Phillips that caused Marsch to go bonkers was a bad decision.

The Union academy and Bethlehem Steel coach did a great job doing color commentary for the web stream. Anybody can put on a head set and say, "that's good stuff from Chris Pontius!". Cook, however, did really well to explain the New York press and the tactical nuances of the game.