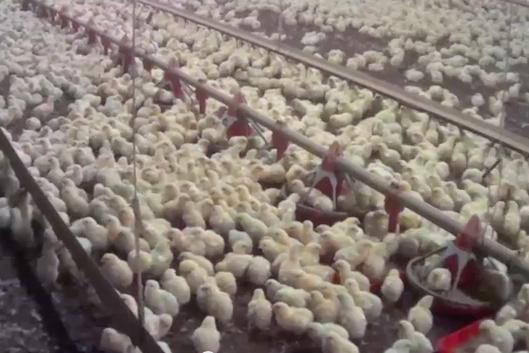 Video footage of alleged abuse at McGinnis Farms in Delaware.

The animal rights group Mercy for Animals has released video footage of alleged abuse at a Delaware farm.

The video, taken as part of an undercover investigation, shows chickens allegedly being abused at McGinnis Farms in Dagsboro, Delaware. McGinnis is a contract farm with Tyson Foods, NBC10 reports.

An MFA spokesperson says the video shows workers breaking the animals’ necks and cramming hundreds of thousands of birds into “filthy, windowless sheds” where they are “forced to live for weeks in their own waste and toxic ammonia fumes.” The group also accuses the workers of throwing the chickens to the ground from transport crates causing them to suffer broken bones and other injuries.

“Tyson Foods is literally torturing chickens to death,” MFA’s president, Nathan Runkle, told NBC10. “They are crammed into filthy, windowless sheds, thrown, kicked, and brutalized by careless workers, and bred to grow so fast they suffer from painful leg deformities and heart attacks. This is sickening animal abuse no company with morals should support. Tyson Foods has not only the power, but also the ethical responsibility to end the worst forms of cruelty to animals in its supply chain.”

A Tyson Foods official released the following statement to NBC10:

Animal well-being is a top priority for us. We do not tolerate improper animal treatment and take claims of animal abuse very seriously.

Proper animal handling is extremely important to us and is why we have programs and policies in place to protect the health and well-being of all our animals. This includes the Tyson FarmCheck™ program that involves third-party auditors who check on the farm for such things as animal access to food and water, human-animal interaction and worker training.

See the video below. Note: Some of the footage is disturbing. View at your own discretion.