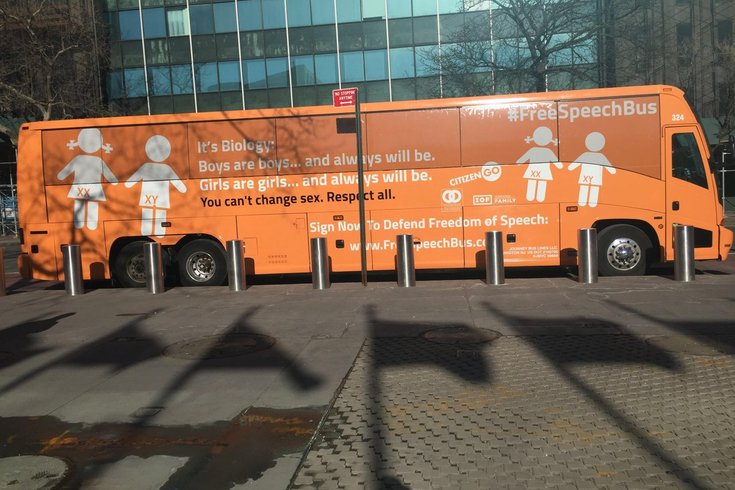 This anti-transgender bus is coming to Philadelphia.

A self-proclaimed "free speech" bus tour that opposes the rights of transgender people will be stopping in a number of East Coast cities, including Philadelphia.

The tour is being organized by several groups, including an online petition website called CitizenGO, which aims to "defend and promote life, family, and liberty."

The page for the bus tour asks those who "agree with the biological reality that boys are boys and girls are girls" to sign a petition in support. The bright-orange bus has already been in New York City, where it was reportedly vandalized.

“[Conservatives] feel like they’re being silenced by a small but very loud group of people,” Gregory Mertz, U.S. director for CitizenGo, one of three organizations behind the campaign, said. “They’re trying to intimidate us — that’s not fair. That’s not American values.”

According to the website for the tour, the bus will be making its way to New Haven, Connecticut, over the weekend before stopping in Boston. It's scheduled to come to Philly on Wednesday, March 29.

In February, President Donald Trump decided not to challenge an injunction placed on an executive order, signed by his predecessor Barack Obama, forcing schools to allow transgender children to use bathrooms and facilities that correspond with their gender identities.

The decision essentially stripped the blanket protection for transgender children nationwide, but some municipalities (such as Philly) already have similar laws in place. Philadelphia Mayor Jim Kenney, a vocal advocate for LGBTQ rights, condemned Trump's decision, and the School District of Philadelphia said it would keep its protections in place anyway.