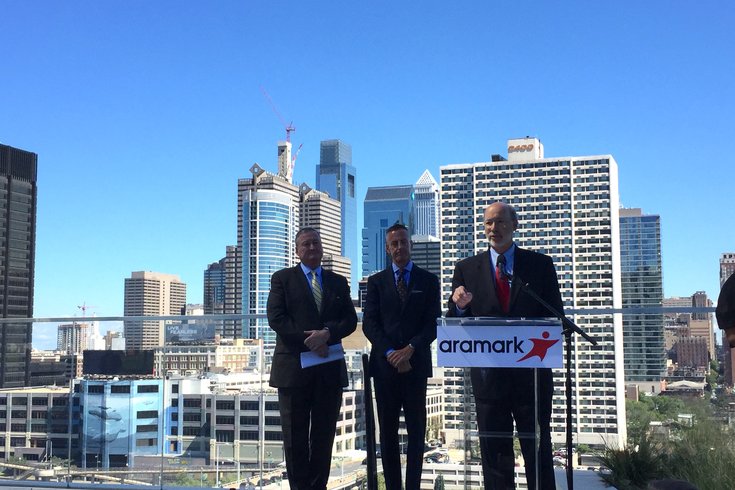 Gov. Tom Wolf, joined by Mayor Jim Kenney and Aramark CEO Eric Foss, celebrates Aramark's announcement that the company will be moving to a new headquarters at 2400 Market Street.

After initially considering leaving Philadelphia, Aramark announced it would indeed keep its headquarters in the City of Brotherly Love.

"We couldn't be more excited to make this announcement today," said a smiling Eric Foss, CEO of Aramark.

The news conference was held at Cira Green on the west side of the Schuylkill River, which afforded a clear view of the building. On the roof stood a billboard: Home Sweet Home. 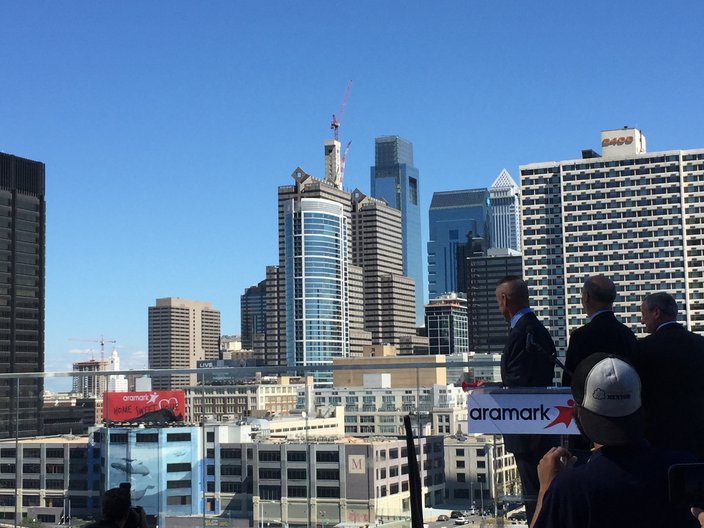 Eric Foss, Aramark CEO, as well as Pennsylvania Governor Tom Wolf and Mayor Jim Keney look on as Aramark unveils a 'Home Sweet Home' billboard on the location that will become the company's new headquarters.

"This really is a wonderful day for Philadelphia and all of its residents," said Kenney.

The existing, five-story structure at 2400 Market St. was built originally for the Hudson Motor Company in the 1920s.

Aramark said it will renovate the structure, adding four new floors for a total of 600,000 square foot structure with space to house about 1,200 employees. Aramark will occupy the top five floors, leaving the remaining floors available for potential retail and commercial tenants.

The lease for Aramark's current office space at 11th and Market streets expires in 2018. Earlier this year, the company reportedly expressed an interest in relocation outside of Philadelphia, instead of renewing the lease. In April, however, Aramark announced it intended to stay in the city.

Wolf noted that Aramark provides food, facility management and uniform services to a wide variety of global events, like the Super Bowl, World Cup and the 2016 Summer Olympics, as well as Phillies, Flyers, Sixers and Eagles games. 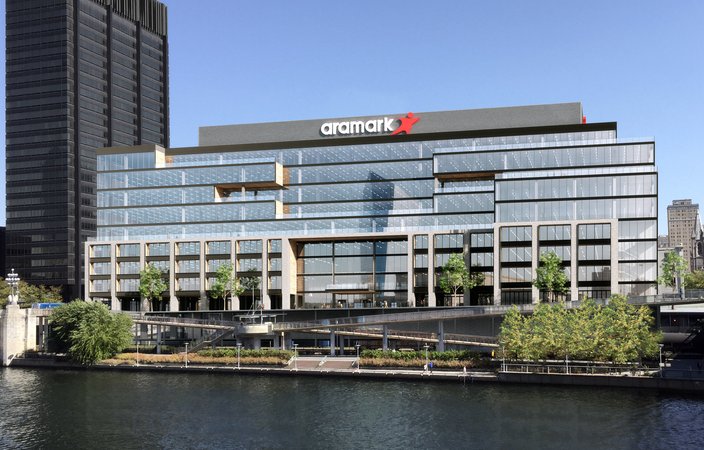 Courtesy of Aramark /for PhillyVoice

A design drawing of what the new Aramark building coming to the shores of the Schuylkill River will look like.

Noting that Aramark is a significant area employer, Wolf said the state provided about $20 million of incentives in the form of economic development and employee training grants to persuade Aramark to stay.

"Aramark is important because of what they do and what they contribute to the economy," the governor said.

Aramark, based in the Philadelphia area for more than 55 years, employs more than 265,000 people worldwide – more than 6,500 of them locally.

Foss said the headquarters will be built with a focus on "innovation, sustainability and green space."

Plans call for the new structure to include more than 8,000 square foot of outdoor terraces and include a promenade that will overlook to Schuylkill River Walk, which connects Chestnut and Walnut streets at the riverbank.

She did note that Aramark plans to move employees from its current offices at 1101 Market Street and 100 Penn Square East to the new building by the fall of 2018.