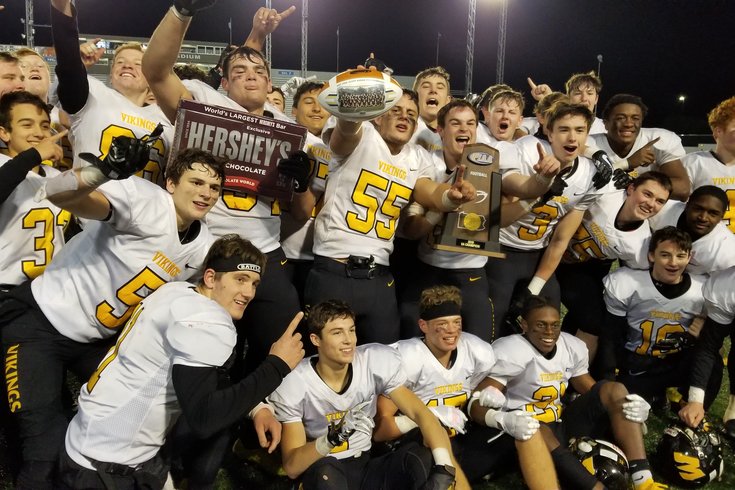 Members of the Archbishop Wood football team celebrate after winning the state title.

HERSHEY, Pa. — The journey began in the halls. It began finding a basketball player who had to be taught in August how to put on football pads. It moved forward with a player who suffered from a case of the fumbles — and was handpicked to make the play of the year — and with a diminutive kicker, who was a castoff from the soccer team, who put them here.

Archbishop Wood coach Kyle Adkins pieced it all together. A little here. A little there. And the steady build came with pinches of confidence mixed in.

Adkins had his moments, too, with the numbers down and the talent down, but the Wood attitude and commitment never changed.

Adkins wouldn’t let it slip. He took over for a man who once coached him to a state title, and he knew the warm feeling of winning football games in December.

It’s why there was no doubt, with :08 blinking on the clock in front of the them, and three yards to do something only they thought they could do—win the PIAA Class 5A state championship.

So, junior quarterback Max Keller stepped back, and Cardell Pigford slanted in, and through a flashing maze of arms and hands, Pigford fell in the end zone after hauling in the game-winning TD pass and clinching Wood’s sixth state title in a 19-15 classic over District 1 champion Cheltenham Friday night at Hersheypark Stadium.

The Vikings (11-3) suited 32 players Friday night, far below the numbers Wood used to get under previous head coach Steve Devlin. The talent, too, wasn’t burgeoning from the seams, as past Wood teams had.

Adkins put this together by grabbing players like 6-foot-6 starting defensive end Robert Jackson, whose only real experience with football was watching it on TV before this season. Adkins juggled a lineup that once had the explosive Pigford carrying the load of the offense, then was struck with a case of fumble-itis losing two fumbles in the District 12 5A championship.

Then there is the generously listed 5-foot-5 senior kicker Robert Meyer. All he did was kick a last-second, game-winning field goal to beat traditional Pittsburgh powerhouse Gateway in the state semifinals.

“When you look at us, how this all came together, I don’t even know what to say,” Wood team captain and Maxwell Club Mini-Max award winner Ryan Di Vergilis said. “We trust in our coaches. We have the best coaches in the state. When you look at from where we were last year, losing in the state semis, we knew we had to get back here.

“There was no doubt in any of us. This is the best team that I’ve ever been a part of.” 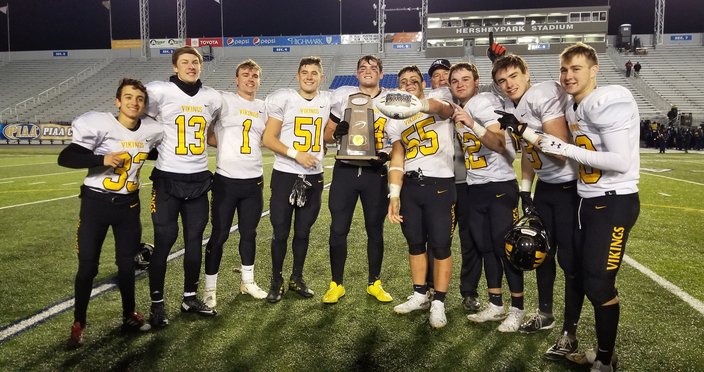 A month ago, junior Kaelin Costello wasn’t the featured back. He didn’t even start in the state semifinals against Gateway.

On Friday night, in the state finals, he had the kind of game he’ll remember forever. All the 5-foot-9, 165-pound tailback did was rush for a career-best 282 yards on 38 carries, averaging 7.4 yards each time he touched the ball.

He did it behind an undersized offensive line of tackles Dom D’Alessio and Dylan Logue, center Owen Coyle and guards Charley Mininger and Mason Yacovelli. It was Costello’s twisting, turning 17-yard run on a fourth-and-one from the 20 that set up the winning score.

“When you look at this, none of this adds up,” admitted Costello. “But you can’t measure heart and I think we have the biggest collection of that in the state, maybe the country. We heard the things about ‘Wood being down,’ and how we shouldn’t be here, how we weren’t like ‘past Wood teams.’

“Well, you can say we are now, because we just won a state championship, like they did. We’re so together, and that’s what makes us good. We don’t have the talent that past Wood teams had, and you know what, we know that.

“How cheesy that it sounds, hard work wins games.”

Pigford didn’t touch the ball during the final drive. A month ago, he was the Vikings’ featured back.

“I was waiting the whole game for this,” Pigford. “This means everything. We were doubted. The guys had faith in me. They called out my name, but I don’t shake my head and wonder why we’re state champions.