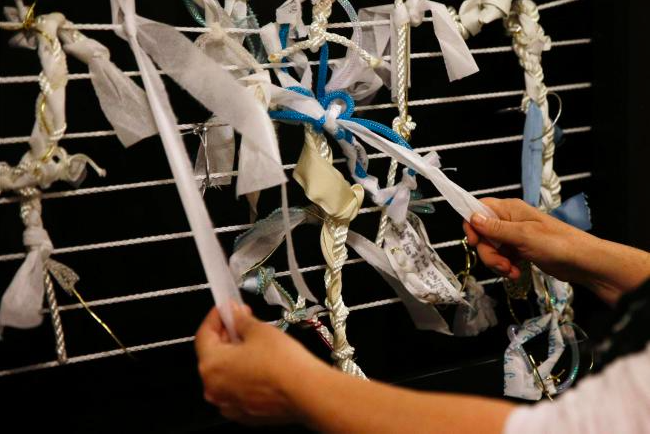 In this May 22, 2015 file photo, artist Meg Saligman shows knots tied to a mock-up of an art installation at her studio in Philadelphia. The installation is planned to be in the shape of a latticed grotto and will greet Pope Francis and millions of others when they travel to Philadelphia this fall. Visitors will be invited to leave their own problems behind in the form of knots affixed to its walls, or help others by loosening and removing a knot already in place.

Artists hoping to receive a visit from Pope Francis during the World Meeting of the Families next month are putting the finishing touches on a personally tailored exhibit that calls on the universality of human struggles across the globe.

The exhibit, which opens September 3 at the Philadelphia Museum of Art, collected more than 130,000 knots from around the world in reference to one of the pope's favorite paintings, "Mary, Undoer of Knots," which hangs at the St. Peter am Perlach church in Augsburg, Germany.

As a younger man in the 1980s, then-Rev. Jorge Mario Bergoglio, now Pope Francis, spotted the Baroque painting by Johann Georg Schmidtner and was enamored by its resonance with faith strengthened through adversity, US News reports.

Lead artist Meg Saligman, who gathered the knots from contributors around the world, described the project on her website as "a contemporary grotto that will feature thousands of suspended knots, representing the struggles of those affected by homelessness."

Some of the knots will include previously collected handwritten messages from Philadelphians depicting their personal stories and struggles. Those gathered for the Papal Mass will also be encouraged to tie knots of their own. If participants are feeling strong, they may untie a knot, to metaphorically carry someone else’s burden. The untying of knots represents a loosening of tension or pressure – a release. Through this shared action, the public collectively carries the weight of each other’s individual hardships. Burdens lighten as they become part of a communal experience, and I am hoping to facilitate this through a beautiful and meaningful communal work of public art. Those interacting with the installation will experience, through art, that a gesture of liberation for others will contribute to the liberation of themselves.

The installation received funding from the nonprofit homeless advocacy group Project Home, a cause exhibit organizers are hope will capture the attention of Pope Francis at some point during his visit on September 26-27.

The importance of the painting's message is clear to the pope, who brought back copies to Argentina and spawned a devotion to that spread to Brazil and elsewhere in South America.

For participating Philadelphians, the public art project has been an opportunity to share and voice their difficulties in a community-building format that inspires compassion and a celebration of faith.