Ask Hickey: Enough is enough with the ugly wallpaper

Ugh, wallpaper is the worst

Why do people use wallpaper? It’s so ugly. (Anonymous, via in-person conversation)

Listen, I get it. Sometimes a nice coat of paint is way more aesthetically pleasing than some tacky mess that gets glued atop perfectly acceptable walls. But not all of it is ugly! To wit:

In this office, wallpaper transports employees right to the #outdoors. Via @InteriorDesign https://t.co/v1dlXf3DWu pic.twitter.com/64mTqUBu9A

In any event, I have exactly zero interior-design sensibilities, so I headed out this week in pursuit of someone better versed in the world of wallpapering. That quest led me to Paul Sperling, proprietor of Colonial Wallcoverings in Queen Village.

In fact, I rudely interrupted his lunch on Monday to ask him a question that – real talk – disrespects his work of the past 35 some years. He kindly took a few minutes to offer a counterargument in defense of wallpaper.

“A life without wallpaper is an utter bore,” he told me, urging anyone who thinks differently to check out its use on movie sets. “It’s an art form now.”

As to that last statement, Sperling conceded that yes, in olden days, a lot of wallpaper was “hideous.” In fact, it left him disillusioned for many years. But that all changed five or six years ago when he “got excited” at the prospects of revived wallpaper respectability.

He chalked it up to the onslaught of home-decorating shows on HGTV and other networks that offered programming specifically geared toward residential artistry and utility.

“All different purposes in all different rooms,” he said directly in response to the posed question.

He meant the improved quality and artistry of wallpaper styles has opened a whole new world for professional and aspiring home-fashionistas. As for whether questions like yours harm wallpaper’s reputation, Sperling didn’t think so.

“If someone has a positive impression of wallpaper, they’re going to buy it anyway” when they come into the East Passyunk Avenue shop. “If they have a negative impression already, (we) have no chance.”

So, there you have it.

If you’re still on the fence, much has been written about the Painting vs. Wallpapering divide. You can check here, here, here, here and here for starters.

'Such a waste of money and space'

What’s the deal with the new installation at Gorgas Park in Roxborough? It says “learn Braille” and “learn Philadelphia’s neighborhoods,” but the neighborhoods are really just geographic regions of the city, and they’re not written in Braille, so only the children who can see are exposed to the absolute stupidity of our elected officials, distilled right down to a grade-school level. It is honestly such a waste of money and space. – (TG, via email)

Sorry for the delayed response to this, TG. Each time I drove up to Gorgas Park to check out what you were talking about, the displays weren’t there, as the city was fixing up the installation area just off the playground. 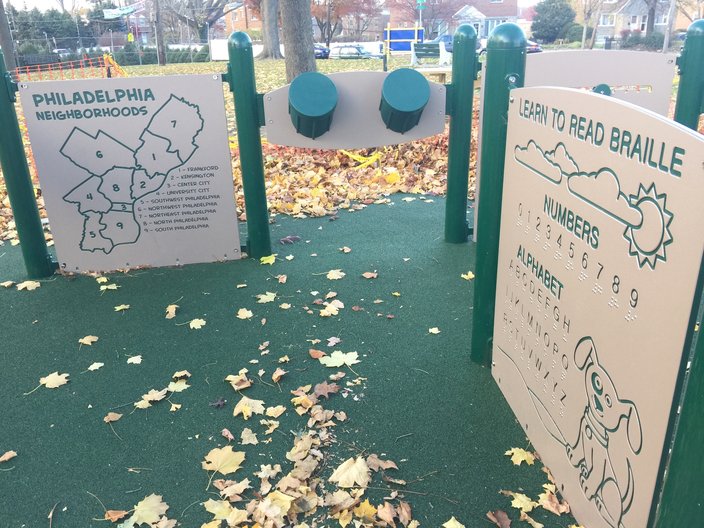 A new display in Roxborough's Gorgas Park invites children to learn Braille and discover Philadelphia's neighborhoods. At least one resident was upset that they didn't merge the two lessons.

This week, I finally saw what you were referring to. And, you’re right. There’s a “learn Braille” display and a learn “Philadelphia neighborhoods” display.

We’ll touch on the map aspect first. I’m OK with North, Northeast, Northwest and South Philadelphia each getting their own designations. Same with Center City and University City. These are all true-to-life and accurate representations of neighborhood-named sections of town.

Now, Frankford and Kensington each getting huge dabs on the map, well, that’s a bit off. Sure, Old City might be a bit too small to get top billing, but it’s worthy. Perhaps get Old City on there and a River Wards type thing, I don’t know. Something about those two 'hoods getting what others didn’t doesn’t sit right with me.

As for your concerns about Braille on the neighborhood map – a tricky proposition for which advancements are being made – I reached out to Josh Cohen, deputy chief of staff for City Councilman Curtis Jones Jr., whose district contains Gorgas Park.

He then reached out to the Department of Parks and Recreation, which is overseeing the Gorgas improvements, notably the "installation that is an adaptive playground for children with disabilities, one of the first on a city playground."

“It was designed this way,” he said. “Only the panel about Braille has Braille on it.”

So, there you have it, TG: The entire exhibit wasn’t created with sight impairments in mind; just the one that teaches numbers and letters was.

Also, it's a fine addition to the play area.

Is it true the “merkin” was invented in Philadelphia, and the first of them were made of beaver? Happy Thanksgiving. (Jeffrey H., via email)

I don’t want to know what Thanksgiving-table conversation left you wondering about Philadelphia’s role in the Merkin Life. However, I certainly wish you and yours a retroactive Happy Turkey Day, as well.

Now, onto your query.

First, we’ll need to catch everyone up with basic details pertaining to the questions that you asked.

American moviegoers and television viewers are no strangers to the merkin, as it has gotten screen time in such films as “The Reader,” “Harold & Kumar Escape from Guantanamo Bay” and “Scary Movie.” (For the merkin’s Hollywood history, you might consult this story from Grantland.)

Per “The Oxford Companion to the Body,” its roots can be traced back to the 15th century.

Philadelphia wasn’t exactly a thing back then. Hell, Christopher Columbus wouldn’t even show up for decades. However, the northeastern portions of North America were home to Algonquin and Iroquian cultures.

Now, I couldn’t find any historical record of Native Americans in the region now called the Delaware Valley trapping beavers (which are on the rise in the region of late) so their hair could be used in this capacity.

That doesn’t mean they didn’t do so. That merely means there is no record of it happening as best I can tell.

Based on an investigation into your question, I have to say, “No, it is not true the merkin was invented in Philadelphia. Nor is it true that the first merkin in the region was made of beaver.”