Today's roundup features questions about protecting your family from the risk of fire, Baltimore, venereal disease and how best to name baby gorillas.

Do you have something to ask? Well, send me your questions through Facebook, Twitter or email (with "Ask Hickey" in the subject line). Your anonymity is guaranteed, if that’s how you want it, so feel free to send them via private/direct message.

A Spouse on Fire

I recently moved into a new home with very high ceilings. The smoke detectors are out of reach and I have no way of testing the batteries in them. For all I know, they are non-operational. My wife says we should buy a ladder and check, but I think she's being paranoid, and smoke detectors aren't all that important. Who is right?

The first thing I did after reading your question, R.W., was pray for your wife.

Ensuring that you not only have smoke detectors in your home, but regularly check the batteries to ensure they’re active, can be the difference between life and death.

Don’t just take my word for it. Reputable agencies including the American Red Cross urge woke humans to test the batteries when they turn their clocks ahead for Daylight Savings Time. You don’t seem very woke. Work on that.

Also, Private I. Plug has produced a PSA regarding this matter that you would be well-served to watch as, again, this is a matter of utmost importance:

Fire safety doesn’t begin and end with checking your smoke detector batteries, either. Having an escape plan in case of emergency is also a major key:

To further hammer this urgent point home, I contacted Lt. Andrew Brown, executive assistant to the Philadelphia Fire Department’s deputy commissioner of technical services. I will include his response verbatim below:

Thank you for bringing this question to me. Below are some facts from the National Fire Prevention Association:

Three of every five home fire deaths resulted from fires in homes with no smoke alarms (38 percent) or no working smoke alarms (21 percent).

No smoke alarms were present in almost two out of every five (38 percent) home fire deaths.

This isn’t about scare statistics, though. The threat is real. Brown continued:

The fact is that smoke alarms are not only required by law, they are also a key part of your home safety plan along with practicing your home escape plan (with meeting place) and practicing basic fire safety.

My response to the specific question is that the wife is correct. The smoke alarms should first be inspected to determine if they have expired. (Yes, they expire!)

There should be an expiration date on the detector. If the device is over 10 years old, it needs to be replaced.

The smoke alarms should be tested regularly, at least once a month.

In the case of a high ceiling, if using a ladder is not a safe option, a long tool such as a broom handle can work well for pushing the test button.

So, there you have it, R.W. You are wrong. Your wife is right, and she is in danger. Please get a ladder, check the batteries and report back with details of how it went so the #AskHickey readership knows you and your family are OK. 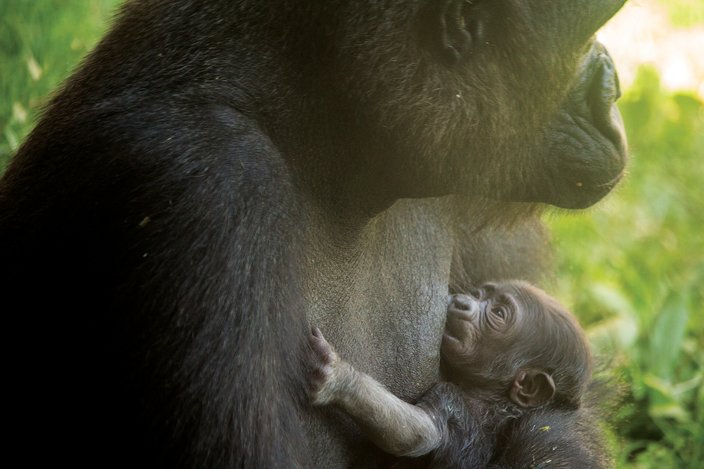 Does the name Mummers have a nice ring to it re: the baby gorilla at the Philly Zoo?

No. The name “Mummers” doesn’t have a nice ring to it re: the baby gorilla at the Philly Zoo.

Why would you want to saddle an innocent newborn gorilla with the sins of animalistic humans? What has it ever done to deserve being anything but the cutest, most adorable new Philadelphian? Are you some sort of psychopath?

The baby gorilla didn't mock Caitlyn Jenner or yell hate-fueled slurs at people on the other side of the protective glass at the gorilla house.

The baby gorilla deserves our love and support in these formative years.

It's wrong that the zoo limited the name choices to Amani, Isangi, Mapendo and Muyisa, even if a charity benefitted after they settled on the first one earlier this week. It's another case of the nanny state stepping in and telling us how to live our lives, this time preventing a ballot-box stuffing tribute to a fallen hero. If they limited the choices to avert your name suggestion, that would have been fine. But they didn't. We all know they didn't.

Should we get some sort of decontamination because we spent a night in Baltimore?

I don’t know what you two were up to down there in the Charm City, but everybody knows that Baltimore is the syphilis capital of the universe.

Hopefully, you weren’t impacted, but you may not know yet, as it takes a couple weeks for the tests to come back, apparently.

Should you test positive for the Baltimore strain, though, don’t go all "Sum of All Fears" on the town. I know a couple disease-free people who live there, and they are decent, honest folks.

Instead, get your hands on the right antibiotics and — should you ever return to Baltimore — remember to take a Silkwood shower (NSFW-ish) immediately upon your return.

Next week in #AskHickey: “What is the value of a college education, really?” and more!