Ask Hickey: How old's too old to go on a bar crawl? 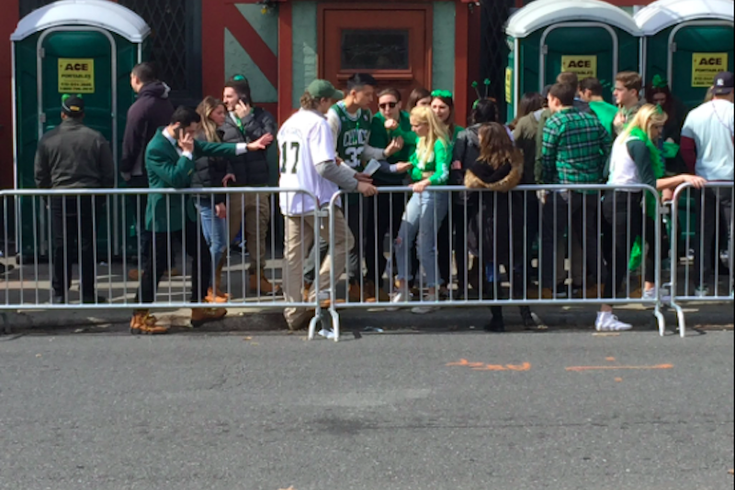 At what age are you too old to take part in an all-day bar crawl celebrating Saint Patrick's Day? – Jason, via Facebook inbox

Thanks for asking this very important question, Jason. It is a timely one, as well, considering me and a bunch of other fortysomethings will be doing just that on Saturday in Philadelphia’s finest neighborhood, East Falls.

It was around noon. I’d taken my son downtown for his last day of the indoor-soccer season. (Fun fact: He closed out the season with hat tricks each of the final two games.)

Anyway, I walked outside Greenfield Elementary, looked across 23rd Street and saw this:

It sent a chill down my spine, that scene did. The chill spoke to me. It said, “Yo, Brian, you are waaaaaaay too old to deal with that kind of s---.”

And it was right.

Organized, mass bar crawls are not for the mature of heart. Granted, I’m not the most mature person in the world but, at 43, I’m way too mature to stand in line outside a bar at noon, banging on Port-o-Pots for comedic effect.

What I’m not too old to do, however, is pony up a few bucks and roam my neighborhood with friends, sipping and grubbing at all the watering-hole offerings located within a square mile or so.

Fifty is too old for a multi-stop bender IMHO.

What was on “Fox and Friends” Tuesday morning? – AH, via Facebook

That is not a program I watch regularly, but thanks to your question, I had to.

Listen, our political world is as bubbled as it’s ever been before. We watch what bolsters our worldview; we ignore – or get into social-media beefs over – opinions that don’t jive with our own.

This isn’t good, but I can’t play the holier-than-thou card since I, too, have fallen into that trap of late.

My aversion to "Fox and Friends" and the like isn’t about a need for insulation; it’s about my position that I already know what the other philosophical side is saying and I don’t want to get into screaming matches. Also, we're too busy getting the lad ready for school and heading out the door for work to watch.

That’s why I went out of my way in an attempt to avoid seeing the president’s Tweets (though the mainstream media’s horrible habit of taking those 140-character rants and turning them into instant news stories is lazy, and makes it impossible to avoid it altogether). So thanks for that, media, of which I’m a part.

On to your question. "Fox and Friends" was (were?) talking about how:

-- the need to probe leaks from the White House,

-- former President Obama is facing his "own personal Watergate" courtesy of his successor's baseless claims (my second to last word, not theirs),

-- the Affordable Care Act replacement’s announcement complete with an interview with Sen. Rand Paul talking about “the liberal press,”

-- Casey “Tot Mom” Anthony returning to the limelight by saying like, she really doesn't, like, remember all that much from the night her young daughter was killed and, this: 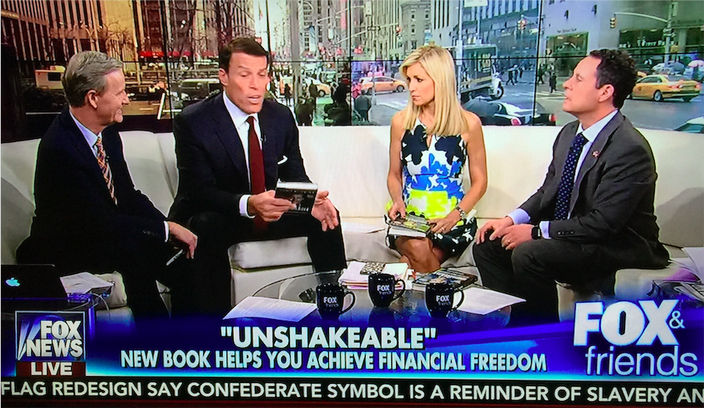 A photograph of what was on my television around 9 a.m. Tuesday.

There was also a segment about this week’s “Day Without a Woman” national day of protest.

In discussing that topic, they brought conservative-hivemind stirrer Laura Ingraham, who complained that “people can’t get away from politics for a minutes,” that “the left has burrowed into academic establishment” and – paraphrased here – how it’s silly for people to stand up for their opinions that don’t jive with hers.

Then, she asked a fitting question: “How about a day without critical thinking?”

Critically consider that, "Fox and Friends," and AH, and everybody else out there, myself included.

With each passing day, compromise and insightful conversations seem to be a relic of the past, and that is so far from a good thing, it's nothing short of dangerous.

Do you accept this prize?

I've got two tickets to paradise. Will you a) pack your bag as we leave tonight or b) accept the ticket but exchange it? – Londo, via Twitter

I appreciate the offer, Londo, but I’m exchanging that ticket. Why – you ask – would I defer decision on such a kind proposition?

Because Wrigley Field is paradise, and the World Series Champion Chicago Cubs (that feels soooooo good to type) don’t have their first regular-season home game until April 10 vs. the Dodgers, and the Phils don’t arrive out at the friendly confines until May 1.

Also, daps for the Eddie Money reference. Dude was a boss.