Ask Hickey: Is it wrong to enjoy global warming's perks or nah?

Dancing and smiling as the world comes to an end

Is it to wrong to enjoy the local effects of global warming even if I know it is harmful overall? (Jim B., via Facebook)

This is a tough one, Jim.

Obviously, the world is slowly but surely coming to an end, a mass extinction hastened by the ignorance of those who refuse to admit (or play semantic games mitigating the fact) that global warming is a real thing that’s actually happening. Take solace in the fact that they’ll go the way of the dinosaurs, too!

Instead of the Statue of Liberty, an oil painting of Scott Pruitt’s moronic head will be sticking out of the sand on a Planet of the Apes beach.

That’s not what you asked, though, so let's move along.

You sent me this question on a 60-some degree day in early March. I was wearing shorts and a T-shirt outside when I read it. I was totally enjoying that day despite the looming end of humanity. In fact, I didn't even think that I might have to trap squirrels for sustenance once that day!

I answered this question on a 30-some degree day in mid-March. There is a winter coat on the back of my chair. I’ve been inside for an hour and I’m still cold. There’s supposed to be a snowstorm today (Tuesday), but we’ll all know whether THAT actually happens by the time this story runs.

If all goes according to weather-presenter script, kids won’t have had school, many of us would have worked from home and some will have taken some time to head out to the best sledding hill in Philly – “The Nuts,” off Warden Drive in East Falls – for some fun snow frolicking.

I mention all those things because, yes, global warming has offered some serious opportunities to have outdoor fun. Rather than cowering inside, it’s foolhardy not to take advantage of those chances.

That doesn’t mean you’re pretending climate change isn’t real; that’s what rich white folks who value profit over protecting the future do. That just means you're living life to the fullest while hopefully taking steps in your personal sphere to help Mother Earth.

So, yeah, enjoy the heck out of the local effects of global warming while you still can, Jim.

I know I sure will until the skies rain fireballs, talking locusts, blobfishes and Mini Cooper-sized hailstones down upon us.

A couple I know is having a baby. A joyous occasion, right? Except they couldn't seem more indifferent, scared, or all-around not ready, and not in a self-deprecating way.

I'm not a parent, so I don't know if I'm being judgmental (please let me know if I am!), but I know other friends feel straight up uncomfortable around them from how they speak and act about looming parenthood. They seem ill-prepared and clueless about parenting basics and it has some of us really sad and worried. They're a successful, worldly couple, and great friends, but this is like Lewis Hamilton is on molly in control of a backhoe.

So it's not like I'm asking for parenting advice, but how do I respond normally and politely around them when they say something super messed up about their imminent parenthood?

The details would enrage you. So, I'll spare you. – “Fearful for the Future,” via e-mail

Anytime I hear about friends having babies, it is a joyous occasion particularly for me, as a parent, who understands the joys inherent in raising a child along with a loving bride.

When I hearken back to those post-ultrasound pre-parenting days, I remember a time of great excitement tempered by a level of intimidation of not really knowing what life's about to become.

If they're being honest with themselves, nobody's really ready for their first child. It can be a scary proposition. At the same time, though, I've never met folks who treat that life-altering news with outward indifference.

That would scare me, too, as a friend of the couple who wants what's best for their offspring.

You are not wrong to be worried enough to send an anonymous note to a local dispenser of life advice.

Are you being judgmental because you're not a parent? Nah.

Your concerns seem to come from a kind corner of your heart where, in collusion with other worried friends, you just want what's best for everybody involved by year's end.

My hope is that their apparent indifference or ill-preparedness is just their way of shrugging it off publicly while, behind the scenes, they're totally reading up on all the (not really helpful but whatevs) parenting manuals, getting their nursery ready for the lass or lad and saving money for their child's educational and diaper needs.

How would I respond to the way they talk? Well, I'd fake-laugh along with them. Then, the smile would turn into a serious face as I eased questions in about where they plan to give birth, whether they've started household preparations for the arrival, and if they've picked out names and other baby-related things.

If they continue to act in a "meh" fashion, delicately ask them about it. Use a line like this: "Jeez, if I were having a baby, I'd be so frantic. How is it that you seem just so darn calm about everything?" Their response to that will offer some good metrics as to whether they'll ever be prepared.

Also, we should all send some thoughts and prayers in their direction. They're going to need 'em both.

In closing, here's a Will Smith song about parents and their level of understanding because, why not?

I work with a freak

Is it weird if I look at my phone while I'm peeing at the urinal? – Daniel Craig, via Twitter 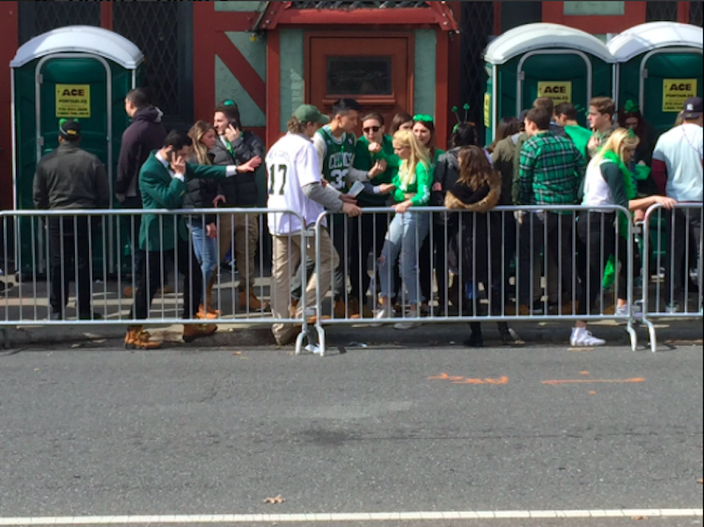 I’d like to revisit last week’s “Ask Hickey” column for a moment, if you don’t mind. The question presented was akin to the one above, and as I’d responded in the column, I would get back to you with an updated response after going on a bar crawl this weekend. To wit:

Well, Saturday’s experienced taught me – by Sunday morning – that 43 years old is too old to go on a bar crawl.

It was not easy, Sunday wasn’t.

I don’t wish it upon anybody.

That said, I’ll go on that bar crawl again next year, God willing, because what use is learning from past experiences? The world's melting like an M&M on a Tijuana sidewalk. Get the most out of it while we can.