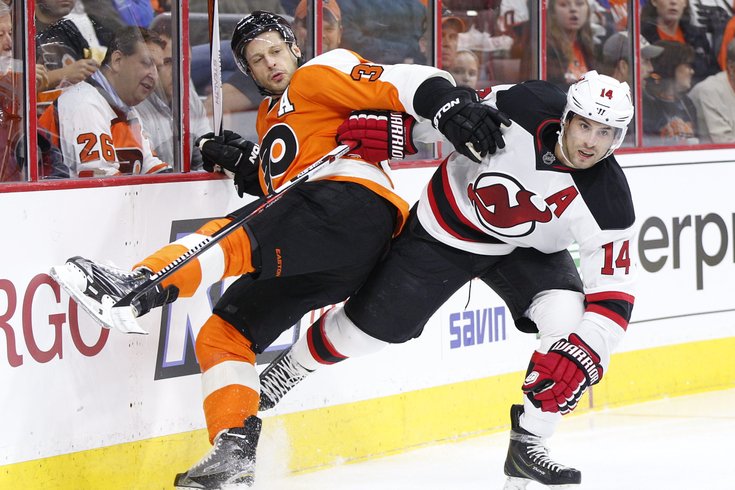 It's never fun losing to a rival, especially when the win allows that rival to climb past you in the standings. Even if it's early, which it is, the games count just as much now as they do in the final week of the season.

That's why Thursday's 4-1 loss to the New Jersey Devils -- one in which the Philadelphia Flyers (4-3-2) looked completely uninspired -- is both forgettable and potentially important at the same time. What happened between when the puck dropped and when the final horn sounded isn't all that important -- says the guys who wrote all about just that -- compared to the two points the Flyers surrendered the to a division rival on their home ice.

Here's what I saw in the loss:

•    The Flyers came out flat in the first period, much like they did against the Sabres on Tuesday. It was a bit unexpected considering the opponent -- the rival Devils -- but maybe that had to do with a less-than-packed Wells Fargo Center on "Halloween Night" at the arena.

Tonight is Halloween night. Some people dressed up as red, padded chairs.

Thanks to the Halloween images of the Flyers' faces during the intros on the Big Screen ... the Flyers look like zombies in first two shifts

The Flyers seemingly struggled to get up for lesser opponents last season, but to see them start so flat against New Jersey was not a good sign. Luckily, it didn't wind up hurting them.

•    The reason their slow start didn't hurt them had a lot to do with goalie Steve Mason, who stopped all 14 of the Devils' first-period shots. After they were penalized for having too many men on the ice, it seemed like the Devils were bound to score. But thanks to some quick reflexes from Mason — and later, the help of two posts — the Flyers were able to keep it knotted up at 0-0 midway through the first.

•    Speaking of Mason... For the second game in a row, he played well enough for the Flyers to come away with a win. At least on Tuesday they were able to get a point. Mason didn't stand a chance on two of the Devils goals, both scored by Travis Zajac. The first was a redirect by the Devils center, who was wide open on the doorstep. The other was on a Devils power play -- after yet another too-many-men penalty -- and was while he was wide open in the slot. Mason already made one of those saves tonight (see above) so you can't really fault him for that. And even on the other goal -- scored by Chazz Palmister Rafael Palmiero Kyle Palmieri -- Mason was facing a 1-on-1 after a turnover by Evgeny Medvedev. Tough night for Ma$e, who finished with 30 saves on 33 shots (NJ added a late empty net goal).

•    The Flyers did a much better job gaining, and maintaining, possession of the puck behind their own net against the Devils. I noticed in Tuesday's loss to the Sabres that they were having some trouble in this critical area of the ice. First, there was Claude Giroux’s turnover that led to the Sabres’ first goal. And there were a few others, including on in the third period in which the Flyers were just completely incapable of getting the puck and clearing the zone. By the time they did, their only option was to ice it. They looked improved in that regard on Thursday. That being said, they had a fair amount of neutral zone turnovers, like the aforementioned Medvedev giveaway, that led to chances for the Devils.

•    Yardley native -- and now Devils center -- Brian O’Neill grew up a Flyers fan. On Thursday night, the Germantown Academy alum played his first game against his hometown team after making his NHL debut for New Jersey earlier this month after being acquired from the Kings. He finished with a minus-one rating and two shots in 7:11 ice time.

"I'm sure it will be a little different,” O’Neill told NJ.com, which also pointed out that he’s the first Bucks County native to make it to the NFL. “I just get the same feeling every time you play in an NHL game. It's a really cool experience," O'Neill said. "If you're awestruck you're going to struggle, especially with a hometown thing. I think for my family it will be pretty meaningful to them."

More on him later…

•    Special teams was the difference. Heading into action Thursday night, the Flyers were 22nd in the NHL on the power play, scoring just 15.4 percent of the time and 24th in penalty kill at 77.4 percent. Against the Devils, they went 0-for-2 with the man advantage but allowed a pair of power play goals by the Devils, who came into the game ninth in the league on the PP at 22.6 percent.

After getting bailed out by Mason on their first two penalty kill attempts, the Flyers allowed the Devils to score on two of their next three power plays. And whenever you get called twice for having too many guys on the ice, it reflects poorly on your coach. I'm sure we'll be hearing from first-year coach Dave Hakstol after the game.

•    And finally, an update on the injury front. Goalie Michal Neuvirth, injured in last week's OT win over the Bruins, returned from IR Thursday and was back on the Flyers bench for their game against the Devils. Meanwhile, Vincent Lecavalier was in the lineup for the Flyers -- and on the ice for Luke Schenn's second period goal -- in place of injured forward Pierre-Eduoard Bellemare, who suffered a lower-body injury against the Sabres.

For Lecavalier, it was his first action of the season after being a healthy scratch in each of the Flyers first eight games this season -- and here's how captain Claude Giroux decided to welcome Vinny back.

After three straight home games, the Flyers head out on the road for five-straight. Their first stop is in Buffalo for a rematch with the Sabres (3-6-0), who beat them 4-3 in overtime here on Tuesday night. Then, it's off to Canada for four-straight games north of the border. Here's a look at their upcoming five-game road trip:

Their next home game will be against the Colorado Avalanche on Nov. 10 at 7 p.m.