Emmanuel Acho, who played two seasons in Philly, has been a driving force in discussions about race with the web series 'Uncomfortable Conversations with a Black Man' 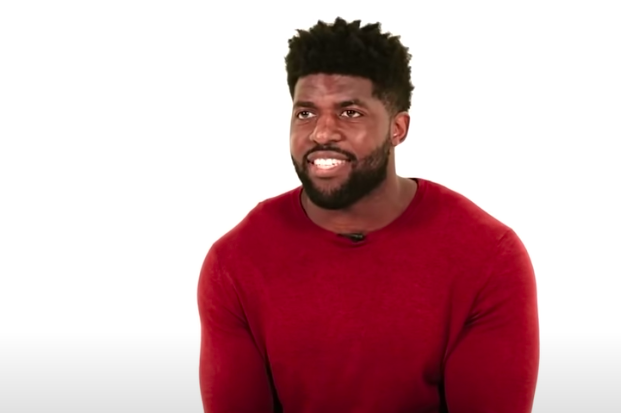 Emmanuel Acho, a former player for the Philadelphia Eagles, will host 'The Bachelor: After the Final Rose' episode in place of Chris Harrison. It airs at 10 p.m. March 15 after the 'The Bachelor' season finale.

Emmanuel Acho, a former Philadelphia Eagles' player, will help wrap up the current season of the "The Bachelor," filling in for Chris Harrison, who is not hosting the reality dating show amid controversy after he defended a contestant's prior racist behavior.

Acho will host the hourlong special "The Bachelor: After the Final Rose," that airs 10 p.m. March 15, immediately after the finale of Season 25 of the ABC series, which begins at 8 p.m. that same night.

The 30-year-old retired from professional football in 2016. Acho, a linebacker, had not played an NFL game since 2014, his second and final season with the Eagles. After being drafted by the Cleveland Browns in 2012, Acho played in 20 games for the team during the 2013 and 2014 seasons.

He has since worked as an analyst for ESPN and FOX Sports. More notably, in the aftermath of the killing of George Floyd, Acho created the YouTube series "Uncomfortable Conversations with a Black Man" that features frank conversations about race. He also has published a book by the same title.

For "After the Final Rose," Acho will moderate a conversation this season's bachelor, Matt James, discussing his final decision and where where is relationship with his chosen bachelorette stands now, along with other topics related to the show. The final three bachelorettes also will appear on the episode to talk about their experiences.

Acho announced on social media that he would host the episode, saying "Empathy is needed and change is coming."

IT’S OFFICIAL: I’ve accepted the Rose & am honored to be hosting the @bachelorabc After the Final Rose this year.

It’s been a pivotal season & this episode will be one of the most storied shows in its history. Empathy is needed and change is coming. See y’all then! 🌹 ❤️ pic.twitter.com/eWBXT6Kv6J

Harrison has hosted "The Bachelor" since the dating show's first season in 2002. Last month, he temporarily stepped down amid a controversy following his comments about, Racheal Kirkconnell, a contestant from the current season.

Photos surfaced of Kirkconnell, 24, attending an "Old South Antebellum" fraternity party while in college in 2018. The theme of the party is a reference to the time in U.S. history, prior to the Civil War, when slavery was legal in the southern states, like Georgia, where Kirkconnell attended college.

Harrison discussed the photos the show "Extra" in an interview with former "Bachelorette" Rachel Lindsay, and he defended Kirkconnell attending the party.

"Is it a good look in 2018 or is it not a good look in 2021? I don’t know, 50 million people did that in 2018? That was a type of party that a lot of people went to," said Harrison during the 15-minute interview, in which also said "I am not the woke police," and other comments many have interpreted as dismissive of racism.

Lindsay, who was the first Black "Bachelorette," suggested last week that Acho would make a good replacement host for Harrison. She also noted that Acho had been "very outspoken about racial injustice," according to People.

Acho's "Uncomfortable Conversations with a Black Man" video resonated with people during 2020's reckoning with racial justice. The 9-minute-long first video in the series has more than 2.2 million views on YouTube and more than 8.4 million on Twitter.

Dear white people,
For days you’ve asked me what you can do to help. I’ve finally found an answer.

Let your guard down and listen. pic.twitter.com/74SVv8XOqp

"The Bachelor: After the Final Rose," concludes James', who is the first Black man to be the "Bachelor."

During the remaining episodes of Season 25, Kirkconnell remains a contestant and since episode were filmed months in advance, Harrison is the host. Season 25 took place at the Nemacolin Woodlands Resort in Farmington, Pennsylvania, near Pittsburgh. It was shot from September to November 2020.