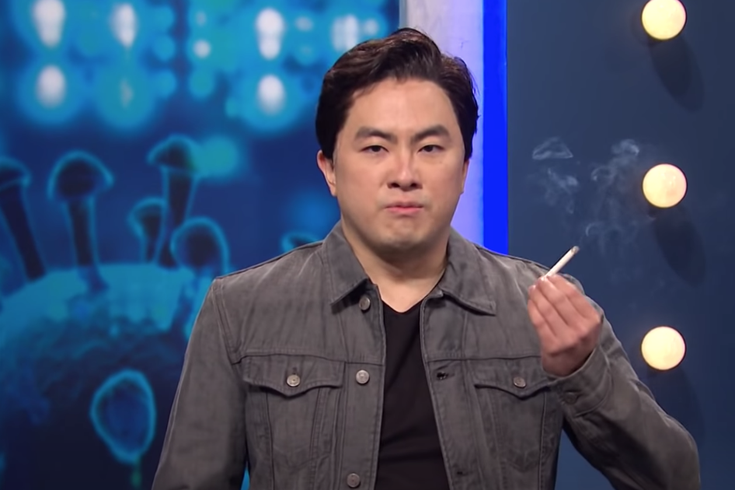 New Jersey was front and center on "Saturday Night Live" this week, and it started during the sketch comedy show's cold open on Saturday.

SNL's opening segment was a mock COVID-19 vaccine game show to jokingly find out who was actually eligible to be vaccinated right now.

The game show brings out a number of people who want to know if they can get a COVID-19 vaccine, including one individual named Ronald. Played by Bowen Yang, Ronald is described as a "proud" smoker from New Jersey.

"I'm Ronald and I'm from New Jersey and I love cigarettes," Yang says as he holds a cigarette in his hand.

Sensing that Yang's character is lying about his love for smoking, Davidson asks, "Are you just saying that because in New Jersey, they're giving the vaccines to smokers?"

"Whaaat?!," Yang's character says in a shocking tone. "I love smoking. I love the squishy part, the burning part, it's all my favorite," he continues unconvincingly.

Unable to maintain his cover, Yang's character starts coughing and says "Okay, this is terrible. I gotta get some water."

But the state has received criticism from many for prioritizing smokers over other groups in its COVID-19 vaccine distribution plan. Critics believe that those who chose to take up smoking should not be rewarded for partaking in the unhealthy habit.

However, the state has defended its decision to prioritize smokers for available COVID-19 vaccines. CDC guidelines also recommend that these individuals be prioritized for available vaccine doses, citing the increased risk of smokers experiencing severe COVID-19 symptoms.

"I get it, I understand the optics here, and that attacking folks who took up the habit of smoking and are now addicted may be politically expedient," Gov. Phil Murphy said in January.

"But at this time we are stuck in a position where we have to prioritize limited federally-distributed vaccine doses based on medical fact and not on political want. We need to save lives. And we need to protect our hospitals, by the way, from a patient surge."

SNL also took a dig at Johnson & Johnson's COVID-19 vaccine receiving an emergency use authorization from the FDA on Saturday. Michael Che, co-host of the "Weekend Update" segment, jokingly said that the New Jersey-based company "will now pair the vaccine with needles from New Jersey's No. 1 syringe supplier, the beach."

Musician Nick Jonas, a New Jersey native, was the show's host and musical guest this week. "Saturday Night Live" episodes can be watched in their entirety on YouTube and Peacock, NBCUniversal's streaming service.