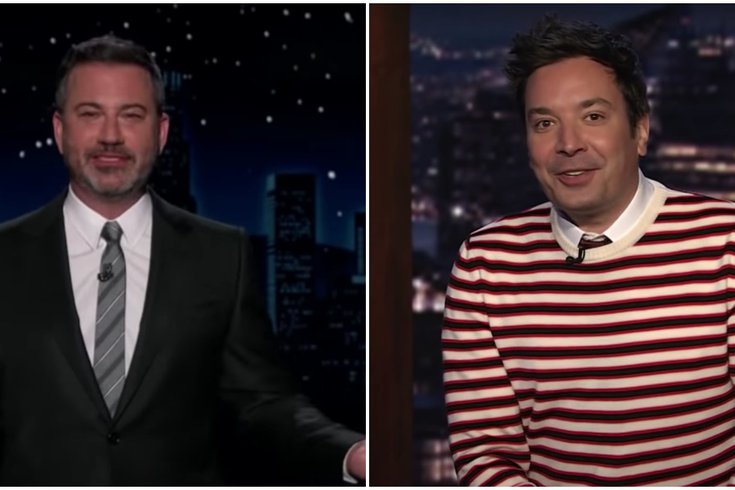 New Jersey legalized recreational marijuana earlier this week — more than three months after residents voted in favor of the change on a ballot referendum.

The news naturally found its way onto the late night shows Tuesday.

Jimmy Kimmel addressed the issue during his opening monologue on "Jimmy Kimmel Live!" saying "there's no way that whoever designed their state flag wasn't high when they did it."

"I mean, look at this, you got two women," Kimmel said. "One's got a hat on a stick. You've got a shield, a horse's head, a knight's helmet or something like that, and a backdrop the color of my mom's kitchen from 1981. They should make rolling papers out of this flag."

Jimmy Fallon, host of "The Tonight Show," addressed the topic by pretending to have Bruce Springsteen call onto the show. As Fallon interviewed The Boss, an offscreen impersonator mimicked Springsteen's voice, which is known for being rough and difficult to understand at times.

Fallon struggled to understand the Springsteen impersonator's answers to his questions. As the conversation transitioned to Springsteen's new podcast with former President Barack Obama, an impersonator of Bob Dylan, known for having a nasally voice, joined the interview.

Fallon listened as the two music legends babbled incoherently before closing his monologue. "Laughing Bob Dylan and Bruce Springsteen, everybody. It's amazing that we got them on the line."

After a lengthy back-and-forth in the state legislature, Gov. Phil Murphy signed three bills Monday to launch the cannabis industry and decriminalize adult-use pot for adults over age 21. New Jersey is now one of 13 states to legalize recreational marijuana.

About two-thirds of New Jersey residents voted in favor of marijuana legalization on a ballot referendum in last November's election. The referendum followed failed legislative efforts over the past few years.