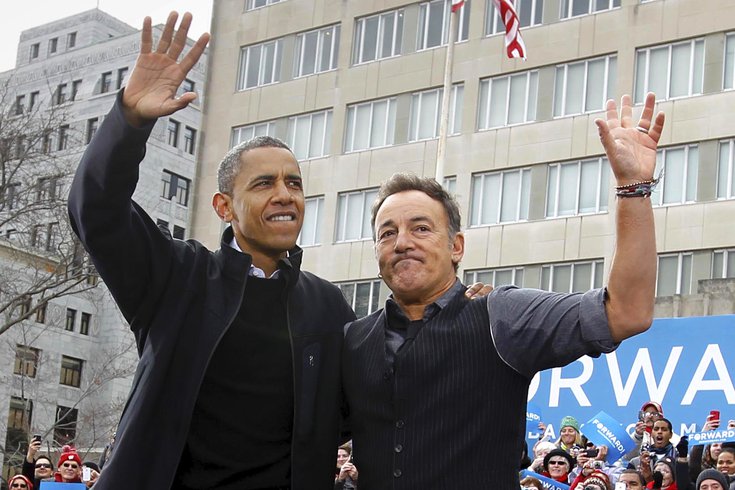 Former President Barack Obama and musician Bruce Springsteen are co-hosting a new Spotify podcast that brings the two friends together for a series of casual conversations about tough topics, like race, fatherhood, marriage and "the future of America."

The first two episodes of the eight-episode podcast series titled "Renegades: Born in the USA" premiered Monday on the streaming service.

Obama, 59, and Springsteen, 71, first met during a series of campaign performances Springsteen and the E Street Band did for Obama during the 2008 presidential race.

"Renegades: Born in the USA," was recorded at Springsteen's home in Colts Neck, New Jersey, where the musician has a private recording studio. The conversations took place over a few days in 2020, prior to news breaking about Springsteen's November DUI arrest earlier this month.

In its announcement of the podcast , Sportify said rock star and the former president will cover the divided state of America and "offer a vision of how we can all move forward together."

"On the surface, Bruce and I don't have a lot in common," Obama says during the first episode. "He's a white guy from a small town in Jersey and I'm a Black guy of mixed race born in Hawaii ... He's a rock and roll icon. I'm a lawyer and politician — not as cool ... But over the years we've found that we've got a shared sensibility — about work, about family, and about America. In our own ways Bruce and I have been on parallel journeys, trying to understand this country that's given us both so much."

Last year, I sat down with my good friend Bruce @Springsteen for a long and meaningful conversation that touched on so much of what we’re all dealing with these days. I’m excited to share it with you over the next few weeks: https://t.co/sQACD08AWx pic.twitter.com/biMoxCLhAG

Their shared sensibility comes from the two men's beginnings as "outsiders," they explain in first episode. Springsteen delves into his working-class upbringing in Freehold, where his parents struggled with unemployment and mental illness. Obama shares what it is was like to grow up as a Black person of mixed race in Hawaii, where he was often mistook for someone of Hawaiian descent.

There is music talk, too, like Springsteen telling Obama about his first guitar.

"Guitars were cheap. I could actually work a job, which I did. And I saved up $18, bought a cheap guitar. Then I started to learn some Beatles stuff, I learned 'Twist and Shout'," Springsteen says before strumming a few chords for Obama.

Listen to the first episode of "Renegades: Born in the USA" below.