Bacon Brothers in harmony on and off the stage

For Philly's Michael and Kevin, it’s nothing but brotherly love all the way

Historically speaking, the pop music landscape is littered with the bruised feelings (and sometimes bodies) of musical siblings.

From big-band bigwigs Tommy and Jimmy Dorsey to Don and Phil Everly, from the Kinks’ Ray and Dave Davies to Liam and Noel Gallagher of Oasis, familial fighting has been a familiar story line in the pop realm. But for Philly’s own The Bacon Brothers—TV/film composer Michael and superstar actor Kevin--it’s nothing but brotherly love all the way.

“We really haven’t had too many problems with that,” offered the older-by-nine-years Michael during a recent three-way phone chat occasioned by the duo’s upcoming gigs at Jefferson University (March 24) and Golden Nugget Atlantic City (March 25).

“Sure, we get on each other’s nerves occasionally, but I think one of the things all those brothers [have in common is they] are very close in age. Don and Phil Everly were probably a year or two apart, and…boys are competitive. As they grow up, they roughhouse, which sets the tone. In our case, because I’m so much older than Kevin, it just never was that kind of relationship. And I also think we have a value system that puts family up there pretty high.”

That, he added, “totally outweighs any of the things that might drive a wedge between us.” 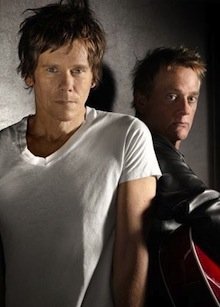 Music was always a part of the brothers’ life in the Center City household whose patriarch was legendary city planner Edmund Bacon, who is credited with dragging the city out of its 19th-century parochialism in terms of land use and aesthetics.

“We both grew up listening to the radio, listening to records,” said Kevin, who, in May, will be seen as the title character of the upcoming Amazon series “I Love Dick,” an edgy comedy about relationships, sex, and feminism.

“I remember when FM rock wasn’t an option, so I would listen to WFIL and WDAS, WIBG (three nationally influential stations back when the AM dial ruled the radio roost). It was just always around and always there. Mostly soul music until the ‘British Invasion,’ which my brother introduced me to. Then WMMR started playing album rock.”

In the late-‘60s, when ‘MMR was beginning to capture a generation of young people who wanted more out of music than what Top 40 radio was offering, Michael launched his career as a performer, playing in a duo called Good News.

“Michael, when I was a little kid, was already playing in clubs and [coffeehouses] throughout Philadelphia,” recalled Kevin.

“So he was entrenched in the Philly music scene. And my parents would bring me to shows. It was a big part of our lives.”

When we put the band together…we looked at each other and said, 'we really have to look into ourselves, because people are going to be [paying] money to see us, and we want to put on a really good show,'" he said.

According to Michael, that the siblings have spent more than two decades making music together is certainly no surprise. Instead, he insisted, it was fated to be.

“Ever since Kevin was born, it really felt like we were going to be playing music and writing songs together. By the time he was old enough to speak, we were already on our way. I’d be playing guitar and he’d be banging on a can or something like that. I suppose we wrote our first song together maybe when he was about 10 years old.”

Their early compositional efforts were, explained Michael, externally inspired: An early tune was called “Preppie Rock,” and another was about roller disco. But in the mid-‘90s, when it came time to get serious, Michael suggested another direction.

“When we put the band together…we looked at each other and said, 'we really have to look into ourselves, because people are going to be [paying] money to see us, and we want to put on a really good show,'" he said.

"So we went more in terms of the style I call ‘confessional,’ where you’re really looking more at your own experiences and trying to fit them into a song and make them universal so that people identify with the song through you and your life, and it touches other people and their lives.”