Bad For You - McDonald’s Grand Mac and Mac Jr.

Have it your way at McDonald's, too 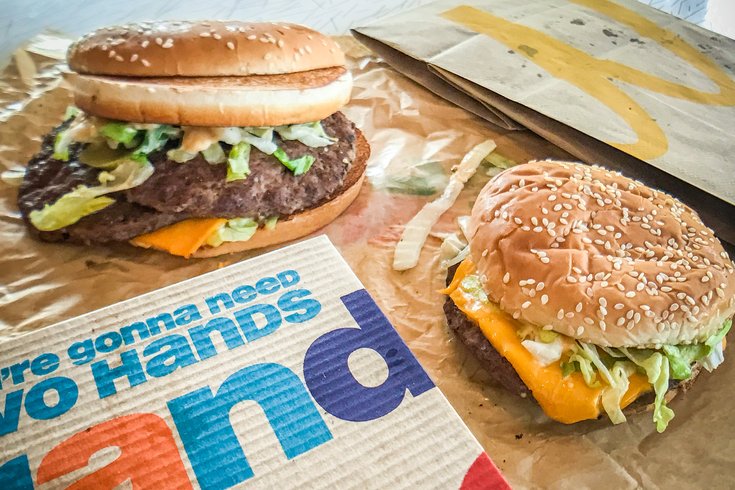 If there’s a Mount Rushmore of fast food—which there will be, if Trump approves my request for federal funding—there’s no question that McDonald’s Big Mac would be on it.

Invented in 1967 by Jim Delligatti, a Uniontown, Pa.-based McDonald’s franchise owner who recently passed away, the Big Mac went on to appear on their menus nationwide and become one of the most iconic burgers in the world. It became so famous that its advertising jingle was just a list of ingredients—”twoallbeefpattiesspecialsaucelettucecheesepicklesonionsonasesameseedbun.” There’s even a Big Mac museum in North Huntingdon, Pa. that owns the world’s #1 largest Big Mac statue. (I own #2 and #4.)

Alas, with fast food sales steadily dwindling, the classic burger’s popularity has fallen as well. Last year, a top McDonald’s franchisee figured out that only one-in-five millennials had ever eaten a Big Mac, which our own Daniel Craig struggled to wrap his head around in his celebration of the sandwich.

Craig noted, “There's a reason McDonald's hasn't (yet) been featured in PhillyVoice's ‘Bad For You’ column, which reviews often outlandish junk food invention. The chain, for the most part, avoids those sorts of gimmicky remixes.” 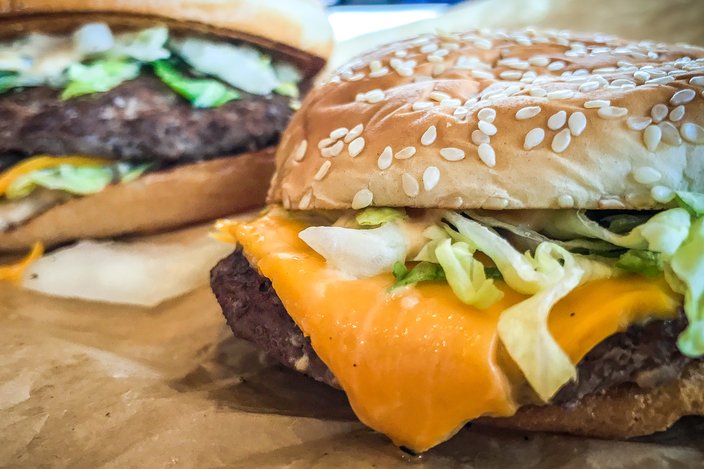 That was until last week, when McDonald’s released not one – but two new, gimmicky remixes: the Grand Mac and Mac Jr.


The Grand Mac is a larger version of the standard Big Mac sandwich, with ⅓ pound of beef overall on a bigger bun with an extra slice of cheese. It has previously been released periodically in Europe and also last year in Japan. The Mac Jr., not to be confused with Little Mac, is a comparatively tiny version of the original that scraps the second burger and the middle “club slice” of bread. It has one slice of cheese.

Making a larger version of a Big Mac makes sense, as fast food chains continue to fight the heftier meals of “fast casual” restaurants like Shake Shack and Five Guys. However, I found it peculiar that McD’s released the $2 Mac Jr. alongside it. At our local McDonald’s, you can add Big Mac “secret sauce” to any item for $.49, which I assume is available everywhere. That means you can order a hamburger for $1 then add sauce and get almost the same item as a Mac Jr., sans sesame seed bun for 50 cents less. You can order a $1.49 double cheeseburger and add sauce, giving you an even bigger burger for almost the same price. 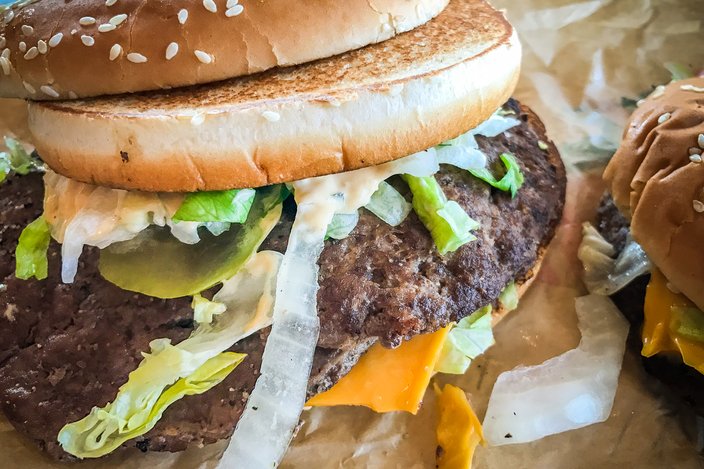 This burger is so messy, it's plausible whoever assembled it had a hard time finding the space between the two beef patties for the positioning of the signature third bun.

Perhaps I have been listening to too much Alex Jones, but it appears to me that McDonald’s released the Mac Jr. as a safety net, if they received bad publicity over the Grand Mac. Remember the public outcry after “Super Size Me”’s 2004 release, which caused the company to end their “supersize” version of drinks and fries? With the option of a smaller, “healthier” version in the Mac Jr., it makes the larger Grand Mac somewhat bulletproof. From a PR standpoint, they did provide the public with an alternative option. Regardless, there has been little public outcry, thus far.

The Grand Mac is a slam dunk. It’s almost cheating, as McDonald’s took one of the best burgers of all time and made it proportionally larger. With the Triple Double Crunchwrap we reviewed last year, simply adding double the amount of ingredients was a risk, albeit one that happened to deliciously pay off. With the Grand Mac, there’s roughly still the same amount of each ingredient in each bite. Now, there’s just more of them. The added slice of cheese is definitely a richer addition, and the Grand Mac is swimming in “secret sauce,” but with the added bulk of bread and lettuce, it all blends nicely. The perfection of tangy and sweet spices in the “secret sauce” truly is one of fast food’s greatest creations.

The worst thing I can say about the Grand Mac is the messiness. While the Big Mac used to claim to big a two-handed burger, this one actually is. That, combined with the added lubrication of the extra sauce, means this bad boy is more or less falling apart in your hands halfway through. There is a piece of wax paper wrapped around à la some fancier burger joints, but as we all know, that does very little in keeping your hands free from sauce.

On the flip side is the Mac Jr., whose single burger and bun is a perfectly tidy item that still holds true to the taste of the original. While the Grand Mac comes in a larger version of the Big Mac box, the Mac Jr. only uses a paper wrap like a standard burger, but, in a sense, it is a standard burger. Still, a solid choice, though, if you can do without the sesame seed bun, you can “hack” the menu for a better deal.

Verdicts: For around a dollar more than a regular Big Mac, the Grand Mac is an incredible taste and deal. I’m sad because I will no longer have an excuse to eat three in a week. My arteries, however, are happy. As for its smaller sibling, the Mac Jr. may be a conspiracy, but it's a tasty burger, nonetheless.