Once told what they sort of resemble, the image cannot be unseen 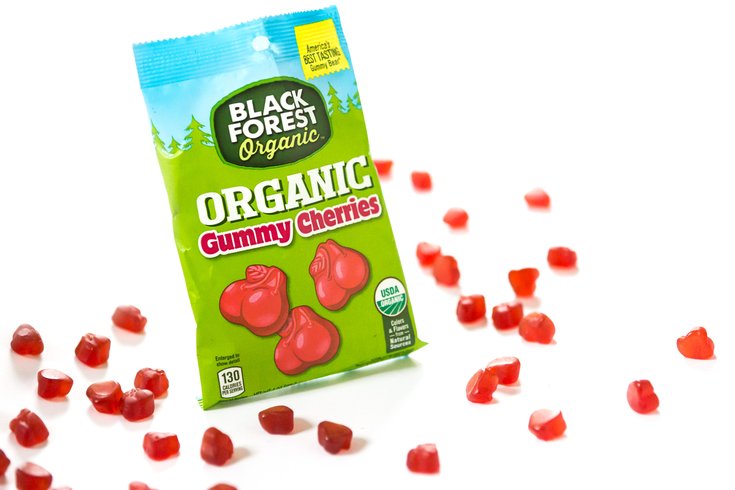 The Black Forest Organic, ORGANIC Gummy Cherries. You couldn't not know they're organic.

In these controversial times, if there’s anything we can all agree on, it’s that 2017 is the best time for gummy-shaped things. You can get anything gummy: gummy turkey legs, gummy bacon, gummy haggis and even a 26-pound gummy “Party Python.” For your enemies, there’s the infamous sugar-free Haribo gummies which will wreak havoc on their stomachs. There’s also gummies with weed in them, though not (legally) in Philly.

If you can dream it, you can gummy it!

As a licensed-and-practicing gummy aficionado, I often frequent the gummy section of the candy aisle. A while back, I was in Rite Aid checking out the usual mix of bears, worms and s’ghetti, when I was stopped in my tracks by the packaging of a product I had never seen before — Black Forest Organic Gummy Cherries.

I have seen gummy cherries before, but these were no ordinary gummies. These were gummy testicles.

Obviously, they are cherries. There’s a stem and a leaf and everything. But if you asked the average male teenager to draw a picture of testicles, it would look like "deez."

Was I crazy? Was this some sort of Freudian thing that said more about me? I asked the employee at the counter and he said that other customers have also pointed that out, which meant there were other juvenile adults out there.

As surprised as I was by the candy packaging, I didn’t purchase them that night – something I heavily regretted later on when they were all sold out. What was I thinking? Did I miss out on a great, terrible Bad For You opportunity? For weeks, I would check again, to no avail. I feared that perhaps Black Forest was alerted and they had been taken off the market.

Thankfully, that was not the case, as a revisit revealed that they had only one bag left. This meant they were selling like testicle-shaped hotcakes. Were people buying them because of their unique shape? Do they subconsciously catch more people’s attention? Their Gummy Worms directly next to the Cherries on the shelf were fully-stocked, even though after seeing the former, the worm shape now seems suspect.

I doubt very much that Black Forest intentionally made the cherries look like testicles, but how could no one else working there have seen this? Wouldn’t this have gone through multiple people? Did no employee want to be the one to speak up and say, “Excuse me, these clearly look like balls?” 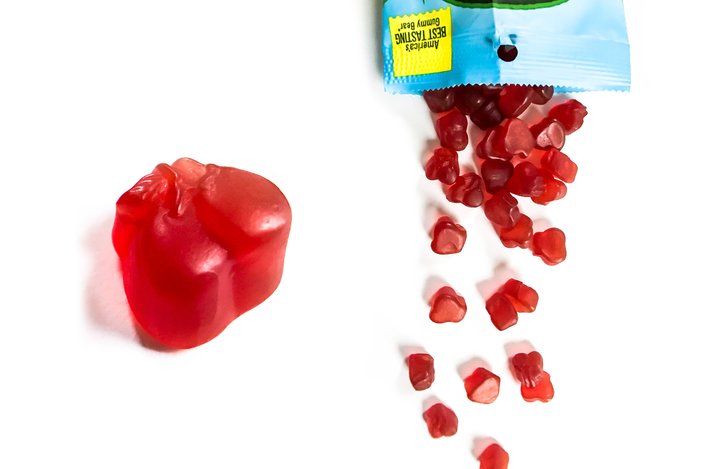 They've got the organic thing going for them. At least there's that?

I polled various male and female friends as to what they saw on the package. The answer was mostly “testicles,” with the occasional “butts” thrown in. A few didn’t see anything unusual, until I told them, at which point it could not be unseen. The Internet must agree with me as I came across this meme which pretty much sums up my thoughts.

Upon actually opening the package, the gummy cherries lose a lot of their testiclivity and end up looking like misshapen blobs, much like the James Harden Weird Beards we reviewed last year. Some of these blobs are close to cherries and few look like what’s on the package. Apparently, only when the cherries are “Enlarged to show detail” do they begin to take other forms.

Taste-wise, I would say that these are more akin to fruit snacks than to standard gummy bears. The cherry aroma of the bag is very pleasant. There’s a slight sourness to the cherries, which is not overpowering and are generally more tart than a regular gummy bear. The texture is a lot chewier than cherries or bears like Haribo are, and the inside is very sticky and dense. I’m not sure what classifies a fruit snack other than having been made with real fruit juice – which this one only slightly is – using organic lemon juice concentrate and also some black carrot juice for color. In my mind, I can’t escape that this should be a fruit snack. (However, Black Forest does sell their own fruit snacks that are made with various kinds of juices and purees.)

Like almost all of Black Forest’s snack foods, Gummy Cherries are certified organic by the USDA, something that certainly gives them a unique place amongst other gummies for the health conscious consumer. For instance, their gummy bears are grass-fed, cage-free and born in captivity.

Verdict: As a conversation piece, Black Forest Organic Gummy Cherries is a great buy. As a food, it’s about average for a fruit snack-esque candy, though not on par with Haribo’s Twin Cherries. It’s also not as good as “bofa.”

(Editor’s Note: See Urban Dictionary for the definition of “bofa.”)